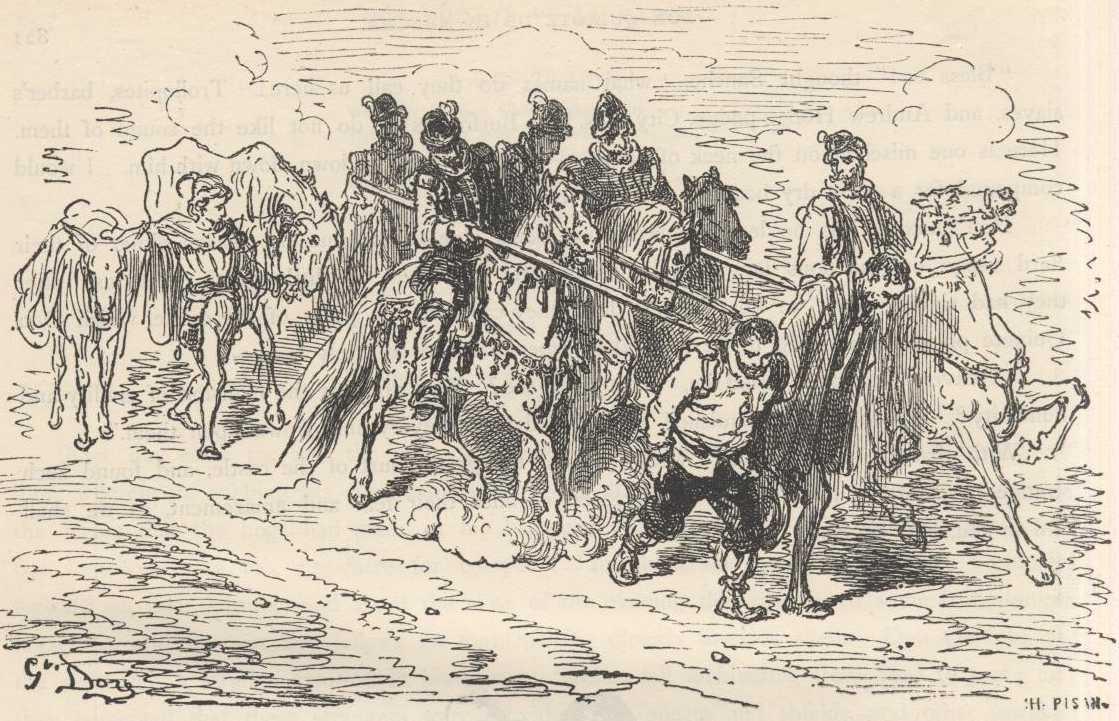 The horsemen dismounted, and, together with the men on foot, without a moment's delay taking up Sancho and Don Quixote bodily, they carried them into the court, all round which near a hundred torches fixed in sockets were burning, besides above five hundred lamps in the corridors, so that in spite of the night, which was somewhat dark, the want of daylight could not be perceived. In the middle of the court was a catafalque, raised about two yards above the ground and covered completely by an immense canopy of black velvet, and on the steps all round it white wax tapers burned in more than a hundred silver candlesticks. Upon the catafalque was seen the dead body of a damsel so lovely that by her beauty she made death itself look beautiful. She lay with her head resting upon a cushion of brocade and crowned with a garland of sweet-smelling flowers of divers sorts, her hands crossed upon her bosom, and between them a branch of yellow palm of victory. On one side of the court was erected a stage, where upon two chairs were seated two persons who from having crowns on their heads and sceptres in their hands appeared to be kings of some sort, whether real or mock ones. By the side of this stage, which was reached by steps, were two other chairs on which the men carrying the prisoners seated Don Quixote and Sancho, all in silence, and by signs giving them to understand that they too were to be silent; which, however, they would have been without any signs, for their amazement at all they saw held them tongue-tied. And now two persons of distinction, who were at once recognised by Don Quixote as his hosts the duke and duchess, ascended the stage attended by a numerous suite, and seated themselves on two gorgeous chairs close to the two kings, as they seemed to be. Who would not have been amazed at this? Nor was this all, for Don Quixote had perceived that the dead body on the catafalque was that of the fair Altisidora. As the duke and duchess mounted the stage Don Quixote and Sancho rose and made them a profound obeisance, which they returned by bowing their heads slightly. At this moment an official crossed over, and approaching Sancho threw over him a robe of black buckram painted all over with flames of fire, and taking off his cap put upon his head a mitre such as those undergoing the sentence of the Holy Office wear; and whispered in his ear that he must not open his lips, or they would put a gag upon him, or take his life. Sancho surveyed himself from head to foot and saw himself all ablaze with flames; but as they did not burn him, he did not care two farthings for them. He took off the mitre and seeing painted with devils he put it on again, saying to himself, "Well, so far those don't burn me nor do these carry me off." Don Quixote surveyed him too, and though fear had got the better of his faculties, he could not help smiling to see the figure Sancho presented. And now from underneath the catafalque, so it seemed, there rose a low sweet sound of flutes, which, coming unbroken by human voice (for there silence itself kept silence), had a soft and languishing effect. Then, beside the pillow of what seemed to be the dead body, suddenly appeared a fair youth in a Roman habit, who, to the accompaniment of a harp which he himself played, sang in a sweet and clear voice these two stanzas:

At this point one of the two that looked like kings exclaimed, "Enough, enough, divine singer! It would be an endless task to put before us now the death and the charms of the peerless Altisidora, not dead as the ignorant world imagines, but living in the voice of fame and in the penance which Sancho Panza, here present, has to undergo to restore her to the long-lost light. Do thou, therefore, O Rhadamanthus, who sittest in judgment with me in the murky caverns of Dis, as thou knowest all that the inscrutable fates have decreed touching the resuscitation of this damsel, announce and declare it at once, that the happiness we look forward to from her restoration be no longer deferred."

"Ho, officials of this house, high and low, great and small, make haste hither one and all, and print on Sancho's face four-and-twenty smacks, and give him twelve pinches and six pin thrusts in the back and arms; for upon this ceremony depends the restoration of Altisidora."

On hearing this Sancho broke silence and cried out, "By all that's good, I'll as soon let my face be smacked or handled as turn Moor. Body o' me! What has handling my face got to do with the resurrection of this damsel? 'The old woman took kindly to the blits; they enchant Dulcinea, and whip me in order to disenchant her; Altisidora dies of ailments God was pleased to send her, and to bring her to life again they must give me four-and-twenty smacks, and prick holes in my body with pins, and raise weals on my arms with pinches! Try those jokes on a brother-in-law; 'I'm an old dog, and "tus, tus" is no use with me.'"

"Thou shalt die," said Rhadamanthus in a loud voice; "relent, thou tiger; humble thyself, proud Nimrod; suffer and he silent, for no impossibilities are asked of thee; it is not for thee to inquire into the difficulties in this matter; smacked thou must be, pricked thou shalt see thyself, and with pinches thou must be made to howl. Ho, I say, officials, obey my orders; or by the word of an honest man, ye shall see what ye were born for."

At this some six duennas, advancing across the court, made their appearance in procession, one after the other, four of them with spectacles, and all with their right hands uplifted, showing four fingers of wrist to make their hands look longer, as is the fashion now-a-days. No sooner had Sancho caught sight of them than, bellowing like a bull, he exclaimed, "I might let myself be handled by all the world; but allow duennas to touch me—not a bit of it! Scratch my face, as my master was served in this very castle; run me through the body with burnished daggers; pinch my arms with red-hot pincers; I'll bear all in patience to serve these gentlefolk; but I won't let duennas touch me, though the devil should carry me off!"

Here Don Quixote, too, broke silence, saying to Sancho, "Have patience, my son, and gratify these noble persons, and give all thanks to heaven that it has infused such virtue into thy person, that by its sufferings thou canst disenchant the enchanted and restore to life the dead."

The duennas were now close to Sancho, and he, having become more tractable and reasonable, settling himself well in his chair presented his face and beard to the first, who delivered him a smack very stoutly laid on, and then made him a low curtsey.

In fine, all the duennas smacked him and several others of the household pinched him; but what he could not stand was being pricked by the pins; and so, apparently out of patience, he started up out of his chair, and seizing a lighted torch that stood near him fell upon the duennas and the whole set of his tormentors, exclaiming, "Begone, ye ministers of hell; I'm not made of brass not to feel such out-of-the-way tortures."

At this instant Altisidora, who probably was tired of having been so long lying on her back, turned on her side; seeing which the bystanders cried out almost with one voice, "Altisidora is alive! Altisidora lives!"

Rhadamanthus bade Sancho put away his wrath, as the object they had in view was now attained. When Don Quixote saw Altisidora move, he went on his knees to Sancho saying to him, "Now is the time, son of my bowels, not to call thee my squire, for thee to give thyself some of those lashes thou art bound to lay on for the disenchantment of Dulcinea. Now, I say, is the time when the virtue that is in thee is ripe, and endowed with efficacy to work the good that is looked for from thee."

To which Sancho made answer, "That's trick upon trick, I think, and not honey upon pancakes; a nice thing it would be for a whipping to come now, on the top of pinches, smacks, and pin-proddings! You had better take a big stone and tie it round my neck, and pitch me into a well; I should not mind it much, if I'm to be always made the cow of the wedding for the cure of other people's ailments. Leave me alone; or else by God I'll fling the whole thing to the dogs, let come what may."

Altisidora had by this time sat up on the catafalque, and as she did so the clarions sounded, accompanied by the flutes, and the voices of all present exclaiming, "Long life to Altisidora! long life to Altisidora!" The duke and duchess and the kings Minos and Rhadamanthus stood up, and all, together with Don Quixote and Sancho, advanced to receive her and take her down from the catafalque; and she, making as though she were recovering from a swoon, bowed her head to the duke and duchess and to the kings, and looking sideways at Don Quixote, said to him, "God forgive thee, insensible knight, for through thy cruelty I have been, to me it seems, more than a thousand years in the other world; and to thee, the most compassionate upon earth, I render thanks for the life I am now in possession of. From this day forth, friend Sancho, count as thine six smocks of mine which I bestow upon thee, to make as many shirts for thyself, and if they are not all quite whole, at any rate they are all clean."

Sancho kissed her hands in gratitude, kneeling, and with the mitre in his hand. The duke bade them take it from him, and give him back his cap and doublet and remove the flaming robe. Sancho begged the duke to let them leave him the robe and mitre; as he wanted to take them home for a token and memento of that unexampled adventure. The duchess said they must leave them with him; for he knew already what a great friend of his she was. The duke then gave orders that the court should be cleared, and that all should retire to their chambers, and that Don Quixote and Sancho should be conducted to their old quarters.