“Christmas won't be Christmas without any presents,” grumbled Jo, lying on the rug.

“It's so dreadful to be poor!" sighed Meg, looking down at her old dress.

"I don't think it's fair for some girls to have plenty of pretty things, and other girls nothing at all," added little Amy, with an injured sniff.

"We've got Father and Mother, and each other," said Beth contentedly from her corner.

Protagonist Jo March’s character is based on Alcott herself and her sisters form the basis for her other characters whose adventures and lives she recounts in this tale set in New England during the American Civil War. Highly successful upon publication and subsequently inspiring numerous adaptations to the screen, Little Women is still one of the most popular novels read by people of all ages. Alcott wrote many other highly acclaimed works in her time and was an active supporter of the women’s suffrage and abolition movements, but it is her wholesome tales penned from her own experiences growing up that she is best remembered.

Born on 29 November 1832 in Germantown (now part of Philadelphia), Pennsylvania, Louisa May Alcott was the second daughter of Abigail `Abba’ May (1800-1877), women’s suffrage and abolitionist advocate and Amos Bronson Alcott (1799-1893), transcendentalist philosopher and education and social reformer who helped found the controversial and pioneering Temple School in Boston, Massachusetts in 1834. Amos played an active role in the education of Louisa and her three sisters Anna, Elizabeth, and May.

After a failed experiment of living at the communal Fruitlands farm, a result of which was Alcott’s Transcendental Wild Oats (1876), the family moved to `Hillside’ in Concord, Massachusetts. Alcott had become friends with fellow transcendentalists Ralph Waldo Emerson, whose vast library she regularly frequented, and Henry David Thoreau, whom she accompanied on walks in the countryside. Margaret Fuller and Nathaniel Hawthorne and his family were also amongst the Alcott’s varied and intellectual social circle of New England.

By 1858 the Alcotts were living at The Orchard House on Lexington Road in Concord, which is now a National Historic Landmark. Surrounded by acres of apple trees, the rambling and dignified home would be the setting for her future novel Little Women. Its sequels are Good Wives (1869), Little Men (1871), and Jo’s Boys (1886).

Amos’ idealist and unconventional pursuits were not especially lucrative so around the age of fifteen Alcott started to contribute to the family income with various positions including teacher, seamstress, and servant which inspired her later novel Work: A Story of Experience (1873). While she kept a journal from a very early age, she was also encouraged by family and friends to write poems, sketches and plays, acted out by her and her sisters. Some of her first poems were published anonymously or under the pseudonym `A.N. Barnard’ and her first collection of works, written for Emerson’s daughter Ellen, Flower Fables was published in 1854.

In 1856 Elizabeth Alcott died of scarlet fever, and Anna married. Louisa and her mother were a great support to each other in this time of loss and change. She was writing for the Atlantic Monthly when the Civil War broke out and she enlisted as a nurse and went to the Union Hospital in Washington, D.C. in 1862. Hospital Sketches (1863) is a result of her letters home and was critical to her success as an author. She had contracted typhoid fever during her service and the treatment for it which included mercury would hamper her health for the rest of her life.

Alcott became involved with the same reform movements her mother was active in including abolition of slavery and women’s rights. She was also an accomplished writer now achieving wide acclaim and supporting the family financially. Works to follow Sketches were The Rose Family: A Fairy Tale (1864), Moods (1865), and the potboiler A Long Fatal Love Chase (1866). Her publisher Thomas Niles requested `a girl’s story’ from her and the result was Little Women, followed by further development of the March sisters’ lives in Good Wives (1869). An Old-fashioned Girl (1870) was one of her next publications followed by Little Men (1871), Eight Cousins (1875) and its sequel Rose in Bloom (1876). Other Alcott works include A Modern Mephistopheles (1877), Under the Lilacs (1879), and Jack and Jill (1880).

Alcott’s mother Abigail had died in 1877 and in 1878 her sister May married and had a daughter named after her, Louisa `Lulu’ May. May died a year later. Shortly after Alcott moved to Boston where she continued to write novels including Jo’s Boys (1886), Lulu’s Library, written between 1886 and 1888 for her niece Lulu, and A Garland for Girls (1888).

“These stories were written for my own amusement during a period of enforced seclusion. The flowers which were my solace and pleasure suggested titles for the tales and gave an interest to the work.

If my girls find a little beauty or sunshine in these common blossoms, their old friend will not have made her Garland in vain.” (Alcott from the Preface of A Garland for Girls)

Forum Discussions on Louisa May Alcott

Was Louisa May Alcott a feminist?

I recently heard someone describe Louisa May Alcott as a feminist. I wondered. All the surviving March girls get married and have children. If she is a feminist, it ends up as using the word "feminist" to mean any woman who is not a complete doormat. Surely it means a certain critique as well?...

Posted By Jackson Richardson in Alcott, Louisa May || 5 Replies

I was reading a thing about Winona Ryder in IMDB.com and it mentioned that her parents were pals with Allen Ginsberg. It talked about this book which Ginsburg edited which apparently contained a piece by Alcott. Her parents were friends of Beat poet Allen Ginsberg and once edited a book called "Shaman Woman Mainline Lady," an anthology of writings on the drug experience in literature, which included one piece by Louisa May Alcott. Winona Ryder was later to star as Jo in this author's Little Women (1994). I wondered if anybody knew what the piece was....

Posted By Captain Pike in Alcott, Louisa May || 1 Reply

There's a book by the author which involves a man who goes into the woods, becomes a poet, comes back, and gets the girl. Which book was this?...

Posted By goaliepride in Alcott, Louisa May || 1 Reply

I was reading some reviews on the internet of Rose in Bloom. One said that the last paragraph in the book made her gag because it was too "flowery and sentimental".This is the paragraph: "Please God, we will!" he answered fervently and, looking at her as she stood there in the spring sunshine, glowing with the tender happiness, high hopes, and earnest purposes that make life beautiful and sacred, he felt that now the last leaf had folded back, the golden heart lay open to the light, and his Rose had bloomed." I dont think its to flowery or anything I think its sweet and besides thats just her way of writing. Do you guys think Alcotts writing is too flowery cuz I dont. Tell me what you thi...

Your favorite Louisa May Alcott Book?

Just wondering what your favorite LMA book was if you ever read any. Mine is Rose in Bloom which is a sequel to Eight Cousins. Oh and if your favorite book is Little Women please say why cause I know lots of people love that book (I love it too)...

When I first read "Little Woman" I thought it was the most boring book on the planet. Then, I started reading it one day because I didn't have any books to read. I got interested, so I kept on reading. Now, I'm only half way through, so, can I ask you something? Does Joe marry the proffeser like Teddy predicted? If she does, what do you think about it? Do you think she should have married Teddy or the proffeser?...

Posted By Debrah Grace in Alcott, Louisa May || 3 Replies

Which Little Woman do you dislike?

I was just thinking of my favourite characters in the 'Little Woman' book, and decided to make a new thred of 'Which Little Woman character do you dislike?' I only do this out of my curiosity, and hope that i didn't offend anyone. Turrah!...

Posted By Kyuyi in Alcott, Louisa May || 23 Replies

Posted By Helena_of_verona in Alcott, Louisa May || 32 Replies 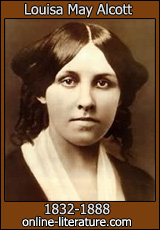 Related links for Louisa May Alcott

Here is where you find links to related content on this site or other sites, possibly including full books or essays about Louisa May Alcott written by other authors featured on this site.