Suddenly the dressing-room door opened and the maid came out by herself, carrying bundles. He stopped her and asked how her mistress was. The woman laughed and said that she was quite well, but that he must not disturb her, for she wished to be left alone. And she passed on. One idea alone filled Raoul's burning brain: of course, Daae wished to be left alone for him! Had he not told her that he wanted to speak to her privately?

Hardly breathing, he went up to the dressing-room and, with his ear to the door to catch her reply, prepared to knock. But his hand dropped. He had heard a man's voice in the dressing-room, saying, in a curiously masterful tone:

"Christine, you must love me!"

And Christine's voice, infinitely sad and trembling, as though accompanied by tears, replied:

Daae's triumphant night is marked by shadowy events surrounding the "Opera Ghost"; her and Raoul are led down into the dark depths of Paris's Opéra Garnier and the haunted realm of the human heart, their love tested over and over again. Set in the 19th century, Leroux's now most-famous novel, written in gripping journalistic style, was first serialised in the French newspaper Le Gaulois in 1909 and other newspapers in Europe and North America. It was first translated to English in 1911 by Alexander Teixeira de Mattos (1865-1921). A notable example in the Gothic genre with illustrations by André Castaigne, it was not popular when first published. However the 1925 black and white film starring Lon Chaney as Erik "The Angel of Music" and Mary Philbin as Christine Daae brought the novel much over-due attention. Phantom has now been translated to numerous languages and inspired many adaptations to film and stage, Andrew Lloyd Webber's musical version being the longest-running New York Broadway production to-date.

Gaston Louis Alfred Leroux was born on 6 May 1868 in Paris, France, son of Marie Alphonsine and Julien Leroux. His grandparents owned a ship-building company in the small coastal village of St. Valery-en-Caux in Normandy, France, where he resided with his parents. He loved the life of sailing and fishing, and early on knew he wanted to become a writer. Young Gaston attended school in Caen, writing poetry, short stories, and studying the works of Victor Hugo and Alexandre Dumas pere. He then travelled to Paris where he studied law. He obtained his degree in 1889 but at that point, after years of study, he was no longer interested in the profession, although his knowledge would serve him well in future writing.

He next obtained a position as court reporter, drama critic and journalist, travelling abroad and writing articles for L'Echo de Paris and Le Matin. One of his articles described the 1896 events surrounding the death of a patron at the Paris Opera House when one of the chandelier's counterweights fell. After his father's death in 1889 Gaston was left a considerable inheritance, which he promptly went about spending, acquiring a taste for good food and wine and gambling. In 1899 he married Marie Lefranc, but it was not to last. While in Switzerland in 1902 he met Jeanne Cayatte with whom he had two children, Alfred Gaston and Madeleine. Gaston and Jeanne married in 1917.

As a noted reporter, Leroux attended trials, interviewed prisoners, and witnessed executions by guillotine, but he also travelled the world to such far away ports as Russia, Asia, and Africa and thus acquired a first-hand view of some remarkable events of his time. While he also dabbled as playwright he had also been working on novels for many years, such as Seeking of the Morning's Treasures (1903) and his first "locked room mystery" featuring reporter Joseph Rouletabille The Mystery of the Yellow Room (1908). The seven book series also includes The Perfume of the Lady in Black (1909) and The Secret of the Night (1914). His first novel in his Chéri-Bibi series was published in 1913, followed by such titles as The Veiled Prisoner (1923) and The Dark Road (1924). Gaston Leroux was made a Chevalier de la Legion d'honneur in 1909.

...Gioachino Cocchi aka le comte de Saint Germain, C.W. Gluck, F.M.Grimm, Chastellux and J.J.Rousseau. "They" -alltogether-will certainly "haunt" opera to eternity, there is however specific evidence as well: "Don Juan triumphant" points to Gluck's "Don Giovanni"-defined presently as a "ballet"-produced in Vienna 1761, ie early in Gluck's reformation period (1761-67), ie Leroux expresses a wish for his triumphant return . The phantom's persian companion-guard points furthermore to the "Gullistan" (Persia) history of the family, including our hero's Nikita "K" ancestor, himself as well as his grandson (Stroganov) who spent sometime in Persia. see http://www.online-literature.com/fo... 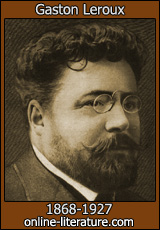 Here is where you find links to related content on this site or other sites, possibly including full books or essays about Gaston Leroux written by other authors featured on this site.