It was on a bitterly cold and frosty morning, towards the end of the winter of '97, that I was awakened by a tugging at my shoulder. It was Holmes. The candle in his hand shone upon his eager, stooping face, and told me at a glance that something was amiss.

"Come, Watson, come!" he cried. "The game is afoot. Not a word! Into your clothes and come!"--from "The Adventure of the Abbey Grange"

Inspired by Sir Walter Scott, Robert Louis Stevenson, Edgar Allan Poe, Guy de Maupassant, and Emile Gaboriau, Arthur Conan Doyle's now-iconic mastermind sleuth and his companion Dr. John H. Watson redefined the detective genre. Conan Doyle's medical training under Dr. Joseph Bell and practical experience as a doctor in several locales and as ship's doctor are the foundation for Holmes's methods of deductive reasoning. "It is an old maxim of mine that when you have excluded the impossible, whatever remains, however improbable, must be the truth."--from "The Adventure of the Beryl Coronet". The Edwardian and Victorian era stories are set in London, England, and places abroad. Sherlock Holmes first appeared in A Study in Scarlet in 1887 and Conan Doyle would write fifty-five more stories and four novels starring Holmes. He wrote many other notable fiction and non-fiction works including The Stark Munro Letters (1895), The Exploits of Brigadier Gerard (1896), The Hound of the Baskervilles (1902), The Lost World (1912), The Coming of the Fairies (1922), and Memories and Adventures (1924-30), many which have been translated to dozens of languages and are still in print today.

Arthur Ignatius Conan Doyle was born on 22 May 1859 in Edinburgh, Scotland, the eldest son born to Roman Catholic parents Mary née Foley (1838-1921) and artist Charles Altamont Doyle (1832-1893). Charles would lead a life troubled by alcoholism and depression; after spending much time in mental institutions, he died in Scotland in 1893. Supported by an uncle, young Arthur's education started in 1868 at the Jesuit preparatory school Hodder in the Ribble Valley of Lancashire, England. He then attended Stonyhurst College, graduating in 1875; next he travelled to the town of Feldkirch in Austria to study at the Jesuit college. At Edinburgh University he studied medicine and met his mentor, professor and doctor Joseph Bell. Conan Doyle worked as doctor's assistant and ship's doctor, travelling to Africa on the steamer Mayumba. He graduated in 1885, publishing his thesis "An Essay Upon the Vasomotor Changes in Tabes Dorsalis". During his years of studies and afterwards he wrote numerous articles and stories for such publications as the Edinburgh Journal, The Lancet, The Pall Mall Gazette, London Society, William Makepeace Thackeray's The Cornhill, and Charles Dickens's All The Year Round. They include "The Captain of the Pole-Star", "The Five Orange Pips", "The Heiress of Glenmahowley", "J. Habakuk Jephson's Statement", and "The Man From Archangel".

In June of 1882 Conan Doyle settled in Southsea, Portsmouth, England, where he opened his own successful medical practice. He continued to write and travelled often to London. In August of 1885 he married Louise Hawkins (1856-1906), with whom he would have two children: daughter Mary Louise (b.1889) and son Alleyne Kingsley (1892-1918). Arthur and Louise honeymooned in Ireland and while Conan Doyle continued to practice medicine he also kept up his prodigious output of fiction. First published in Beeton's Christmas Annual in 1887 and favourably reviewed, A Study in Scarlet was published in book form in 1888. The same year, his first novel The Mystery of Cloomber (1888) was released. Based on the Monmouth Rebellion of 1865, Micah Clark was next published in 1889. It was followed by The Sign of the Four (1890) and The Firm of Girdlestone (1890). The same year that The Adventures of Sherlock Holmes (1891) was published, the Conan Doyles moved to London, settling in South Norwood. In 1892 Louise contracted tuberculosis and the Conan Doyles moved to Hindhead, Haslemere, Surrey where the air was healthier for her. In 1894 Conan Doyle embarked on a lecture tour of the United States and Canada.

In 1900 Conan Doyle served as a doctor at the Longman Hospital during the South African War. His first of many war-related works, The Great Boer War (1900), was followed by The War in South Africa: its Cause and Conduct (1902), which earned him the title Knight bachelor in 1902 from King Edward VII. After serving as military correspondent during the First World War he wrote British Campaign in France and Flanders (1920). He also continued to write fiction including and The Return of Sherlock Holmes (1905). The same year Sir Nigel (1906) was published, Louise died of tuberculosis. A year later, on 18 September 1907 Conan Doyle married Jean Blyth Leckie (1872-1940) with whom he would have three children: Denis (b.1909), Adrian (b.1910), and Jean Lena Annette (b.1912).

For many years Conan Doyle had strayed from his religious upbringing and by the 1920's was profoundly interested in Spiritualism, begun by Swedish mystic and philosopher Emmanuel Swedenborg. Proponents including Elizabeth Barrett Browning believed that the living could communicate with the dead. Conan Doyles's' spiritualist writings include The Wanderings of a Spiritualist (1921), The History of Spiritualism (1926), and Pheneas Speaks: Direct Spirit Communications in the Family Circle (1927). One of his last works, The Case Book of Sherlock Holmes was published in 1927.

Sir Arthur Conan Doyle died at his home "Windlesham" in Crowborough, Sussex, on 7 July 1930. He was first buried in the rose garden of Windlesham. When "His Beloved, His Wife" Jean died in 1940 he was reinterred to rest with her, "reunited", in the Minstead churchyard of Hampshire, England. His grave memorial in part reads "Steel True, Blade Straight, Arthur Conan Doyle, Knight, Patriot, Physician, & Man of Letters."

"Black Peter" vs The Sea Wolf

Any thoughts on whether Jack London may have gotten his inspiration for The Sea Wolf (1904) from Doyle's Sherlock Holmes story, "The Adventure of Black Peter" (1902 - 1903)? I see a number of key parallels: - Both title characters are sea captains - ... of seal-hunting ships - both are ruthless, - prone to fits of violent rage - Both rescue a desperate "land-lubber" in a storm and take advantage of them for their own profit...

I'm reading The Complete Collection of Sherlock Holmes and I have found that Mrs. Watson has disappeared from the book. After Sherlock is thought to be dead three years later he comes back and Watson moves back in with him??? Did I read that correctly? What did I miss?...

I've just finished the entire body of Sherlock Holmes stories (there are, what, 56 or so?) and I have a few general thoughts: For the most part, I am disappointed in how Doyle decided to address Holmes as a character. In fact, I find Watson to be a much more interesting case study. Perhaps it was the audience that he was writing for, though I suspect it has more to do with Doyle's focus on nonfiction and the factual. Very rarely is Holmes treated like a character at all - more often he is a Deus Ex Machina who develops new abilities depending on what the problems he is facing. Ash on the ground? No problem, Holmes wrote a paper on that and is an expert. Attacked? No problem, Holm...

Other Books with Sherlock Holmes

Can anyone recommend other good books with Sherlock Holmes in them? (Not the ones with a bad detective who happens to be named "Sherlock"--but with the "real" Holmes.) I've already loved: The Seven Per-Cent Solution by Nicholas Meyer Sherlock in Love by Sena Jeter Naslund The Beekeeper's Apprentice by Laurie R. King If there are any I've missed, do let me know. Thanks....

I haven't been on here in a while and i know this probaly doesn't go here, but i really need some quick help here on this short story What is the: -Setting -Conflict -Characterization -Irony -Theme -Resolution -Point of View & How did each of these have an effect on the reader & There function in the story. & a Short Plot Summary to sum up the story I know this sounds little iffy but... Reason Being: Story was very difficult for me to understand i couldn't capture these literary elements in this short story, so all help will be greatly appreciated. Thanks! -....

I'm a international student at Broad Run high school. I'm reading a book called, The White Company by Arthur Conan Doyle. I having trouble understanding the book.... I would appreciate anybody help, i really need a summary of the book. Thanks....

Hi, I am Ruth, I joined this forum because I am hoping to get some information on Arthur Conan Doyle. I understand he was born and educated in Edinburgh. Are there any recordings of his voice in existence, and if so, has anyone heard any of them? And does he have a distinguishable Scottish accent? Thanks in advance for any answers to my question. Ruth... 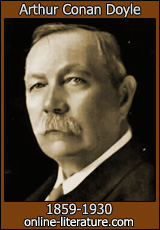 Here is where you find links to related content on this site or other sites, possibly including full books or essays about Arthur Conan Doyle written by other authors featured on this site.