Consisting of over ninety short stories, novellas, and novels, they are grouped under the following headings;

After much editing and revision, La Comédie Humaine now forms a cohesive overview of French Parisian and Provincial society during the Restoration and July Monarchy. The country is provincial; it becomes ridiculous when it tries to ape Paris. Critically writing of the Napoleonic empire and French Revolution, the new bourgeois monarch Louis Philippe frames the context for his major works. He explores themes of man and his place in society and the influences of his environment, politics, love, and wealth. He also discusses art, literature, and metaphysics. Though not for a lack of imagination, a number of characters recur in his novels including Eugène Rastigniac and Henri de Marsay.

While Balzac also had ambitions for life in the theatre and politics, he is best known for ranking highly with fellow French realist Gustave Flaubert as a major contributor to the movement. He was a friend of Alexandre Dumas and influenced Emile Zola, Marcel Proust, and Guy de Maupassant. He was inspired by Johann Wolfgang von Goethe and Dante Alighieris The Divine Comedy, and studied the works of and was friends with Sir Walter Scott, who said that Balzacs writing was observation and imagination, a difficult balance he seemed to have mastered. Some of his historical novels are similar to the Gothic romances of Ann Radcliffes. His works have inspired numerous adaptations to the stage and film and are still widely read and studied.

Born in 1799 on Saint Honorés day, 20 May, in Tours, France, Balzac would only later add the French particle de to his name though it is not clear why. He was the son of Anne Charlotte Laure Sallambier and Bernard François Balssa (d.1829) who among many other positions worked as secretary to the Kings Council.

Balzacs early years were spent away from home before he entered grammar school in Tours. He then attended the Collège de Vendôme before moving to Paris in 1816 to study law at the Sorbonne. Upon matriculation he worked as a notarys clerk, but, against his fathers wishes he turned to a career in writing.

It would be curious to know what leads a man to become a stationer rather than a baker, when he is no longer compelled, as among the Egyptians, to succeed to his fathers craft. Les Deux Freres

As a journalist, Balzac wrote essays on various topics including politics which garnered much of his attention, while working on his short stories and novels. Extremely poor and living in a garret in Paris, he published under pseudonyms including `Lord R'hoone, an anagram of Honoré. A nocturnal writer drinking copious amounts of coffee, he also tried his hand at dramas including Paméla Giraud. While relations were somewhat strained with the rest of his family he maintained a correspondence with his sister Laure, later known as Madame Surville. He also dabbled in numerous business ventures as publisher and printer, though they failed and saddled him with debts for years to come.

Like Charles Dickens, many of his works were first serialized in such publications as the Paris Revue and La Presse. His first full-length work follows the French Peasants who revolted against the Revolutionary government, Les Chouans (1829, The Chouans). In Physiologie du Marriage (1829, The Physiology of Marriage) he writes of women; To believe in their virtue is a kind of social religion; because they are the worlds ornament and the glory of France.

For pain is perhaps but a violent pleasure? Who could determine the point where pleasure becomes pain, where pain is still a pleasure? Is not the utmost brightness of the ideal world soothing to us, while the lightest shadows of the physical world annoy?

Balzac's autobiographical and philosophical Louis Lambert (1832) was followed by his masterpieces Eugénie Grandet (1833) and La Recherche de labsolu (1834, The Research of the Absolute). An adaptation of William Shakespeares King Lear, Le Père Goriot (Old Father Goriot) was published in 1835. Of the many titles to follow were the Swedenborgian Séraphita (1835) Science is the language of the temporal world; love is that of the spiritual world., Le Lys dans La vallée (1836, The Lily in the Valley), L'Enfant maudit (1836, The Hated Son), La Vieille Fille (1836, The Old Maid), Les Illusions perdues (1837, Lost Illusions), César Birotteau (1837), and Une Fille d'Éve (1838, A Daughter of Eve) A man is a poor creature compared to a woman.. In Mémoires de Deux Jeunes Mariées (1842, Letters of Two Brides) he writes; The art of motherhood involves much silent, unobtrusive self-denial, an hourly devotion which finds no detail too minute.

Albert Savarus (1842) was followed by La Rabouilleuse (1842, The Black Sheep) which again explores the world of wealth and corruption in 19th century France. In Catherine de Medici expliquée, Souverain (1843) Balzac writes When Religion and Royalty are swept away, the people will attack the great, and after the great, they will fall upon the rich. Modeste Mignon and Béatrix were published in 1844, Un Homme d'affaires (A Man of Business) in 1845. La Cousine Bette (1847, Cousin Bette), loosely based on some of Balzacs own affairs was followed by Le Cousin Pons (1847). Splendeurs et misères des courtisanes (The Splendors and Miseries of Courtesans or A Harlot High and Low) was published in four parts between 1838-1847. One of Balzacs last works was Les comédiens sans le savoir (1847, The Unwitting Actors).

Balzac lived and wrote mostly at his villa in Sèvres in his later years, though he traveled often. He made the acquaintance of and has been linked to many notable women who would inspire characters in his stories including the much older Madame de Berny and the Marquise de Castries. He held a long correspondence, Lettres à l'Étrangère, with Polish Countess Evelina Hanska, and married her in 1850 in Berdychiv, Ukraine. In a famous letter to her he wrote of their love;

It is a beautiful plant growing from year to year in the heart, ever extending its palms and branches, doubling every season its glorious clusters and perfumes; and, my dear life, tell me, repeat to me always, that nothing will bruise its bark or its delicate leaves, that it will grow larger in both our hearts, loved, free, watched over, like a life within our life...

Honoré de Balzac died on 18 August, 1850, and lies buried in the Père Lachaise Cemetery in Paris, France. Long time friend Victor Hugo delivered the eulogy; Henceforth men's eyes will be turned towards the faces not of those who are the rulers but of those who are the thinkers. His grave is adorned with a bronze sculpture by Pierre Jean David Angers, and Auguste Rodin also memorialised his likeness in a bronze bust now housed at the Victoria and Albert museum in London, England.

I declare, on my soul and conscience, that the attainment of power, or of a great name in literature, seemed to me an easier victory than a success with some young, witty, and gracious lady of high degree.Raphaël in La Peau de chagrin (The Wild Asss Skin)

The Balzac Society of America: Call for Submissions

Hello everyone, We have re-founded the Balzac Society of America which went defunct in the 1960s. Hoping to keep discussion about Honoré De Balzac relevant and lively. We are putting together our first annual publication, The Balzac Bulletin. If anyone has articles they would be interested in submitting to our inaugural publication we'd love to see them. We're taking a broad approach so we're looking for Scholarly Articles, Art Work, more personal essays and new literary work in the Balzacian vein. The call for submissions can be found here: https://www.balzacsociety.com/publications/ If any one has any interest please contact us via the Balzac society. I'd be great to ...

In spite of being one of the great French realists, Balzac seems to have been little discussed of late. Here is a link to his Droll Stories and an invitation to read them and discuss them. http://www.fullbooks.com/Droll-Stories-Complete1.html...

Hi Everyone! I need a little help. I am working on an essay on Stendhal's 'The Chartreuse of Parma'. I need the review that Balzac did of the novel in 1840. It is a fairly old article, so I guessed it would be easily available online, but I could not find it anywhere. Could any of you please point me to a link where that review can be found? Thanks......

Wow, just reading in the intro of his Old Goriot of this mans incredible output: Of these proposed three to four thousand characters Balzac succeeded in creating some two thousand, in twenty-two years of intensive work at relentlessly high pressure, working fourteen, sixteen, eighteen hours a day for months on end, choosing the night to work in, when he would be free from interruption, and stimulating his tired brain with cups of strong black coffee. In those years, apart from numerous essays, short stories and plays, he wrote nearly ninety volumes, of which almost every one is a novel of the first rank. Obviously a really dedicated and obsessed individual, I'm r...

I wonder if Gesammelte Werke wrote a book with the above title? What is the siginificance of JUNGGESELLENWIRTSCHAFT?...

The best works of Balzac.

As I noticed Balzac isn't popular author here... That's a pity, because for me he's one of the finest classical writers and besides he influenced many others like Proust, Zola, Flaubert or James. I've started reading his novels recently and till now I've read: Eugenia Glandet, Pere Goriot, Lost Illusions, The Splendors and Miseries of Courtesans. My favourite now is Lost Illusion and Lucien Chardon is one of my favourite characters in literature. Do you like Balzac's style of writing? And which of his works do you like the best?...

Balzac and the Mob

I have been re-reading Old Goriot and noticed something Vautrin said to Rastignac when he was trying to lead him astray - At this crisis, I am going to make you an offer which no man would refuse" - sound familiar to anyone?...

This is a great story of vanity's illusions that are never really lost. Only the characters who love the egoist become disillusioned. In the process, they gain freedom and modest prosperity....

Does this Balzac novel really exist?

I recently read in an article by Michel Butor that a group of 3 novels constitute the "spinal column" of Balzac's Comedie Humaine: Lost Illusions (Illusions Perdues), A Harlot High and Low (Splendeurs et Miseres des Courtisanes) and The Last Incarnation of Vautrin (La Derniere Incarnationde Vautrin). The last mentioned novel doesn't seem to exist, at least not on any listing I can find of Balzac's works! There is a chapter of only around 4 pages late in A Harlot High and Low called "Last Incarnation", but otherwise I find no trace of a novel by such a name. Can anyone solve this mystery for me?... 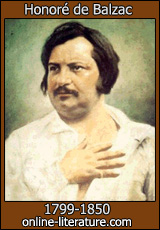 Here is where you find links to related content on this site or other sites, possibly including full books or essays about Honore de Balzac written by other authors featured on this site.