Johann Wolfgang von Goethe (1749-1832), German poet, playwright, novelist, and natural philosopher is best known for his two-part poetic drama Faust, (1808-1832) which he started around the age of twenty three and didn't finish till shortly before his death sixty years later. He is considered one of the greatest contributors of the German Romantic period.

Goethe's early years of education were inconsistent; informally from his father and then with tutors. However, he managed a grasp of Greek, Latin, French, and Italian by the age of eight, and his mother taught him well in the art of story-telling. At the age of sixteen, in 1765, Goethe went to Leipzig University to study law as his father wished, though he also gained much recognition from the Rococo poems and lyric he wrote during this period. In 1766 he fell in love with Anne Catharina Schoenkopf (1746-1810) and wrote his joyfully exuberant collection of poems Annette.

In 1768 Goethe wrote his Leipzig Songbook (1768)--ten poems to melodies composed by Bernhard Theodor Breitkopf--while he was convalescing from a severe lung infection. Nurse Susanne Katharina von Klettenberg, a relative of his mother's, introduced him to protestant piety and pansophic-alchemistic works in the neo-platonic tradition.

In 1770 Goethe continued his law studies in Strasbourg as well as attending lectures in history, political science, anatomy, surgery, and chemistry. He met daily with philosopher, poet, and theologian Johann Gottfried Herder (1744-1803) avant-gardist of the Sturm und Drang movement. Sesenheimer (1770-1771) was published, followed by Neue Lieder in Melodien gesetzt von B.T.Breitkopf (1770), Goethe's first printed anthology of poems. Goethe earned his degree and was promoted to licentitatus juris in 1771. He returned to Frankfurt where he began to practice law, though he was much more absorbed with writing Götz von Berlichingen (1773), a story of a 16th century robber baron, representing Goethe's youthful protest against the established order and his desire for intellectual freedom. It would become his first dramatic success.

Goethe's The Sorrows of Young Werther (1774) a novel written in monologue, inspired by his unrequited love for Charlotte Buff, the fiancé of a friend, became a worldwide success for him at the age of 25. It attained cult status and is a good example of the Sturm und Drang literary movement's intense respect for human emotion. Goethe received many admirers from Europe's nobility, Princes Karl August and Konstantin von Sachsen-Weimar among them. In 1775 Goethe's engagement with Lili Schönemann (1758-1817) dissolved. That same year he was invited to the court of Duke Karl August at Weimar, where he remained for the majority of the rest of his life producing melodramas, operettas, and plays including Erwin und Elmire. Ein Schauspiel mit Gesang, for entertaining the court.

In 1776 Goethe was granted Weimar citizenship and appointed Geheimer Legationsrat with a seat and vote in the state's highest office, thus with a secured income. In 1777 Goethe's sister Cornelia died. After being appointed Head of the Commission for War and Road Construction he took a second trip to Switzerland in the company of Duke Karl August. Goethe wrote his first version of Iphigenie, a play published later in 1787 as Ipigenie auf Tauris which is based on Greek mythology.

In 1781 Goethe was conducting mineralogical studies and lectures about human anatomy at the Liberal School of Drawing in Weimar. A year later he was conferred a title of nobility, "von Goethe", by Emperor Joseph II. Around this time he moved to a house at the "Frauenplan" in Weimar which remained his home until his demise. As part of his on-going studies in anatomy, in the year 1784, Goethe discovered the human intermaxillary bone.

In 1786, he travelled to Italy and was impressed by Greek and Roman sculpture, architecture, and literature. There he met Christiane Vulpius (17651816), beautiful yet with little education, who became his wife and the mother of his children. Though she did not accompany him into society, they finally married in 1806.

In 1787 Goethe was busy pursuing geological and botanical studies in Naples and Sicily and climbed Mount Vesuvius; but he continued to write and next penned his first version of Faust. His journey to Venice in 1790 was where he wrote Venetianischen Epigramme and his play Torquato Tasso about the Italian poet Torquato Tasso (1544-95).

Goethe's aesthetic theory was partially influenced by his friend Friedrich von Schiller (1759-1805), of whose journal Die Horen (1795-1797) he contributed articles to. During a congress of monarchs in Erfurt in 1808, Goethe met with Napoleon Bonaparte, an avid reader of his works. Faust Part I was published in 1808, Goethe's masterpiece of the courtly-mannered persona of Mephistopheles striking a deal with God (based on the same legend as Christopher Marlowe's Dr. Faustus).

In 1831 Goethe brought Faust to an end, sealing the manuscript and ordering it to be published only after his death. Fully expecting to recover from yet another fever and infection, Goethe died unexpectedly on 22 March 1832 in Weimar; it is said his last words were a request to a servant to open another shutter to let in more light, whilst Goethe traced letters in the air.

Johann Wolfgang von Goethe now rests in the Fürstengruft or "Royal Tomb" in the Historischer Friedhof "Historic Cemetery" in Wiemar where his dear friend Schiller is also laid to rest. In honour of these two famous German men of letters, a statue of Goethe and Schiller now stands at the German National Theatre in Munich. UNESCO'S "Memory of the World" list includes the handwritten works of Goethe preserved by the Goethe-Schiller-Archive.

I haven't read much of Goethe but I recently came upon a quote that doesn't seem like Goethe at all: "Why look for conspiracy when stupidity can explain so much?" There are plenty of web references attributing it to Goethe but I suppose they can all be traced back to an original poster that quotes it with the words "if I'm not mistaken". There is just one more reference attributing the quote to Lonnie Beckham, which seems much more reasonable to me. Is there anybody who could confirm that it's not a quote that can be attributed to Goethe?...

Hi Everybody, does anybody know, which is the original German title of this poem from Goethe. I've been looking for it for a month now, but still nothing. HASTE NOT, REST NOT Without haste! Without rest! Bind the motto to thy breast; Bear it with thee as a spell; Storm or sunshine, guard it well! Heed not the flowers that round thee bloom, Bear it onward to the tomb. Haste not! Let no thoughtless deed Mar for aye the spirit's speed! Ponder well and know the right, Onward, then, with all thy might! Haste not! Years can ne'er atone For one reckless action done. Rest not! Life is sweeping by, Go and dare before you die Something mighty and sublime Leave behind to con...

Hey, Can you help me by citing what should I focus on, read before-hand when reading East West Divan? Because I am asked by my professor to compare between Goethe's East West Divan and Yeat's A Gift of Haroun Al-Rashid....

Can "so divinely is the world organized that every one of us, in our place and time, is in balance with everything else" be accredited to Goethe? Someone said "it is the philosophy of Leibnitz who was lampooned by Voltaire in Candide--'everything for the best in the best of all possible worlds' "....

An interesting element in the Conversations is Goethe's advice to his young friend who was interested in poetry. I assume his advice is also applicable today to young writers as it was some 150 years ago. Thus he y-urges Eckermann to found his poems on actual experiences and to seek inspiration in realities -- not in large and vague reflections. "I attach no value to poems snatched out of the air," says he. Apprehend the individual is his counsel: "While you content yourself with generalities everyone can imitate you; but in the particular no one can -- and why? because no others have experienced exactly the same thing." Such a practical suggestion, as well as critica...

Does anybody know if the Matthew Lewis translation of Faust I is in print? Or if it even exists today? Its just that i am doing an essay on Byron and i'd like to read the same translation he heard. Any help would be very much appreciated!...

Goethe is one of my most loved writers. Maybe just because I like to think widely taking in process all delibereted subjects and ideas. His Faust is incredible. Putting on the stage all questions of Creation Goethe solves them in a very striking way. This work of him is one of my most favourite. Would like to know what you think about it. Or maybe, it would be better if we study it, eh? I mean, what if I place here some excerpts of Faust and we could think together about them? And surely you can say what you think about the work on the whole. So, tell me what is better to do? ps...have you ever heard that there was one hero besides Faust and Mefistofel in "Faust"? It called "Der Kolo...

How widely read is he?

There was a time when Goethe was widely read, both in the German-speaking lands and also much further afield, too. For quite a long time (c. 1775- 1850 or longer) he was even a 'cult-figure' for many. He probably did more than anyone else to put German literature on the international map, so to speak. Has Goethe simply sunk to the status of a 'great name' in World Literature that nobody reads any more? It occurs to me that it may be of some significance that this seems to be the very first post on him. I'd be interested to hear if people have read any of his works and if so, what?... 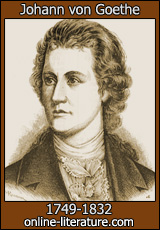 Here is where you find links to related content on this site or other sites, possibly including full books or essays about Johann Wolfgang von Goethe written by other authors featured on this site.