Gustave Flaubert (1821-1880), French novelist of the realist period, is known best for his sensational Madame Bovary (1857), a classic tale of romance and retribution. It is a portrait of the young provincial Emma Bovary as fallen woman and her adulterous liaisons with Rodolphe Boulanger. (It was criticised then banned for a period after its first release).

Gustave Flaubert was born in Rouen, France on 12 December 1821, the fifth of six children in a family of doctors. His father, Achille-Cléophas Flaubert, was chief surgeon in Rouen. (He died in 1846). Flaubert's mother, Anne Justine Caroline (née Fleuriot), was the daughter of a physician, and was to become one of the most influential people in his life and works. (She died in 1872).

In the 1830s Flaubert attended the Collége Royal de Rouen, writing for its newspaper, reading Shakespeare, travelling extensively and at the age of fourteen began in earnest his own writings, inspired by his unconsummated love affair at this time with the much older and married Elisa Schlésinger.

After unsuccessfully studying law in Paris in the early 1840s, the perfectionist in Flaubert (one of his maxims being: "Be regular and orderly in your life like a bourgeois, so that you may be violent and original in your work.) begins a brisk period of further Correspondence (1926-1933) with various family and friends, including Emile Zola and Georges Sand. He once wrote to Sand The age of politics is over and thus he began developing his philosophy of rejection of The State and Neo-Catholic political and social views of his time. His spare yet exacting style of scrupulous use of le mot juste became one of his hallmarks.

After the death of his father Flaubert lived in Rouen for the rest of his life. His malady of nervous fits (which may have been epilepsy that started when he was around twenty-two years of age) caused him to be sequestered at home much of the time for treatments of it, while allowing him the peace to continue his writings, including the mock-epic Sentimental Education (1870) and The Temptation of St. Anthony (1874), set in the 4th century. In 1848 the twenty-six year old Flaubert went to Paris with his good friend Louis Bouilhet to witness the Revolution.

Flaubert embarked on a trip to Egypt and the Far East with fellow writer Maxime Du Camp in 1851, sending home a varied assortment of exotic souvenirs. Nearly thirty years old now he then took the next five years to write Madame Bovary, working mostly at night, having it published in six instalments by Du Camps literary journal Revue de Paris. The ensuing moral outrage in 1857 caused him to be (unsuccessfully) prosecuted on moral grounds.

This tumultuous period was followed in the 1860s with his continued association with Napoleon III and his court and progress in writing especially with the publication of Salammbô in 1863, about ancient Carthage. Flaubert begins his final revision for Sentimental Education, his time spent at school in Paris the inspiration for it.

In 1870 Flaubert became very sick, but continued to write after attaining Chevalier, Legion of Honour, though ironically he resisted ennobling human nature in his writings. Anne Justine Caroline Flaubert, his mother, died in 1872, the one woman to provide constancy and comfort to Gustave.

Afflicted by syphilis and rapidly declining health, two weeks before his death, he told his niece Caroline, "Sometimes I think I'm liquefying like an old Camembert." Three Tails (1877) contains A Simple Heart, his tribute to Georges Sand, Saint Julien and Herodias. On 8 May, 1880, Flaubert suddenly died from brain hemorrhage.

He is buried at Rouen Cemetery in Normandy, France alongside another literary giant Marcel Duchamp. His unfinished Bouvard et Pécuchet was published in 1880, followed by his Correspondence in 1923, containing the letters and forever immortalizing the tumultuous love affair between himself and Louise Colet.

...is one of the few Books I saved from the Black Pearl before I got marooned on this Island. These Days I try to copy their Garden-Statues with Coconuts. Wonderful clowns, love 'em 'til the end of Time....

Can anyone suggest a good dissertation topic on Flaubert?...

Our teacher asked us to make a comparison between two characters : Madam Bovary as a character and Santiago in Ernest Hemingway's novel "Old Man and the Sea" . please any idea!...

I am looking for a quote from one of his letters " After 30 a man finds sadness in the beauty of a woman, he sees a corpse walking around" or something like that? I loved the quote but obviously don't remember it well thanks ps. madame bovary was phenomenal, but don't know what else of his should be read next....

Does anyone know the date Madam Bovary was first published in English? e...

Do you think Gustave Flaubert made a good choice by deciding that Emma Bovary must die?...

The great man seems to be a little overlooked on this site! There aren't any of his books there! It's surprising considering how influential his works have been. It would be nice to have Madame Bovary or Sentimental Education online for the appreciation of the site's readerhood. If anyone else agrees, that would be....nice.... 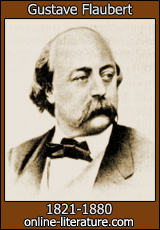 Here is where you find links to related content on this site or other sites, possibly including full books or essays about Gustave Flaubert written by other authors featured on this site.