Victor Appleton [pseudonym] for Howard R. Garis (1873-1962), American author best known for his Uncle Wiggly series featuring the gentleman rabbit with floppy ears in top coat and hat. He also penned the majority of the Tom Swift stories under his pseudonym "Victor Appleton".

Howard Roger Garis was born on 25 April 1873 in Binghamton, New York. His parents were Simeon Harris Garis, an employee with the railroad, and Ellen A. Kimball. Due to his father's occupation, the family lived in various parts of New York State, until young Howard obtained a job with the Erie Lackawanna Railroad at the age of sixteen in Newark, New Jersey.

To while away the time between the mundane tasks of the baggage department, Garis put pen to paper and started to write poems and short stories, and outlines and ideas for others. After the death of his father, he secured a job as reporter with the Newark Evening News. It was there that he met journalist and first female reporter for the state, Lilian McNamara. They married in 1900 and would have two children. His daytime reporting job didn't pay very well but Garis was confident in his imaginative and creative abilities to create fiction, which he worked on in the evenings. Though they were long days, writing came easy to him, he didn't consider it "work". His first published novel's failure was not encouraging, With Force and Arms: A Tale of Love and Salem Witchcraft (1902). It was followed by Isle of Black Fire and The White Crystals in 1904, which were successful in reaching a younger audience hungry for adventurous tales and received favourable reviews.

Professor Jonkin's Cannibal Plant (1905) was the first in his series that were published in the Argosy. Though the first story was a success, the ensuing ones never made it to reprinting. He wrote them quickly and sold them all to the paper; Garis had moved on to another plot. Around this time he became acquainted with Edward Stratemeyer, of the newly-founded Stratemeyer Syndicate. He had enjoyed Garis' efforts at fiction, his light-hearted humour and creativity in his characters' various adventures. They worked out a deal where Garis would write under the pseudonym "Clarence Young" the Motor Boys juvenile series. He retained his position with the Newark and at night earned $100 a book, which usually took him about two weeks to produce. His wife Lilian eventually joined the Syndicate ghostwriting team as "Margaret Penrose" penning the very popular Motor Girls series.

Stratemeyer established the winning formula for his books of conflict, suspense, climax and resolution. He supplied the plot outline and directions as to the layout of the book. He pitched his Tom Swift character idea to Garis; courageous boy-wonder on top of all the latest technological gadgets and maker of fantastical inventions. He was fully confident that Garis could take on the project and the first in the series, Tom Swift and His Motor Cycle: Fun and Adventure on the Road was published in 1910.

The idea for the Uncle Wiggily series arose with the suggestion of the owner and publisher of the Newark Evening News. The charming rabbit started to appear in its pages in 1910, with a compilation of the stories released in Uncle Wiggily's Adventures (1912). Other of the numerous titles to follow under Garis' own name were Larry Dexter and the Bank Mystery (1912), Camp Fire Girls on the Ice (1913), The Curlytops at Uncle Frank's Ranch (1918), Rick and Ruddy; the Story of a Boy and His Dog (1920), Rick and Ruddy on the Trail (1924), and Buddy and His Winter Fun (1929).

For the next fifteen years Lilian and Howard churned books out, usually working six days a week, though Howard still worked at the Newark until 1947. They moved to Amherst, Massachusetts to be near their son Roger in 1950. Lilian Garis died on 14 April 1954 after a long spell of poor health. Howard R. Garis, beloved "Uncle Wiggly" died in Amherst, Massachusetts on 5 November 1962. He left a legacy behind of thousands of stories and hundreds of books that have endured the test of time in their charm and entertainment for children all over the world.

Victor Appleton is the pseudonym for Howard Garis, affectionately know as "Uncle Wiggly" (after his top-hat wearing rabbit character of same name). Garis met his wife Lilian (nee McNamara) at the Newark Evening News where they were both journalists. The pair ended up writing hundreds of books for the Stratemeyer Syndicate and became a major force behind the publisher, with countless series in the juvenile fiction genre including Tom Swift, Dick Hamilton, Bobbsey Twins, and The Moving Picture Boys. The Garis's often worked 6 days a week and were married for over 50 years. Wow! They remind me of the poets Elizabeth Barrett Browning and Robert Browning who also seemed to live long and happy liv... 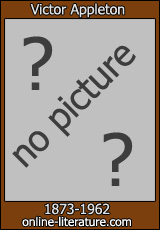 Here is where you find links to related content on this site or other sites, possibly including full books or essays about Victor Appleton written by other authors featured on this site.