Literature Network » Stephen Leacock » Literary Lapses » A, B, and C

THE HUMAN ELEMENT IN MATHEMATICS

The student of arithmetic who has mastered the first four
rules of his art, and successfully striven with money
sums and fractions, finds himself confronted by an unbroken
expanse of questions known as problems. These are short
stories of adventure and industry with the end omitted,
and though betraying a strong family resemblance, are
not without a certain element of romance.

The characters in the plot of a problem are three people
called A, B, and C. The form of the question is generally
of this sort:

Or after this wise:

"A lays a wager that he can walk faster than B or C. A
can walk half as fast again as B, and C is only an
indifferent walker. Find how far, and so forth."

The occupations of A, B, and C are many and varied. In
the older arithmetics they contented themselves with
doing "a certain piece of work." This statement of the
case however, was found too sly and mysterious, or possibly
lacking in romantic charm. It became the fashion to define
the job more clearly and to set them at walking matches,
ditch-digging, regattas, and piling cord wood. At times,
they became commercial and entered into partnership,
having with their old mystery a "certain" capital. Above
all they revel in motion. When they tire of
walking-matches--A rides on horseback, or borrows a
bicycle and competes with his weaker-minded associates
on foot. Now they race on locomotives; now they row; or
again they become historical and engage stage-coaches;
or at times they are aquatic and swim. If their occupation
is actual work they prefer to pump water into cisterns,
two of which leak through holes in the bottom and one of
which is water-tight. A, of course, has the good one; he
also takes the bicycle, and the best locomotive, and the
right of swimming with the current. Whatever they do they
put money on it, being all three sports. A always wins.

In the early chapters of the arithmetic, their identity
is concealed under the names John, William, and Henry,
and they wrangle over the division of marbles. In algebra
they are often called X, Y, Z. But these are only their
Christian names, and they are really the same people.

Now to one who has followed the history of these men
through countless pages of problems, watched them in
their leisure hours dallying with cord wood, and seen
their panting sides heave in the full frenzy of filling
a cistern with a leak in it, they become something more
than mere symbols. They appear as creatures of flesh and
blood, living men with their own passions, ambitions,
and aspirations like the rest of us. Let us view them in
turn. A is a full-blooded blustering fellow, of energetic
temperament, hot-headed and strong-willed. It is he who
proposes everything, challenges B to work, makes the
bets, and bends the others to his will. He is a man of
great physical strength and phenomenal endurance. He has
been known to walk forty-eight hours at a stretch, and
to pump ninety-six. His life is arduous and full of peril.
A mistake in the working of a sum may keep him digging
a fortnight without sleep. A repeating decimal in the
answer might kill him.

B is a quiet, easy-going fellow, afraid of A and bullied
by him, but very gentle and brotherly to little C, the
weakling. He is quite in A's power, having lost all his
money in bets.

Poor C is an undersized, frail man, with a plaintive
face. Constant walking, digging, and pumping has broken
his health and ruined his nervous system. His joyless
life has driven him to drink and smoke more than is good
for him, and his hand often shakes as he digs ditches.
He has not the strength to work as the others can, in
fact, as Hamlin Smith has said, "A can do more work in
one hour than C in four."

The first time that ever I saw these men was one evening
after a regatta. They had all been rowing in it, and it
had transpired that A could row as much in one hour as
B in two, or C in four. B and C had come in dead fagged
and C was coughing badly. "Never mind, old fellow," I
heard B say, "I'll fix you up on the sofa and get you
some hot tea." Just then A came blustering in and shouted,
"I say, you fellows, Hamlin Smith has shown me three
cisterns in his garden and he says we can pump them until
to-morrow night. I bet I can beat you both. Come on. You
can pump in your rowing things, you know. Your cistern
leaks a little, I think, C." I heard B growl that it was
a dirty shame and that C was used up now, but they went,
and presently I could tell from the sound of the water
that A was pumping four times as fast as C.

For years after that I used to see them constantly about
town and always busy. I never heard of any of them eating
or sleeping. Then owing to a long absence from home, I
lost sight of them. On my return I was surprised to no
longer find A, B, and C at their accustomed tasks; on
inquiry I heard that work in this line was now done by
N, M, and O, and that some people were employing for
algebraica jobs four foreigners called Alpha, Beta, Gamma,
and Delta.

Now it chanced one day that I stumbled upon old D, in the little
garden in front of his cottage, hoeing in the sun. D is an aged
labouring man who used occasionally to be called in to help A,
B, and C. "Did I know 'em, sir?" he answered, "why, I knowed 'em
ever since they was little fellows in brackets. Master A, he
were a fine lad, sir, though I always said, give me Master B for
kind-heartedness-like. Many's the job as we've been on together,
sir, though I never did no racing nor aught of that, but just
the plain labour, as you might say. I'm getting a bit too old
and stiff for it nowadays, sir--just scratch about in the
garden here and grow a bit of a logarithm, or raise a common
denominator or two. But Mr. Euclid he use me still for them
propositions, he do."

From the garrulous old man I learned the melancholy end of
my former acquaintances. Soon after I left town, he told
me, C had been taken ill. It seems that A and B had been
rowing on the river for a wager, and C had been running
on the bank and then sat in a draught. Of course the bank
had refused the draught and C was taken ill. A and B came
home and found C lying helpless in bed. A shook him
roughly and said, "Get up, C, we're going to pile wood."
C looked so worn and pitiful that B said, "Look here, A,
I won't stand this, he isn't fit to pile wood to-night."
C smiled feebly and said, "Perhaps I might pile a little
if I sat up in bed." Then B, thoroughly alarmed, said,
"See here, A, I'm going to fetch a doctor; he's dying."
A flared up and answered, "You've no money to fetch a
doctor." "I'll reduce him to his lowest terms," B said
firmly, "that'll fetch him." C's life might even then
have been saved but they made a mistake about the medicine.
It stood at the head of the bed on a bracket, and the
nurse accidentally removed it from the bracket without
changing the sign. After the fatal blunder C seems to
have sunk rapidly. On the evening of the next day, as
the shadows deepened in the little room, it was clear to
all that the end was near. I think that even A was affected
at the last as he stood with bowed head, aimlessly offering
to bet with the doctor on C's laboured breathing. "A,"
whispered C, "I think I'm going fast." "How fast do you
think you'll go, old man?" murmured A. "I don't know,"
said C, "but I'm going at any rate."--The end came soon
after that. C rallied for a moment and asked for a certain
piece of work that he had left downstairs. A put it in
his arms and he expired. As his soul sped heavenward A
watched its flight with melancholy admiration. B burst
into a passionate flood of tears and sobbed, "Put away
his little cistern and the rowing clothes he used to
wear, I feel as if I could hardly ever dig again."--The
funeral was plain and unostentatious. It differed in
nothing from the ordinary, except that out of deference
to sporting men and mathematicians, A engaged two hearses.
Both vehicles started at the same time, B driving the
one which bore the sable parallelopiped containing the
last remains of his ill-fated friend. A on the box of
the empty hearse generously consented to a handicap of
a hundred yards, but arrived first at the cemetery by
driving four times as fast as B. (Find the distance to
the cemetery.) As the sarcophagus was lowered, the grave
was surrounded by the broken figures of the first book
of Euclid.--It was noticed that after the death of C, A
became a changed man. He lost interest in racing with B,
and dug but languidly. He finally gave up his work and
settled down to live on the interest of his bets.--B
never recovered from the shock of C's death; his grief
preyed upon his intellect and it became deranged. He grew
moody and spoke only in monosyllables. His disease became
rapidly aggravated, and he presently spoke only in words
whose spelling was regular and which presented no difficulty
to the beginner. Realizing his precarious condition he
voluntarily submitted to be incarcerated in an asylum,
where he abjured mathematics and devoted himself to
writing the History of the Swiss Family Robinson in words
of one syllable.

Literature Network » Stephen Leacock » Literary Lapses » A, B, and C 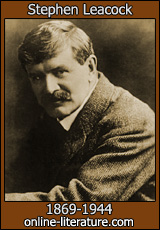