Though he published some of his earlier books under the pseudonym 'Anthony Partridge', Oppenheim soon became a well-known writer of short stories and many novels, some of which he also skilfully illustrated. There are parables of everyday life to be found in some; international espionage and intrigue in others. Well-dressed hedonists clash with Puritans in lush settings while libertine Playboys and world weary businessman lead lives of romance and adventure in the underworld. His heroes are sophisticated gastronomes, his spies always up for a challenge, and the noblemen always dashing in the Rogue tradition.

Edward Phillips Oppenheim was born on 22 October 1866, in London, England. His father Edward John Oppenheim was a leather merchant, his mother Henrietta Susannah Temperley Budd. `Oppy' as he was called when young attended the Wyggeston grammar school in Leicester. When he was sixteen years old he left school to assist his father in his leather business, which he stayed in for more than twenty years. When his father died, Oppenheim began to extricate himself from the business to concentrate on his writing. His home was The Cedars, Main Street in Evington, Leicestershire, England, from 1897 to 1905. His first novel was about England and Canada Expiation (1887); Monk of Cruta (1894), Mysterious Mr Sabin (1898), A Millionaire of Yesterday (1900), The Yellow Crayon (1903), The Malefactor (1906), Jeanne Of The Marshes (1909), The Illustrious Prince (1910), Havoc (1911), and The Tempting of Tavernake (1912) followed.

Oppenheim travelled in England and the continent on business, and he went to the United States in 1892 where he met his future wife Elsie Clara Hopkins of Easthampton, Massachusetts, with whom he'd have one daughter, Josephine. They settled in the Leicester area and it was a happy marriage for many years, despite allegations that Oppenheim allegedly had various affairs with other women. In 1905 the family moved to rural Sheringham in the very northern reaches of Norfolk county. A year later Oppenheim had already published over thirty books, his move to the country and life as a country squire bringing on a prolific period of writing.

In 1914 when World War I broke out, Oppenheim was appointed to the Ministry of Information in London, for which he would travel with journalists to the front in France. After the war the Oppenheims moved back down south to live in London, then Devon and Surrey counties, then on to Norfolk where they bought Reepham house. But they wouldn't stay long as memories of the glamorous Côte d'Azur were calling Oppenheim back to France. His increasing income from book sales helped them to make the decision. Some of his next titles to be released were The Vanished Messenger (1914), Mr Grex of Monte Carlo (1915), The Kingdom of the Blind (1917), The Zeppelin's Passenger (1918), The Great Impersonation (1920) which sold over a million copies, The Devil's Paw (1920), and The Evil Shepherd (1922).

They sold their home and purchased the Villa `Deveron', at Cagnes-sur-Mer between Cannes and Nice, where Oppenheim could play golf, gamble, and indulge in a favourite past time, sailing Echo I. He continued to produce short stories and novels which he would dictate to his secretary, the majority of which he sold to American magazine publishers in advance of book sales. Time magazine featured Oppenheim on its cover for the 12 September, 1927 issue.

To avoid the death duties in France they sold their Villa and in 1934 the Oppenheim's bought a home called `Le Vauquiédor' in Guernsey in the Channel Islands and divided their time between there and the Riviera. In 1938 they purchased a home near Grasse on the Riviera. When France collapsed the next year, they were temporarily trapped, but eventually escaped via Spain and Portugal and returned to England in 1941. They were officially `home' when in 1945, despite their frail health, they hired a yacht to travel on to Guernsey and through some complications finally repossessed their home on the island. Envoy Extraordinary was published in 1937, and Oppenheim's autobiography The Pool of Memory was published in 1941.

After years of prostate problems, E. Phillips Oppenheim died on 3 February 1946 in St. Peter Port, Guernsey, Channel Islands. Robert Standish wrote a biography of Oppenheim, Prince of Storytellers: The Life of E. Phillips Oppenheim (1957). Oppenheim left behind several screen adaptations and many of his stories have been made into movies.

Keen to learn anything about E Phillips OPPENHEIM and his pre second world war writing. In particular I want to know about his time spent in Leicestershire. Which novel did he write at the time he lived in Woodhouse Eaves ? (referred to in his autobiography). What was his connection with the Gimson (arts & crafts) family who he visited often and who were living nearby at Stoneywell Ulverscroft?...

Oh dear! Am I the only 'admirer' of Oppenheim? He is hopelessly dated and snobbish - but entertaining! Does anyone still read his stuff now? I have 32 books from his output of about 150.... 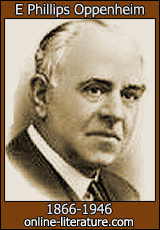 Here is where you find links to related content on this site or other sites, possibly including full books or essays about E. Phillips Oppenheim written by other authors featured on this site.