Émile Zola (1840-1902), French activist, critic, and author of many works influential in the naturalism literary school including his series of twenty novels written between 1871 and 1893 that follow the Rougon Macquart family starting with The Fortune of the Rougons (1871). From the Author's Preface;

"I wish to explain how a family, a small group of human beings, conducts itself in a given social system after blossoming forth and giving birth to ten or twenty members, who, though they may appear, at the first glance, profoundly dissimilar one from the other, are, as analysis demonstrates, most closely linked together from the point of view of affinity. Heredity, like gravity, has its laws.

By resolving the duplex question of temperament and environment, I shall endeavour to discover and follow the thread of connection which leads mathematically from one man to another. And when I have possession of every thread, and hold a complete social group in my hands, I shall show this group at work, participating in an historical period; I shall depict it in action, with all its varied energies, and I shall analyse both the will power of each member, and the general tendency of the whole."--Emile Zola, Paris, July 1, 1871

Set during the tumultuous period of the rise in power of Napoleon Bonaparte III as Emperor, to the end of the Franco Prussian war, Zola's ambitious Rougon Macquart series, inspired by Honore de Balzac's La Comédie humaine series includes La Conquête de Plassans (The Conquest of Plassans) (1874), and L’Assommoir (The Dram-Shop or The Drunkard) (1877). Another in the Rougon Macquart series, Nana (1880) represents the underclasses, a prostitute and "devourer of men". She rises among the Parisian elite as a destructive yet powerful figure who disrupts conventions and comes to represent the downfall of the Second French Empire. Zola himself descended mine shafts in his methodically intense approach to writing Germinal (1885). Set in the 1860s, it deals with the struggle of the proletariat and the inhumane working conditions of striking coal miners in Northern France. It has inspired numerous film and television adaptations, notably the 1993 version starring Gérard Depardieu. Other titles in the series are L'Oeuvre (The Masterpiece) (1886), a lightly fictionalised depiction of his friendship with painter Paul Cézanne which later caused a rift in their friendship; La Terre (1887); the psychological thriller La Bête humaine (1890), and ending with Le Docteur Pascal (1893). Initially borrowing from the romantic movement, Zola became a proponent of French naturalism along with other such notable authors of the time as Stephen Crane Maggie: A Girl of the Streets (1893), George Gissing New Grub Street (1891), and Guy de Maupassant The Maison Tellier (1881). Inspired by Claude Bernard's Introduction to Experimental Medicine (1865) Zola soon found his voice as dispassionate scientific observer of French society, human nature and moral decay, often in painstakingly sordid detail.

Émile Édouard Charles Antoine Zola was born in Paris, France, on April 2nd, 1840, the son of François Zola, an engineer, and his wife Emilie Aubert. He grew up in Aix-en-Provence, attending the (now named) Collège Mignet. Painter Paul Cézanne was a school-mate. Zola then attended the Lycée Saint Louis in Paris. Entering the harsh straits of poverty after his father died, Zola left school and worked various clerical jobs. He then moved on to writing literary columns for Cartier de Villemessant's newspapers. A sign of things to come, Zola was harsh and outspoken in his criticism of Napoleon; "..my work becomes a picture of a departed reign, of a strange period of human madness and shame." --from the Author's Preface to The Fortune of the Rougons. Zola was also harshly anti-Catholic in another quote attributed to him; "Civilization will not attain to its perfection until the last stone from the last church falls on the last priest."

One of Zola's first works published was his autobiographical La Confession de Claude (1865), which attracted many critics and brought negative attention to himself including the police. Guilt and shame haunt Thérèse Raquin (1867), another of Zola's works to inspire many film and television adaptations. Madeleine Férat was published a year later. Zola further explores the scientific model in Le Roman Experimental (The Experimental Novel) (1880). He next wrote his Les Trois Villes series consisting of Lourdes (1894), Rome (1896), and Paris (1898).

Perhaps the most sensational and certainly politically influential work of Zola's is "J'accuse" (I Accuse!) (1898), his open letter to then French president Félix Faure. Accusing the French government of anti-semitism, it was published on the front page of the Paris newspaper `L'Aurore' (The Dawn) on 13 January, 1898, in response to the Dreyfus affair, a scandal that had divided the country in two as the rest of the world watched on uneasily. Captain Alfred Dreyfus was a Jewish military officer in the French army, hastily tried and convicted of treason in 1894. Realising their error in haste and bureaucratic bungling, the government was not willing to back down and release him from imprisonment on Devil's Island until many years later. Zola's article of exposure and ensuing furore helped lead France to enact a law in 1905 that separates church and state; "The Republic neither recognizes, nor salaries, nor subsidizes any religion"."

Zola was convicted of libel and after his internationally covered trial sentenced to a year long jail term but fled to England. He returned to France when the charge against him was dismissed. Dreyfus was exonerated and regained full honours with the military. Back in France, Zola continued writing, including his Les Quatre Évangiles (Four Gospels); Fécondité (Fruitfulness) (1900), Travail (Labor) (1901), Vérité (Truth) (1903), and Justice (unfinished).

In Paris on May 31, 1870 Emile Zola and Alexandrine (Gabrielle) Meley (1893-1925) married. She had been a close companion and friend for years. Emile and Alexandrine had no children together, however, Emile had 2 children with his mistress Jeanne Rozerot (1867-1914), whom he had met in 1888. She was twenty-seven years younger than him. Emile Zola died on Tuesday September 29th, 1902, at the age of 62, at his home on the Rue de Bruxelles in Paris. He died of carbon monoxide poisoning, although some say it was under suspicious circumstances. His wife Alexandrine was successfully revived and lived many more years. His Montmartre funeral was attended by more than 50,000 people including government and military officials, including Captain Alfred Dreyfus. Emile Zola was eulogised by fellow author Anatole France. Zola was first interred at the Cimetière de Montmartre in Paris, then in 1908 moved to The Panthéon in the Latin Quarter of Paris where he now rests among fellow French literary giants including Francois-Marie Arouet Voltaire, Jean Jacques Rousseau, and Victor Hugo.

Has Zola always been adapted so much?

It seems that everywhere we look, there's a new film, play, opera or television series based on the work of Emile Zola. I'm delighted to be learning more about this masterful author, even in translation. (My French isn't there yet -- but I'm working on it.) But is the current proliferation of adaptations and reimaginings just a continued trend, is the public domain status working in our favor, or is there another factor here that I'm unaware of? Would love to hear from someone who is knowledgeable about the history of his work's popularity. Thanks!...

I've had this book for quite some time now. I picked it up at a used bookstore in Ireland seven years ago and have meant to read it, but alas, life and other books got in the way. I've decided that now isthe time to read it and I'm glad that I've made the decision. I liked the opening scene as depicted in the book. The bleak plains and the heat generated in the horizon by the coal mine and other plants around the area painted quite an interesting scene, at least, a very dark one. I don't know that much about mining, but I've read elsewhere that Zola did his homework about whatever it was that he was writing about. The importance of timbering is mentioned quite often, I also enjoyed...

Do you know "The Experimental Novel" written by Emile Zola?

Have you ever read it? I tried to find the essay through internet, but I can't... Plz help me:bawling:...

For french students, possible to read a very good bigraphy on mes-biographies.com/Ecrivain/Zola.html... 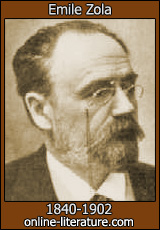 Here is where you find links to related content on this site or other sites, possibly including full books or essays about Emile Zola written by other authors featured on this site.