Thomas Bulfinch (1796-1867), American banker and author wrote Bulfinchs Mythology comprised of three volumes: The Age of Fable (1855) in which the myths of Greek and Roman Gods and Heroes Hercules, Orpheus, Pan, Zeus and many others from Ovid and Virgil are retold; The Age of Chivalry (1858) wherein Bulfinch collects the great Arthurian legends in Englands history surrounding King Arthur and his Knights of the Round Table, Richard the Lion Hearted, Robin Hood and many others; and in Legends of Charlemagne (1863) one can read about Charlemagne, his knights the Paladins, Orlando, the Orcs, Ogier the Dane and many others in their exploits in France, Germany, Africa and beyond.

Adding his own commentary, Bulfinch aimed to impart wisdom by retelling these ancient classical and mythological legends of Celtic, Greek, Oriental, Roman, and Scandinavian origin and their relation to the literary world For Mythology is the handmaid of literature; and literature is one of the best allies of virtue and promoters of happiness. (from the Authors Introduction to The Age of Fable). Bulfinch also wanted to provide entertainment to his Victorian era readers, young and old, and these popular works have been standard reference for decades since and still enjoyed today, over a century later. While Bulfinch tempered the stories, omitting excessive violence and overt sexual content, his readily accessible collections have provided a consistent narrative of and a broader understanding of the timeless stories and figures that are so intricately woven into our everyday life.

Thomas Bulfinch was born on 15 July 1796 in the New England town of Newton, Massachusetts, the sixth of the eleven children born to Hannah Apthorp (1768-1841) and Charles Bulfinch (1763-1844), public official and eminent architect of such buildings as Faneuil Hall in Boston, the Massachusetts State House, and in part, the United States Capitol in Washington, D.C. Charles twenty-five year career ended in financial ruin due to a bad investment around the time Thomas was born.

Lack of finances however did not diminish Thomas opportunities to attend the prestigious Boston Latin School and Phillips Exeter Academy before entering Harvard, graduating in 1814. His family was well-connected and he had a keen interest in the classics, amassing a large library over his lifetime. He shared the same philosophy as his father, intent to do good works for the public. He taught at the Latin School for a time before he obtained a position as clerk with the Merchants Bank of Boston in 1837, which he held until his death. While it was mundane work it gave him a stable source of income and he was able to focus on his writing in the evenings. Thomas lived a quiet life with his parents in Boston until their deaths; he then moved into a rooming house. He never married and regularly attended Kings Chapel where he read the Prayer Book which provided inspiration for his writing. He was a member of the Boston Society of Natural History of which he was secretary in the 1840s.

At the age of fifty-seven, Bulfinchs first work was published, Hebrew Lyrical History (1853) in which the Psalms are presented in the context of Jewish history. It was followed by The Age of Fable (1855) wherein, similar to Nathaniel Hawthornes Tanglewood Tales (1853) and Charles Kingsleys The Heroes (1856), Bulfinch provides a contextual introduction and explanation of the Greek and Roman myths to make those allusions intelligible which one meets every day (Ch. 1). His next collection was The Age of Chivalry (1858);

From this last source sprang Chivalry, which framed an ideal of the heroic character, combining invincible strength and valor, justice, modesty, loyalty to superiors, courtesy to equals, compassion to weakness, and devotedness to the Church; an ideal which, if never met with in real life, was acknowledged by all as the highest model for emulation. Ch. 1.

In 1863 Whether we regard him as a warrior or as a legislator, as a patron of learning or as the civilizer of a barbarous nation, he is entitled to our warmest admiration. Legends of Charlemagne was published. All three collections were issued under the title Bulfinchs Mythology, first in 1881 with dozens of issues since to great success. Although Edith Hamiltons Mythology has largely superceded them, Bulfinchs works have joined ranks with such other classic contributions to literature as John Bunyans Pilgrims Progress (1678), Rudyard Kiplings Jungle Book (1894), Daniel Defoes Robinson Crusoe (1719), Arabian Nights and Jonathan Swifts Gullivers Travels (1726).

Other works written by Bulfinch include The Boy Inventor (1860), Shakespeare Adapted for Reading Classes (1865) and Oregon and Eldorado or Romance of the Rivers (1866). Thomas Bulfinch died on 27 May 1867 in Boston, Massachusetts. He lies buried in the Mount Auburn Cemetery of Cambridge, Massachusetts, U.S.A. The Life and Letters of Charles Bulfinch, Architect; with Other Family Papers, published in l896, was edited by Bulfinchs niece Ellen Susan. 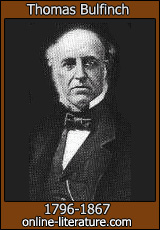 Here is where you find links to related content on this site or other sites, possibly including full books or essays about Thomas Bulfinch written by other authors featured on this site.