Search
Advanced Search
Virgil (70 B.C-19 B.C), regarded as the greatest Roman poet, known for his epic, the Aeneid (written about 29 B.C.E), which had taken its literary model from Homer's epic poems Iliad and Odyssey.

Virgil was born on October 15, 70 B.C.E., in a small village near Mantua in Northern Italy. Publius Vergilius Maro, or Virgil has influenced Western literature for two millennia, but little is known about the man himself. His father was a prosperous landowner, described variously as a "potter" and a "courier", who could afford thorough education for the future poet. Virgil attended school at Cremona and Milan, and then went to Rome, where he studied mathematics, medicine and rhetoric, and completed his studies in Naples. He entered literary circles as an "Alexandrian," the name given to a group of poets who sought inspiration in the sophisticated work of third-century Greek poets also known as Alexandrians.

After the battle of Philippi in 42 B.C. Virgil's property was confiscated for veterans. According to some sources it was afterwards restored at the command of Octavian (later styled Augustus). In the following years Virgil spent most of his time in Campania and Sicily, but he had also a house at Rome.

Between 42 and 37 B.C.E. Virgil composed pastoral poems known as Ecologues ('rustic poems' and 'selections'), spent years on the Georgics (literally, 'pertaining to agriculture'), a didactic work on farming, a townsman's view of the country.

Augustus Caesar pressed Virgil to write of the glory of Rome under his sway. Thus the remaining time of his life, from 30 to 19 B.C., Virgil devoted to the composition of The Aeneid, the national epic of Rome, to glory the Empire. Although ambitious, Virgil was never really happy about the task; it was like performing a religious and political duty.

Virgil accompanied the Emperor to Megara and then to Italy. The journey turned out to be fatal and the poet died in 19 B.C of a fever in contracted on his visit to Greece. It is said that the poet had instructed his executor Varius to destroy The Aeneid, but Augustus ordered Varius to ignore this request, and the poem was published.

Virgil was buried near Naples but there are doubts as to the authenticity of the so-called Tomb of Virgil in the area.

What is the theme of Virgil's Sunt mihi castaneos molles"? I haven't read anything about Virgil as I know not Latin. Thanks....

You, Tityrus, 'neath a broad beech-canopy Reclining, on the slender oat rehearse Your silvan ditties: I from my sweet fields, And home's familiar bounds, even now depart. Exiled from home am I; while, Tityrus, you Sit careless in the shade, and, at your call, "Fair Amaryllis" bid the woods resound. Virgil's Eclogues Ⅰ The word"neath" means "Beneath", and what's the quotation mark " ' " used for? Thanks. Gibran...

Posted By Gibran in Virgil, || 45 Replies

I am currently studying Viril, the Aeneid, book four. My teacher has set the near impossible task of an essay explaining what literary devices Virgil uses to take the reader on an "emotive journey". I was just wondering if anyone has any idea how i even start this essay let alone what i should include as the most important?! Please email me if you have any thoughts!...

Posted By arabella in Virgil, || 2 Replies 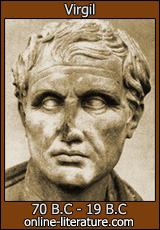 Here is where you find links to related content on this site or other sites, possibly including full books or essays about Virgil written by other authors featured on this site.