Crime is terribly revealing. Try and vary your methods as you will, your tastes, your habits, your attitude of mind, and your soul is revealed by your actions.Poirot, in The ABC Murders Ch. 17

and English spinster Miss Jane Marple (partly inspired by her maternal grandmother) who used her feminine intuition to solve crime. Her motto:

Some of Christies best-known works are The ABC Murders (1936), And Then There Were None [also known as Ten Little Indians] (1945), The Mousetrap (longest ever running stage play in London, first performed in 1952), Hickory Dickory Dock (1955), Witness for the Prosecution (1957), Murder on the Orient Express (1974), and Death on the Nile (1978). From her first novel The Mysterious Affair at Styles (1920) This affair must all be unravelled from within. He tapped his forehead. These little grey cells. It is up to themas you say over here. (Poirot, Ch. 10) to her last, Sleeping Murder (1976), Christie enjoyed a career that spanned over fifty years and her works have now sold into the billions. They have been translated to dozens of languages, inspired numerous other authors works, and have been adapted to radio, the stage, and film. As well as a writer of crime mysteries, she also read stories for BBC Radio, wrote non-fiction, romances, plays, and poetry.

Born in the family home Ashfield in Torquay, Devon, England on 15 September 1890, Agatha Mary Clarissa Miller was the youngest of the three children born to Clarissa Clara Margaret née Boehmer (1855-1926) and American Frederick Alvah Miller (1846-1901), who died when Agatha was just ten years old. The shy and sensitive Agatha, who was very close to her mother, had an older sister, Margaret Madge (1879-1950) and brother Louis Monty Montant (1880-1929). The family attended All Saints Church where Agatha was baptised. While she received no formal education, her mother and then governesses taught her at home to read before she entered finishing school in Paris, France in 1906. Having long been encouraged by her mother to write, Agatha continued to write there while also studying music (which became a life-long love), singing, and piano.

On 24 December 1914, at the age of twenty-four, Christie married Royal Flying Corps pilot Archie Christie, with whom she would have a daughter, Rosalind (1919-2004). During WWI Agatha worked as a nurse, tending to the ill and injured, many who were displaced Belgians. Their bewilderment and personal sorrows affected her deeply. She amassed a great deal of knowledge about sicknesses and poisons such as strychnine and ricin that she often featured in her novels. Around this time she also started writing her first novel The Mysterious Affair at Styles, an immediate best-seller. In 1926, profoundly grieving the death of her mother, Christie created some mystery of her own, disappearing for a time; when she was found she claimed that she had had a bout of amnesia.

In 1928, Archie divorced Agatha. She then set off on her first of many trips to the Middle East, travelling on the famed Orient Express from Calais, France to Baghdad, Iraq, then on to the ancient city of Ur in Mesopotamia. It was on her second trip there she met her future husband, archaeologist Sir Max Edgar Lucien Mallowan, (1904-1978). They were married in Scotland on 11 September 1930. She often accompanied him on digs as a member of the team, photographing and cataloguing finds. In 1960 Max was honoured as Commander of the British Empire (CBE) and in 1968 knighted for his archaeological work. Christie herself won many awards and honours in her life-time including; 1955, received the Mystery Writers of America Grand Master award; 1961, awarded an honorary degree from Exeter University; 1967, became president of The British Detection Club; and in 1971 she received Englands highest honor, the Order of the British Empire, Dame Commander.

In 1974 Christie appeared for the last time in public on opening night for her play Murder on the Orient Express. When she was not travelling the world, her and Maxs home in England was in the town of Wallingford, Oxfordshire, where she died peacefully on 12 January 1976. Max survived her by two years. They now rest together in the Parish Church cemetery of St. Marys in Cholsey, Oxfordshire.

I have enjoyed greatly the second blooming that comes when you finish the life of the emotions and of personal relations; and suddenly you findat the age of fifty, saythat a whole new life has opened before you, filled with things you can think about, study, or read about.... It is as if a fresh sap of ideas and thoughts was rising in you.An Autobiography (1977).

Anybody remember this story?

Hi everyone, I'm desperately trying to find a novel (or short story) by Agatha Christie. It is a locked room mystery where there is a gun shot up in the chimney by a rubber band or something similar. If anyone remembers this title, I'd be extremely grateful for it. I can't seem to find it anywhere and it's doing my head in :willy_nilly: Thanks a lot!...

Hi there, Agatha Christie fans might be interested in this documentary about going out on Irish radio - RTE Radio One - on Saturday 14th August.. Or you can podcast/ listen online on the documentary website: http://www.rte.ie/radio1/doconone/radio-documentary-agatha-christie-john-curran.html...

What do you think about Gerda?...

help: "and then there were none"

i want to read And then there were none by Agatha Christie but i don't know where to buy it i've already asked many bokstores if they have a copy of the book does any one know where i can find this book?? a sales lady told me it has another title, does anyone know it's other title??...

Will Someone Let The Woman Speak?

I have recently come across a book written by someone called Anne Hart. The book is titled THE LIFE AND TIMES OF HERCULE POIROT.It sketches the whole biography of our favourite Belgian detective.The book,unfortunately,fails to invoke interest but might be a fascinating read for Poirot's fans who can read almost everything related to him. If you have read books by Anne Hart(I think there is another one on Miss Marple too),what is your opinion about them?...

The genre that just won't die

Comics are to be Hercule Poirot's latest incarnation. It's the latest twist to crime fiction, a genre constantly reinvented in its 170-year history. When a story has been told and retold many times, it can wear a little threadbare. So it is with the murder mysteries penned by the original queen of crime, Agatha Christie, now associated with the genteel, sepia-tinged glow of a cosy Sunday in front of the telly. AGATHA CHRISTIE 15 Sept 1890 - 12 Jan 1976 First novel - featuring Poirot - published in 1920 66 novels, 154 short stories and 20 plays in 50-year career Outsold only by the Bible and Shakespeare Translated into 70+ languages Cosies - that is what such tales a...

i haven't read all of her works but i love all those i have read. everyone plzz tell me which novel/story of agatha's is ur own favourite. personally, i like 'The Pale Horse' (novel) and 'The Witness for The Prosecution' ( story)...

Has anyone read Christie's works under the pseudonym Westmacott? They aren't mysteries but rather are angsty heartwrenching novels that are semi-autobiographical in that they express how she felt about certain aspects in her life....

Hello Agatha fans! I know that this is not a forum to post this thread, but we need all support that we can get. I am sure that a lot of you have heard about David Suchet and his famous acting as Hercule Poirot. Almost all of the books with Poirot have been filmed... Almost... Still 12 is missing... So, there are no founds to keep filming the missing 12 books and the TV company decided to cut the expenses and finish the project. So sad :bawling: The next books are missing: The Big Four Murder on the Orient Express Three-Act Tragedy Appointment with Death Mrs McGinty's Dead Dead Man's Folly Cat Among The Pigeons The Clocks Third Girl Hallowe'en Party Elephants Can Remember Cur...

I'm looking for places in London associated with Agatha Christie and any of her books. I have the two hotels Bertrams is reported to be based on. The hospital Christie worked in during the war but that's it. Any suggestions would be appriciated...

Hello everybody! I would to know if Agatha Christie was married with "Max Mallowan". thank you!!! ps: I am french and I have a difficult for read and write in English. Sorry so if I am wrong :rage:... 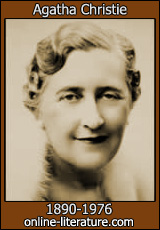 Here is where you find links to related content on this site or other sites, possibly including full books or essays about Agatha Christie written by other authors featured on this site.