The Wealth of Nations


The Heavyweight Champion of Economic Theory, The Wealth of Nations


The Scottish moral philosopher and economist Adam Smith took ten years to write his magnum opus. Had anyone taken a century to perfect it, no more powerful statement of the natural power of the free market when combined with personal liberty could have been produced. Not only is the book the foundation of classical economic theory, it is a statement of the moral imperative driving laissez-faire capitalism. The ultimate testimony came from John Maynard Keynes who lived his entire career seeking to refute Smith's book only to see his beloved England follow Keynesian economics and the progressive movement into horrendus inflation and watch the British Pound Sterling lose its two-century-old role as the world's reserve currency. Nearing death, Keynes made a "near deathbed confession". What did JMK say as his countrymen booted Churchill out of office so that the Labour (progressive) Party might bring on outlandish promises and outlandish inflation and destroy the once most honored currency in the world? Keynes whod dedicated his whole life in opposition to the 'invisible hand of the marketplace' (which Adam Smith always advocated) in favor of government involvement and control of markets, said, "I find myself more and more relying for a solution of our problems on the invisible hand which I tried to eject from economic thinking twenty years ago."--Submitted by Rajjpuut a.k.a. Robert Velasquez VanDeHey.

This work by Adam Smith is an enjoyable combination of high brain power and story telling of how nations and people worked together to create wealth. In the course of doing so Adam Smith provide an insight into morality, money, and many subjects which we deal with on daily basis without having any idea about their origin.--Submitted by Talal Shallawe.

Recent Forum Posts on The Wealth of Nations

It gives me a great deal to think about and ruminate over. I will be coming to this and related sites quite often in the future in order review. My question presently is the phrase "fascism is capitalism on steroids". Smith's book "Wealth of Nations" refutes such a premise but it still seems to be a favorite of professors.

I am searching for Smith's comments on the drive of owners of capital to interfere with the operationn of free markets, in order to maximize profits.
That information would be included in the essay following:

The Liberal/Libertarian nexus is a mess, politically and conceptually, right now. I have seen the term "anarcho-Libertarian"
used to describe the extreme forms of libertarianism which have been funded and used so successfully by the Corporatist
oligarchy to discredit government protection of free markets from predatory corporatism.

Liberalism can be anti collectivist, pro market and pro pluralist, reaffirming the Constitutional system of checks and
balances envisioned by the founders without adopting a policy stance that renders us incapable of dealing with the drive of
corporatist oligarchs to destroy markets.

Libertarians, on the other hand, are largely rendered impotent in the face of private actions to distort and prevent the
efficient action of markets by their near "religious" objection to government action.

In her article "Enron and the Myths of Runaway Capitalism" Marjorie Kelly, publisher of Business Ethics, describes some of
current problems of "invisible hand" theory. George Soros touches on it in his Essay "The Capitalist Threat". Of course
Adam Smith, in the "Wealth of Nations" addressed the same problems, though they were not quite as central to the
development of political economy at the time.

I have bought the edition of Wealth of Nations published by Everyman's Library. For their convenience they have left out book V. The editor informs the public only at the end of the preface and not on the cover ("abridged edition"). This is very bad. It is very helpful that You provide access to book V here. Thank You.

This book has proved to be the greatest source of information on the evolution of the capitalism. I understand, It's the greatest help for students, specially one who are interested in doctoral programes in economics. Finally, I would like to acknowledge the efforts of people, who are maintaing on-line-literature website. Nodoubt, your work is helping many students to a great extend.

I was very pleased to find your site, having just returned from the library only to find my classmates had beaten me to the 3 copies of Smith's works available. I am, as I write, using it as a source for my term paper on capitalism the ideology. You guys provided me with an invaluable service and I only wish more such influential sources were available in full, online. Thx =]

Thanks for having this online - very convenient should I decide to reference it in a future essay or presentation!

Post a New Comment/Question on The Wealth of Nations

Here is where you find links to related content on this site or other sites, possibly including full books or essays about Adam Smith written by other authors featured on this site. 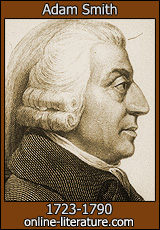