William Henry Hudson (1841-1922), British author, naturalist and ornithologist is best known for Green Mansions (1904), an exotic South American romance with Rima, the mysterious creature of the forest, half bird, half human.

William Henry Hudson was born 4 August, 1841, near Quilnes, province of Buenos Aires, Argentina, to Anglo-American parents. Their first home, his father's estancia on the Argentinean pampas was this young adventurers' first playground and from where he would later venture out on many excursions into the heart of his country. They were some of the most memorable years of his life.

The estancia was named "Los Veinticinco Ombúes", which means "The Twenty-five Ombú Trees", because there were actually twenty-five of those trees growing in a line on the property to be seen from ten miles away. With a three week long bout of typhus weakening him when he was 14 years old, then a bout of rheumatic fever a few years later, Hudson spent much time alone wandering the pampas, becoming a shy yet observant young man. His parents had many books for him and his siblings to read and now and then a visiting school teacher would be available for some formal education.

Gauchos, shepherds and vast flocks of wildlife surrounded and delighted him, and like Charles Darwin's Origin of Species, left a profound impression on him. Hudson travelled on horseback to Brazil, Uruguay and Patagonia, bringing home wide collections of specimens. He wrote remarkable accounts of his travels and observations, and including Darwin himself, gained the respect from many naturalists for his talent. Two South American bird species are named in honour of him.

Hudson's immigrant father struggled to make a life in the pampas. He unsuccessfully tried his hand at sheep farming, but had to sell his land, then he opened a store, but ended up turning to growing potatoes for a meagre existence, eventually nearing financial ruin. Not a lot is known of the years following the death of Hudson's parents, but he emigrated to London, England in 1869. In the city he spent many lonely years of poverty, far away from his beloved sorties to the countryside.

The first book of Hudson's to be published, and one of his most popular, The Purple Land That England Lost (1885) is about the Banda Oriental, describing how generals traded 200 British soldiers for the independence of Uruguay, to it's demise. Hudson's biculturalism is obvious here: his allegiance to his ancestral homeland, England, and the world of his childhood, Argentina.

Hudson also wrote a series of ornithological studies, including Argentine Ornithology, (1888-1899) The Naturalist in La Plata (1892) and British Birds. (1895) A few London journals published his articles and essays. Attention and admiration from Sir Edward Grey, statesman, for his many books on ornithology procured Hudson a state pension in 1901. Other of Hudson's early works, his romances in South American settings with Quixotic narrative, showed profound awe of nature's power, such as El Ombú (1892) and Green Mansions.

Hudson met and married the owner of a London rooming house and became a British subject in 1900. His nostalgic Edwardian English countryside books were also well-received, including Afoot in England (1909), A Shepherd's Life (1910) which some say is his best work set in rural England and A Hind in Richmond Park (1922).

Far Away and Long Ago (1918) Hudson's autobiographical, poignant memoir is about his early life in Argentina, roaming the Pampas, observing the flora and fauna and revelling in it's continuous splendour.

William Henry Hudson died 18 August, 1922, in London, England. He is buried in Worthing's Broadwater Cemetery, West Sussex, England. His epitaph refers to his love of birds and green places.

Hudson is a founding member of the Royal Society for the Protection of Birds.

I'd like to introduce Mr. Hudson by discussing just one single point. It won't make for a very specific reference, but I think it is a "critical abstraction" that is valuable to understand. I have on my desk the original two volume set of Birds of La Plata, published in 1920. No, I don't. It was just a pretty lie to see how it might feel. I have on my desk the single Capra Press paperback entitled The Bird Biographies of W. H. Hudson, printed in 1988. Its forty-nine chapters, each a life history of a different species, were taken from Birds of La Plata. Until 1900, bird-watching was what we would call bird-shooting. Naturalists carried guns and sacks instead of binoculars and fi... 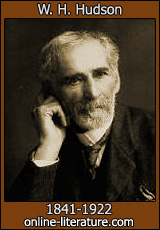 Here is where you find links to related content on this site or other sites, possibly including full books or essays about W. H. Hudson written by other authors featured on this site.