Praised by Lenin as "a very timely book" it is an empathetic study of the down-and-out, have-nots of Russian society and their lives on the eve of the 1905 revolution. Though dark at times it is also full of optimism and compelling characters, the main one based on his own grandmother. Gorky was a great writer but also an influential figure in tumultuous times of political upheaval.

"Long live, then, the proletariat as it goes forth to renew the whole world. Long live the working men of all lands who by the strength of their hands have built up the wealth of nations and are now labouring to create new life! Long live Socialism, the religion of the future. Greetings to the fighters, greetings to the workers of all lands, and may they ever have faith in the victory of truth, the victory of justice! Long live humanity fraternally united in the great ideals of equality and freedom!"
--from "Letter on the Russian Revolution", January 1, 1906.

Aleksey Maximovich Pyeshkov was born on 16 March 1868, in Nizhny Novgorod, Russia. Early on in life he experienced the harsh straits of poverty and transience of the dispossessed that he would later write about with such compassion. After the death of his parents he travelled throughout Russia and held many jobs including baker, dockworker, and painter. Although he tried to commit suicide in his early twenties, his grandmother seems to have been a stabilising force in his life, who inspired him to learn to read and write.

Gorky's collection of short stories Sketches and Stories (1898), published by a radical press, established him as a favoured revolutionary voice for the people. He married Ekaterina Pavlovna while working for the Samarskaya Gazeta. Foma Gordeyev (1899) was his first published novel. Gorky also wrote numerous plays, often preferring characterisation over plot. After his famous play The Lower Depths (1902) was released he spent a number of years in exile including travelling to the United States in 1906 to raise funds for the bolsheveik movement. He himself had been arrested a number of times for his political activity though his popularity saved him from the most severe punishment.

In 1914 he returned to Russia and the first of his autobiographical novels My Childhood appeared the same year, followed by In the World in 1916. My Universities (1922) is based on his self-education, universities being closed to peasants such as himself. Though he had many debilitating bouts of tuberculosis, he worked as head of the Writer's Union and continued work on his ambitious four-volume accounting of social conditions The Life of Klim Samgin (192736). Gorky writes of his friendship with Leo Tolstoy and Anton Chekhov in Reminiscences (tr. 1946).

Maxim Gorky died on 18 June 1936. There is some speculation that he was poisoned to death on orders by Stalin. His ashes are interred in the Kremlin Wall in Moscow, Russian Federation.

"Happiness always looks small while you hold it in your hands, but let it go, and you learn at once how big and precious it is."

There were no threads about Gorky so I decided to start one. If somebody doesn'y know Gorky(means bitter in Russian) is a pseudoname of Alexey Maximovich Peshkov- a Russian writer who became one of the symbols of social realysm. I've read his trilogy about his childhood and youth. It was pretty interesting, especially to compare it with similar work of Tolstoy. Of course, there is a huge difference in a social status of two writers- so there is nothing in common between their upbringings. Gorky started with short romantic stories in the late 19th century and some of them are pretty good. I remember a cool story about a tribe who lost their fire, so everything was dark and they were in the...

I'm reading My Childhood for a class, its by Maxim Gorky... I was just wondering if anybody had any thoughts on it or if they read. Also... what epectations of children are portrayed in the novel.... 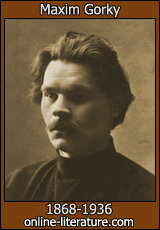 Here is where you find links to related content on this site or other sites, possibly including full books or essays about Maxim Gorky written by other authors featured on this site.