Émile Gaboriau was born 9 November 1832 in the village of Saujon, Charente-Martime, France. He was the son of Charles-Gabriel Gaboriau, a minor public official and Marguerite-Stéphanie Gaboriau (née Magistrel). He had a sister named Amélie.

Gaboriau attended the Tarasconsur-Rhône secondary school where he met Alphonse Millaud whose uncle would later publish his serial stories in Le Soleil. In 1850 Gaboriau became the apprentice of a notary but didn't enjoy clerical work. He joined the military as second-class infantryman of the Fifth Regiment in 1852. In 1855 he moved to Paris, and while a ghost writer for Paul Féval he also wrote for the satirical newspapers Truth and Din. This experience taught him the art of serial crime writing and he would spend innumerable hours in the cities' prisons, morgues and police courts seeking material for his crimes and characters.

Gaboriau considered himself a disciple of Edgar Allan Poe, who had created one of the first distinctive detectives, the enigmatic and eccentric C. Auguste Dupin in The Murders in the Rue Morgue. Gaboriau concentrated less on the criminal and the crime itself but focused more on the process of detection, gathering, and interpreting evidence. He was also a master at creating suspense. His first police detective novel The Widow Lerouge (1866) opens with the murder scene. Thereupon Gaboriau begins to weave the tale and layers of intrigue, using one of the standard tools of police investigation: logical reasoning. Possible witnesses are questioned, clues are analysed, deductions are made and arrests and interrogations ensue. There is usually a moral to the story. File 113 (1867) and The Mystery of Orcival (1868) followed. In the 1860s his works were translated and read in England, Germany, Italy and Japan.

Gaboriau's detective Monsieur Lecoq (1869) was partly inspired by real-life thief turned cop Eugène François Vidocq (1775-1857) who had published his memoirs in 1828. He had been sent to prison, escaped, and then reformed, eventually becoming Paris' Chief de la Sûreté. Lecoq is a master of disguise and scientific method, he understands the criminal mind. He wants to find a fair, not necessarily quick, resolution in the whodunit. Gaboriau was developing his ideas during a time of great change in the early 19th century. Cities were becoming increasingly dangerous and the evolution of the detective novel surely a reaction to an increase in organised police forces in cities all across Europe. Gaboriau weaves an authentic depiction of the criminal milieu while accounting for the social and cultural aspects of nineteenth century Paris and France. Titles following Monsieur Lecoq were: Baron Trigault's Vengeance, (1870) The Count's Millions, (1870) Within an Inch of His Life, (1873) and Other People's Money. (1874)

On 28 September 1873 Émile Gaboriau died of pulmonary apoplexy at 39 street Our-Lady-of-Lorette. He lies buried at the Montmartre Cemetery in Paris, France.

Over a century later Gaboriau's influence is still felt. The Honor of the Name (1903) and The Champdoce Mystery (1913) were published posthumously. 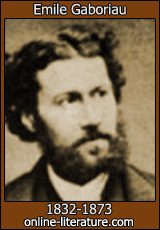 Here is where you find links to related content on this site or other sites, possibly including full books or essays about Emile Gaboriau written by other authors featured on this site.