Anthony Trollope was born on 24 April, 1815 at 6 Keppel Street, Bloomsbury, London, the fourth son of Thomas Anthony Trollope (1774-1835) and Frances (née Milton) (1779-1863). His father, who suffered from bouts of depression, was an unsuccessful lawyer and farmer. The family's humiliating state of poverty formed a lasting impression on Trollope, who was a tall, lanky, poorly dressed unhappy lad amongst the aristocratic youth of the famous schools he attended. In 1827, while Trollope attended his father's old school, Winchester, his mother left for America to assist in the set up of an English goods bazaar in Cincinnati. It was an architectural monstrosity and a total failure, pushing the Trollope family to the last stages of financial ruin. The family moved to Bruges, Belgium in 1834, where Frances supported the family with her writing which she was quite successful at. Her Domestic Manners of the Americans (1832) was well received in England. Trollope's father Thomas died in Bruges in 1835. His older brother Henry and his younger sister Emily died in Bruges too the following year.

Trollope started work as a clerk with the post office when he was nineteen years old and in 1841 went on to become the postal surveyor for Banagher, Ireland, which finally gave him some financial freedom and self-confidence and whereupon he picked up the sport of fox-hunting. This career of his was to provide much fodder for his future literary works, which he wrote in his spare time, such as The West Indies and the Spanish Main (1859). He travelled to Egypt, Scotland and the West Indies in 1858 and 1859 and the United States in 1861 on postal missions. In 1859 Trollope moved to Waltham Cross, just outside of London, to be surveyor general to the Post Office for £800 a year. Trollope is credited with the introduction of "pillar boxes", the now ubiquitous red British postal mail boxes.

In 1844 Trollope married Rose Heseltine and they had two sons, Henry (b.1846) and Frederick (b.1847). Trollope's study into Irish discontent, The MacDermots of Ballycloran (1847) was his first book, however, while in England he wrote The Warden (1855) the first of his famous Barchester Chronicles series, based on English upper middle-class Victorian life, which was his first acknowledged success. Barchester Towers (1857), Doctor Thorne (1858), Framley Parsonage (1861), The Small House at Allington (1864), and The Last Chronicle of Barset (1867) completed the series, readers especially enjoying his intense study of everyday social life, ecclesiastical politics and character developments in the imaginary cathedral city (modeled on Winchester) and the surrounding county of Barchester (modeled on Somerset). Trollope had finally come into his métier. He was successful and prosperous, much sought after by publishers and became friends with many literary figures including W. E. Forster and George Eliot. He was involved in some business dealings concerning various magazines and gazettes and even tried his hand at editorship for St. Paul's Magazine in 1867.

Trollope's Palliser series: Can You Forgive Her? (1864), Phineas Finn (1869), The Eustace Diamonds (1873), Phineas Redux (1876), The Prime Minister (1876) and The Duke's Children (1880) were well-received, and he also produced insightful novels on political and social issues of the day during this time. In 1867 Trollope resigned from the post office and unsuccessfully ran an election campaign as a Liberal parliamentary candidate. In 1871 to 1872 he gave up his Waltham house and traveled to visit his son in Australia, tirelessly writing along the way. In 1872 he moved back to London, following his strict regime of writing for many hours before breakfast, whether he was travelling to Ceylon and Australia in 1875, South Africa in 1877 or Iceland in 1878, or writing at home. He was also working on his Autobiography (1883) between October 1875 and April 1876 (published posthumously). His diligent, business-like approach to writing, as was revealed in his Autobiography offended many and he fell out of favour with some of his admirers after his death.

Trollope moved again in 1880 for want of better air, with hints of asthma and angina pectoris. He produced a few more novels the next year, one of them being The Plumber (1881). In May of 1882 he was staying at Garland's Hotel on Suffolk Street, Pall Mall, London. On the 3rd of November, 1883, whilst laughing during a family reading of F. Anstey's Vice Versa, he suffered a paralytic stroke. He died about a month later, on 6 December, 1883. He is buried in the Kensal Green Cemetery of London, England.

Hawthorne once wrote of Trollope's work: "Have you ever read the novels of Anthony Trollope? They precisely suit my taste; solid, substantial, written on strength of beef and through inspiration of ale, and just as real as if some giant had hewn a great lump out of the earth and put it under a glass case, with all its inhabitants going about their daily business, and not suspecting that they were made a show of."

I just wanted to write something about this, because I find it ever such a nice touch by Trollope. It's something I haven't come across (so far) in classic literature. Most authors seem to limit themselves to the 'proper' places, even for married couples, and forego the only really private room they have. Most of them therefore don't go further than private moments on strolls or in drawing rooms. The well-known couple-together-in-bed scene in comedies (think of Onslow and Daisy in Keeping up Appearances) and drama (various couples in Downton Abbey) is a peak into a couple's really private sphere. The bedroom is a rare private place, particularly in the world of 19th-century ...

If you could only read one Trollope book, which would be the one to pick?...

http://www.trollope-apollo.com/ When reading The Warden it proved to be very interesting to see what references Trollope used to say certain things. The website features several books of Trollope's and includes names as well as straight metaphores per chapter and per novel....

Help with the Warden

Hello All! First Time poster here! I really need some advice on the Warden for a literary critique coming up in my british literature class. I am required to write a 5 page essay on the characterization of Mr. Harding in this book. However, I am having a tough time doing this. So, if you could sum up Mr. Harding in 5 words, what words would they be and why? Thanks so much!...

Ok don't think I am an idiot I just don't know much about England's Parliament. Why doesnt it last long? It seems that Vavasor was only in for a few months and Finn was always whining about his seat not lasting long. But Plantagenet always had a seat? I am confused as to why when they would win an election it would only be for a few short months....

I recently read The Warden and Barchester Towers by Anthony Trollope. I really enjoyed both novels. The Warden was much shorter. It focused more heavily on Mr. Harding who I found to be rather boring. I thought Trollope did a wonderful job of showing us the internal struggle the warden went through. We were introduced to the Grantly children in a very creative way. I liked how the sisters are so very different, and how Mrs. Grantly behaved. I didn't exactly like the way Eleanor's struggle with her feelings for Mr. Bold played out, which wouldn't be a big deal, but it almost felt like that relationship was the purpose of the novel. It felt like the events occured just to give Eleanor...

I want to begin reading Anthony Trollope, but I don't know which novel to read first. Any suggestions are appreciated....

I have noticed no one ever posts in here but I am curious to see if there are other Trollope fans out there. I've just finished Phineas Redux, the fourth of the Palliser series and I absolutely loved it. I have grown quite fond of Phineas and Lady Laura just breaks my heart. I thought of her as something of a spoiled child at first, not feeling too sorry for her or her plight since she married simply for money and position and if she finds herself miserable, it's her own fault but those last few letters she wrote to Phineas were so devastating, I actually started to feel a little sorry for her. I have two more books to read in this series and then I'm moving on to the Barchester S... 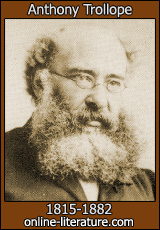 Here is where you find links to related content on this site or other sites, possibly including full books or essays about Anthony Trollope written by other authors featured on this site.