or, Life in the Woods


The work is part personal declaration of independence, social experiment, voyage of spiritual discovery, satire, and manual for self-reliance. First published in 1854, it details Thoreau's experiences over the course of two years, two months, and two days in a cabin he built near Walden Pond, amidst woodland owned by his friend and mentor Ralph Waldo Emerson, near Concord, Massachusetts. The book compresses the time into a single calendar year and uses passages of four seasons to symbolize human development. By immersing himself in nature, Thoreau hoped to gain a more objective understanding of society through personal introspection. Simple living and self-sufficiency were Thoreau's other goals, and the whole project was inspired by transcendentalist philosophy, a central theme of the American Romantic Period. As Thoreau made clear in his book, his cabin was not in wilderness but at the edge of town, about two miles from his family home.


This is Thoreau's famous autobiographical account of his experiment in solitary living; his refusal to play by the rules of hard work and the accumulation of wealth; and above all the freedom it gave him to adapt his living to the natural world around him.


Walden is an autobiographical account of Henry David Thoreau's experiment in simple living in a small one room cabin on the banks of Walden Pond in Concord, Massachusetts. He lived there 2 years and 2 months, he recounts in the beginning of the text, but condensed the narrative to just one year for clarity. The book is essentially Thoreau's exploration of just how simple one person could live, by looking at things in ideal terms and trying to work some of those things into his way of life. He asks, what are the essentials for a person to live and go about living? Noting that until these thing have been gotten, man cannot confront more meaningful pursuits. Some people have looked at Thoreau's attempts at living life simply as a lazy man's approach to life but at Walden his life was anything but lazy. He spent 4 hours a day walking in the woods, much of it, in observing and chronicling nature. He kept a 2 acre mini-farm, growing beans and other crops, doing all the work by hand. He occasionally hired his services out to townspeople doing odd jobs, surveying, carpentry and gardening. I personally have read Walden several times since a teenager. I am now 60. I have several copies of the book on the shelf, continuing to take one or another down to read some of the passages I had underlined years ago, and then underlining a few more. I always look on these times as visiting an old friend who has taught me many things about living and what I should see as important to put value on and strive toward.--Submitted by Mike Jordan.

So who else read the first chapter "Economy", and thought it was possibly the most boring and pointless drivel ever? I've read his work before, and I do like the rest of Walden, but the first chapter was so dull. :crash:

In the first chapter Economy Thoreau talked about shelters. He dug his own cellar in the side of a hill sloping, and then he went on to remark: Under the most splendid house in the city is still to be found the cellar where they store their roots as of old, and long after the superstructure has disappeared posterity remark its dent in the earth. I dont really understand their roots as of old. What are the roots? Why of old? Does it mean they store some roots of vegetation in the way our ancestors did?

Who can help me to explain some quotes in Walden :(

"Most men, even in this comparatively free country, through mere ignorance and mistake, are so occupied with the factitious cares and superfluously coarse labors of life that its finer fruits cannot be plucked by them" "There is no odor so bad as that which arises from goodness tainted. It is human, it is divine, carrion. If I knew for a certainly that a man was coming to my house with the conscious design of doing me good, I should run for my life, as from that dry and parching wind of the African deserts called the simoom, which fills the mouth and nose and ears and eyes with dust till you are suffocated, for fear that I should get some of his good done to me,-some of its virus mingled with my blood" "What is true for one is truer still for a thousand, as a large house is not more expensive than a small one in proportion to its size, since one roof may cover, one cellar underlie, and one wall separate several apartments"

Recommend me a thoreau book

i have a couple of his books. i started readign the one about him living in that house by himself, but found it quite hard/boring to get through. i feel like i'm missing something here. but anyway, what would you guys recommend as the best one to read? i'll try to start again with that.

Walden, by Henry David Thoreau Edited by Bill McKibben Published over a century and a half ago, Henry David Thoreaus, Walden, remains a masterpiece in American literature. One of the many ways Walden succeeds as a text is due to Thoreaus optimistic outlook concerning ones quest for self-fulfillment and a comfortable recognition of personal place in the world. The reason Thoreau chose to live at Walden Pond, just outside of Concord, Massachusetts, was because he wanted to live deliberately, to front only the essential facts of life, and see if I could not learn what it had to teach, and not, when I came to die, discover that I had not livedto live deep and suck out all the marrow of life. (85) Along with his own process of self-discovery, Thoreau simultaneously urges the reader to be more self-aware and live more consciously. Be it life or death, we crave only reality, but he questions if we are really living in reality or are only mere observers of life. Thoreau claims were not completely immersed in reality and to get there, to our own personal reality, we need to figure out our purpose. He writes, In eternity there is indeed something true and sublime. But all these times and places and occasions are now and hereAnd we are enabled to apprehend at all what is sublime and noble only by the perpetual instilling and drenching of the reality that surrounds uswhether we travel fast or slow, the track is laid for us. (91) Similar to the eastern philosophy of Buddhism which values the present moment as a way towards deeper understanding, Thoreau believes that truths are not only found in eternity, but in the now and here. It is our duty to recognize meaning in each moment, if we are to come to a better understanding of our self and the track that is laid for us.

This book has changed my life. At the age I am at now, I have passed through the portion of my life when I have attempted to lay up my treasures. Upon my milestone birthdate, I had not accomplished as much (materially) as others my age. This book has opened my eyes that I am much richer than I had thought.

I must fitfully resist slashing my wrists everytime I try to imbibe What is suppose to be an enlightening text. As for reading it.. do not.. I've resorted to reading everything else and memorizing all the other assigned texts so that I'll instantly know his drivel when I see it
Lorena M.

Nothing to compare to. Unbelivable tallent. Brings balance,peace and lot of reflections about your own life. Absolute wisdom. Sory, some people have actual problem with it.

Thoreaus' writings are magical and tremendously poetic. Writing about ice cyrstals as though they were diamonds! His creative thoughtfulness has helped to enrich my life on a scale I can scarcely measure........he feeds my soul when I am burnt out on the selfishness and hurried attitudes of people around me. It's almost as if I take a refreshing cool drink from the waters of his concisive wisdom.........his was a gentle, aware and loving soul....it is a shame, truly, that we don't have more like him living presently in this world today.

I enjoy learning about Henry Thoreau. He is intresting and cool. Thanks. Adumn T.

Here is where you find links to related content on this site or other sites, possibly including full books or essays about Henry David Thoreau written by other authors featured on this site. 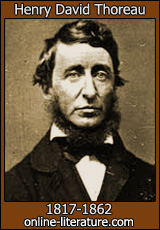