"Mrs. Warren's Profession" debuted at approximately the same time as Oscar Wilde's "A Woman of No Importance" and it certainly bears the same stamp of late-19th century feminism. Vivie, to a certain extent, represents the image of the "New Woman" a new image that essentially came into existence in the 1880's; a woman interested in her own education, personal freedom and employment and one who is generally uninterested in the traditional ideal of marriage and children. Shaw is among the few writers who portray the "New Woman" as a positive figure (as opposed to a danger to society). Indeed, more than anything else, "Mrs. Warren's Profession" stands as a condemnation of society at large, with several of its characters portrayed with negative connotations. Crofts, Shaw's representation of a high-society gentleman, is shown as a "most brutal type" and shows himself to be completely lacking in morality throughout the play. Even Mrs. Warren herself, the sacrificial mother, is described as a "domineering" and "vulgar" "blackguard." In this, Shaw demonstrates his political views. Shaw, who was a Socialist, uses "Mrs. Warren's Profession" both as a defense of women and as a condemnation of Capitalism as a whole. In his view, it is only people like Crofts, the monied upper classes, who benefit from Capitalism, while the poor, like Mrs. Warren, must trade dignity and morality for success. "Mrs. Warren's Profession" is to an extent, Shaw's image of what great and terrible lengths Capitalism forces people to go to; forcing them into hypocrisy and into hurting the ones they love. Not even Vivie, the image of a good and modern woman, is left untainted by smear of Capitalism. Thus, "Mrs. Warren's Profession" sounds Shaw's call for both social and political revolution. --Submitted by Yelena

Here is where you find links to related content on this site or other sites, possibly including full books or essays about George Bernard Shaw written by other authors featured on this site. 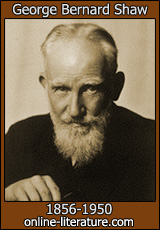