Literature Network » F. Scott Fitzgerald » This Side of Paradise

This Side of Paradise

This book is as much about human nature, our understanding or lack of understanding of ourselves, and the ups and downs of modern society, as it is about setting, which is sometimes ill-percieved as the plot. I highly recommend reading this book because not only is it entertaining, but also useful towards our own reflection.--Submitted by Anonymous.

Recent Forum Posts on This Side of Paradise

This Side of Paradise.

“This Side of Paradise” by Scott Fitzgerald. Let’s start with the story and its structure. It’s the tale of Amory Blaine, a young mid-Westerner who believes he will achieve extraordinary success in life. He goes to boarding school and then to university, falls in and out of love, drinks too much, tries to write, goes to war, works briefly in an advertising agency and endlessly philosophizes alone and with his friends. Amory is a handsome, charismatic, intelligent, and insecure boy who grows up to be a handsome, charismatic, intelligent, and insecure man. The novel was written when the author was only twenty-three years old and perhaps it shows, as sometimes it’s as if Fitzgerald is writing about writing before he knows how to write. It's not what I would call a great book but it's a sincere book. You can tell he put everything he had into it; his life, loves, poetry, every idea, every experience--he crammed it all in. A lot of it doesn't fit together. Not all of it is interesting but the saving grace is that behind it all there's this exuberance and passion. There is a rambling structure; Amory met this girl, made this friend, met this new girl etc. This surprised me, as two of the main elements of “The Great Gatsby” are its concise plot and thematic unity. Apparently Fitzgerald figured that out later. If the novel is to be read as a barely concealed biography of a young F. S. Fitzgerald, it makes the read so much more intimate. Fitzgerald's ego and his insecurities, his relationship with his wife Zelda, his desire for success, and the cynicism of the age are all there in the text. Literary novels with a male protagonist are however hard sells, (even at that time,) and the problem with using a bright, young man as a protagonist is that bright young men can be tedious. What’s needed in a literary male protagonist is a delicate balance of sensitivity and strength that we don’t normally see in the real world. Thus most of Hemingway's male leads were war veterans or soldiers or, in the case of “The Old Man and the Sea,” handicapped with age. Other ways to get around the unsympathetic male protagonist is with pure youth e.g. Catcher in the Rye, or by insanity as in Captain Ahab in Moby Dick. Where Fitzgerald succeeds is with his execution of the class snobbery factor (something that he wasted no time in establishing in The Great Gatsby). Armory Blaine is sensitive and weak in many ways—for example his vanity—but since he is a Princeton student and literary scholar, we know he also has dominance. Leaving aside these flaws in plot and structure, Fitzgerald’s’ descriptions and his flow are so beautifully executed that it takes some of the attention away from a non-active story. He knows how to manipulate language, and we see that he is a talented writer. In fact he has the uncanny ability to be witty, observant, and uniquely descriptive at one and the same time. Some people, (particularly young people) don't know what to do with their lives, and one might argue that the rich are different from the rest of us. In “This Side of Paradise,” the Egotist steps into the labyrinth of the rest of his life and realizes he knows himself and nothing else. Or as an emerging young American would put it, “Where now he realized only his own inconsequence, effort would make him aware of his own impotency and insufficiency.”

Does anyone else think that Amory Blaine has borderline personality disorder? For those of you unfamilar with BPD, here is the diagnostic criteria (at least five must be met for a diagnosis): 1. frantic efforts to avoid real or imagined abandonment. Note: Do not include suicidal or self-mutilating behavior covered in Criterion 5. 2. a pattern of unstable and intense interpersonal relationships characterized by alternating between extremes of idealization and devaluation. 3. identity disturbance: markedly and persistently unstable self-image or sense of self. 4. impulsivity in at least two areas that are potentially self-damaging (e.g., spending, sex, substance abuse, reckless driving, binge eating). Note: Do not include suicidal or self-mutilating behavior covered in Criterion 5. 5. recurrent suicidal behavior, gestures, or threats, or self-mutilating behavior 6. affective instability due to a marked reactivity of mood (e.g., intense episodic dysphoria, irritability, or anxiety usually lasting a few hours and only rarely more than a few days). 7. chronic feelings of emptiness 8. inappropriate, intense anger or difficulty controlling anger (e.g., frequent displays of temper, constant anger, recurrent physical fights) 9. transient, stress-related paranoid ideation or severe dissociative symptoms I'll need to read the book again, as it has been a few years, but I recall that Amory's struggles with his identity were a key part of the novel. He also tended to idealize certain people, his emotions were unstable and he was particularily prone to depression, he was easily angered, possibly experienced feelings of emptiness, and he had an "episode" in which he believed "the devil" was following him. Does anyone agree with this or have an alternative theory?

This Side of Paradise

At first I liked it, then I lost interest. I went back and forth but, overall, I think it was very overrated. What do you think?

What is the meaning behind the title, in your opinion?

My Side of Paradise...

is This Side of Paradise I'm no expert on literature, and I havn't read every classic. But I've never read a book that moved me as much as This Side of Paradise. It has slowly surpassed Pride and Prejudice as my favorite book, as it made me think intellectually more than anything else ever has. I love Amory's character, his arrogance and his pursuit of happiness struck me as the most real emotions one could describe. His relationship with the Monsignor reminded me of a similar relationship with a mentor, and I was continually intrigued by his references to becoming a Personage. Fitzgerald beautifully depicts Amory Blaine's shaky transcendence into adulthood and his honest feelings about the world. I, as some of you have previously mentioned, enjoyed This Side of Paradise much more than The Great Gatsby. I would agree though, that The Great Gatsby is perhaps a more solid book. But I think the at times irregularity of This Side of Paradise makes it that much better- the book is as real as it's subject.

As a high school junior, I am writing a paper on the Lost Generation, of which Fitzergald was a part. I read This Side of Paradise 2 years ago and found it absolutely amazing, though it does not capture the Roaring Twenties as Gatsby does. I think any high school or college male could relate to Amory and any female could relate to experiences with guys like Amory. This was just one of the many reasons I have chosen to write a 30 page paper on this topic.

This is my lovely, humble opinion, that This Side of Paradise is a great literary work. Amory was the perfectly constructed bundle of contradictions. He was a bit on the shallow, narcissistic side, but insecure nevertheless. He made superficiality appealing to me. Egotism makes a comeback! Amory was arrogant, but it was at least bound to his intelligence. Somewhat.
You have to give him leeway for his erratic emotional state. He had various love losses that led to drinking. Because we all know that alcohol cures everything (note the sarcasm, please).
I'm likely to be the only person to think this was better than The Great Gatsby, which I had to write a book report/analysis thing on for my A.P. History class. Fun(again:the sarcasm.)
To sum it up, as I tend to babble, This Side of Paradise was amazing, I love Amory, he's awsome. Great plot, and has anyone seen the movie? If so, is it good?

p.s. if this seems stupid, immature, or just terrible, please take into acount that i'm a high school sophmore. thank you.

I would disagree with the person who said the book fails to capture the Roaring Twenties. All the themes of the twenties are here--the liberated woman, the tendency towards excess, etc. Remember, when this book hit the shelves women were using it virtually as a handbook. He not only captured the mind of a generation, he anticipated a movement. I think the reason this book is less well-liked than Gatsby, (other than the fact that it's not "clean" stylistically or grammatically), is because of the emotional fluctuations. It's easier to learn about the Twenties in the Great Gatsby without the meddling influence of Catholicism. Personally I like this book for more sentimental reasons--because I like to hold on to the vision of a young man pinning the chapters up to his curtains in his Minnesota home, and then quitting his job the day it was accepted for publication. All F. Scott wanted in his whole life was to be a writer, and this book carries all of his hope and youthful idealism in it.

I am recently doing a biography on Fitzgeralds writings and i injoyed this book. For anyone looking to read it, i would recomend it. I think that alot of writings people do are from their own state of mind, so who are we to criticize a work that you might not understand.

Yes, I found the book a bit slow, but it was worth it.

It seemed to me this book was less about the net worth of a generation, less about social understanding, and had everything to do with the education of Amory.

An interesting name to choose, also. Amory. Amo, Amore- To Love. Or the act of loving.

To presume that this book is about anything other then the main character is a vacant attempt to read the novel. It's a character study, but more importantly, it's the truth Amory comes to; Ultimately, he realizes that he is selfish, but intellegent, Loving, but lost, and all of these virtues are him. And the only thing he can do about anything is to be him, with no pretension as to anything else.

And when is self-discovery anything other than recognizing your place, your thoughts, and your ideals during your time period?

Sure, we can read this book and bring out of it a sense of Amory's generation- the American Riche of the teens and the twenties, as we could any novel of the time period. We could understanding the growth of a boy to a man, as we would any story spanning the length of a man (Or Woman's) life, but we miss the subleties of the novel if we generalize his work.

Post a New Comment/Question on This Side of Paradise

Here is where you find links to related content on this site or other sites, possibly including full books or essays about F. Scott Fitzgerald written by other authors featured on this site. 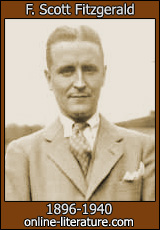