This translation, first published in 1909, is by Henry Wadsworth Longfellow (1807-1882), American professor and poet


"Inferno" by Dante Alighieri is an epic allegory of the spiritual journey of man. Virgil, Dante the pilgrim's guide, leads him through the 7 layers of hell. Throughout his journey through the torturous layers, Dante discovers the perfection of God's divine justice and themes of contrapasso are largely explored. Classical symbolism and classical figures are constantly referenced. This serves to emphasize that God's power rules over all - even pagan characters/figures. Dante also uses structure prominently to emphasize the trinity. By organizing the poem into 3 line stanza's consistently, it emphasizes the perfection of the Father, the Son and the Holy Spirit. Similarly, pay close attention to the numbering of Cantos. The number symbolism of '3' for the trinity, and '7' for the holy number is consistently used throughout the work.--Submitted by Anonymous.

The Divine Comedy is a classic that has survived and will survive for many years, and rightfully so. Dante Alighieri is exiled from his beloved city of Florence and now wanders from village to village in search of his past love and of himself. On this journey, he explores the sin of man through several levels of hell, each with a predefined purpose. With the help of his guide, Virgil, who is also a resident of a said layer, he descends through the various planes of hell, examining each to see God's absolute justice to those who have wronged in their lives. Prepare yourselves, for this is no ordinary book; it is an examination and juxtaposition of the body, spirit, mind, and human condition.--Submitted by AxelPower

How to read modern verzionns of text?

I wondering what the best way to read Dante's Divine Comedy? I am starting with 'Inferno'. The version I have has and introduction an numbered explanation of parts at the end of each Canto. Is it better to read all components of text, to read only certain components of each Canto, or is it necessary to read this work more that once? I ask this because, if I read all three parts of the cantos, I lose the flow of the poem itself. BUT, if I may miss the comprehension and fear I will not fully appreciate the beauty, knowledge, and historical significance of Dante's work. I believe this is one of the most influencial and inspirational works ever written, and want to get the most out of reading it as possible! How do you recommend reading Dante's 'Inferno'; in it's entirety, piece by piece, or more than once? Thank you!

How to read modern verzionns of text?

My version- maybe all versions- of the translated poem come with an introduction and a numbered explanation of original text in each canto. What is the best way to read Dantes Divine Comedy for the first time? Is it most beneficial for the reader to study all three elements? Or should you stick to reading only parts of it? I'm asking because, when I read the entire text I seem to lose the flow of the poetry. BUT, when I do not read the explanations of the poem, I am confused by the poem itself. Or is it necessary to read the book in it's entirety more than once to retain it's meaning, knowledge, and history? I just want to get everything I can out of this reading; I think it is an important part of our history as well as an exceptionally informational piece of literature to study.

How to read modern verzions of text?

My version- maybe all versions- of the translated poem come with an introduction and a numbered explanation of original text in each canto. What is the best way to read Dantes Divine Comedy for the first time? Is it most beneficial for the reader to study all three elements? Or should you stick to reading only parts of it? I'm asking because, when I read the entire text I seem to lose the flow of the poetry. BUT, when I do not read the explanations of the poem, I am confused by the poem itself. Or is it necessary to read the book in it's entirety more than once to retain it's meaning, knowledge, and history? I just want to get everything I can out of this reading; I think it is an important part of our history as well as an exceptionally informational piece of literature to study.

Looking to get a dialogue going on anything Dante related

Hit me up with anything, Divine Comedy or otherwise. I'm working on several projects in my graduate program that revolve around Dante's works, including researching how people discuss the subject, and with what kinds of language they dialogue (formal vs informal, etc), especially in online settings. I'm a huge Dante buff, so there are personal reasons too. One suggestion I will throw out: author Marcus Sanders has paired with an illustrator to create a modern version (as in set in modern times) of The Divine Comedy in contemporary language. This is interesting because Dante is classically paired with Gustav Dore's illustrations. Reading the two versions of the Inferno side by side could be fun and interesting. Any takers and / or other suggestions?

Hey, So I'm not a Dante expert. I read part of the books and had some summaries on it. I watched the new movie "as above so below" last week. It is full of Dante. As far as I am right now I managed to find like 90% of the Plot in Dante and matched the fitting scenes. However this only works if the first Ring of Hell the limbo is at that exact location. For those who haven't seen the film: It's about an archaeologist who searches for the philosophers stone in the Paris Catacombes. As they decend the meet famous scenes from Dante till they reach the final floor. Now in the first Circle ( where I think it is ) they find the tomb of Nicholas Flames, the man who made the Philosophers stone and who set up that treasure hunt and all the traps. They find him laying on a stone wearing a uniform with a big red cross on it, like the crusaders had. Now that makes me think. I know Dante is full of that question whether it was right to act like that in the holy land and that the priests promised them that what they do is right but neither was Flamel a Crusader nor do they belong into limbo. The author of that story seemed to have quite some knowledge about Dante. Otherwise he would have set up things like being buried head down in the 8th circle and so on. So I guess he had Flamel wear that for a specific reason. Too bad I played that videogames about Dante. That gave me some wrong ideas about the background story. So I have to ask you about that. Could you imagine a reason why a Crusader might be in limbo ? Some criticism against what they did ? Cause usually there are people who did everything well and never broke a law but just lived before Christ and thus never had a chance to convert to Christianity. That was Middle Age's Believe, seeing that from a different perspective I'd say, that the crusaders are less Christs that those who never converted to it. They didn't know any better but they acted and sinned in the name of god and hoped that that would just be enough to deliver them from their sins. May this be the answer here ? Is there any scence in Dante where something like that is mentioned ?

In Dante Alighieri's "Inferno" in Canto XXXII on Line 70, it says: "And after that I saw a thousand faces made doglike by the cold; for which I shudder- and always will- when I face frozen fords." Now this is during his travels across "The Ninth Circle of Hell, the First Ring, in which Traitors to their Kin are immersed in the ice, heads bent down." First question. When he says "heads bent down" does that mean they are stuck in the ice with their head at the greatest depth compared to their body? (so legs stick out of the ice while the heads are submerged like the people of The Eighth Circle, Third Pouch, where the Simonists are set, heads down, into holes in the rock, with their protruding feet tormented by flames.) Second question. When it says that their faces became doglike what qualities of a dogs face do you suppose he refers to?

Milton's Satan posits that it is "better to reign in Hell than to serve in Heaven." I was re-reading the Inferno over the past few days and picked up on how many times Virgil wards off threats by claiming that the pilgrim's journey came from up high, and thus he was guaranteed safe passage through the underworld. For those more familiar with Christian mythos than I, or with Dante's text - is there any president for God having sway in Hell? I always thought that Hell was Satan's land and God has no power there. Of course, Jesus barging in uninvited, breaking down the gate and doing some "harrowing" is a whole other matter, but why do the various demons back off as soon as Virgil tells them that they are sent by God? Is this just a convenient device for Dante (the poet) to get through this part of the pilgrim's journey, or is there more to it that I am missing?

where is this quote from?

In E.M Forster's A Room with a View George says "My father says that there is only one perfect view--the view of the sky straight over our head" and cecil replied "I expect your father has been reading Dante" I've been leafing through some of Dante's work but I haven't been able to find any reference of it. Does anyone know where this is from?

Basically I'm looking for the quote in the canto's about each description of that circle. Like Virgil explaining which circle of hell they are in. Thanks guys!

This topic looks dead to mine eyes... Anyways, I just wanted to post this for all those who still dwell in the depths of this division. I was reading The Inferno the other day and noticed something. In Canto XXI when Dante and Vergil encounter those demons, it goes as: "And he had made a trumpet of his rump" (the last words of Canto XXI) I started laughing out loud. THAT DEMON IS FARTING!!! XD And to the looks of it, it looks like he's farting to signal the other demons with him! :P Woah... Strange. Until next time, I guess... ~QLintz

Here is where you find links to related content on this site or other sites, possibly including full books or essays about Dante Alighieri written by other authors featured on this site. 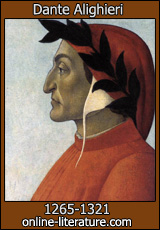