"They spurred their horses back across the creek and ran to rescue the girl. But she had flung herself forward face down far out of their reach. They dared not venture into the quivering bog after her. While they still stared in a frozen horror, the tragedy was completed. The victim of their revenge had disappeared beneath the surface of the morass."--prologue, A Man Four-Square

William MacLeod Raine was born on June 22, 1871 in London, England, to William and Jessie Raine. After the death of his mother Jessie when William was aged ten, the Raines emigrated to the United States, settling in Arkansas. After graduating from Oberlin College, Ohio, in 1894, Raine headed west and established himself as a reporter in Denver, Colorado. His non-fiction work Famous Sheriffs and Western Outlaws (1920) is a moving account of the trials and tribulations of Pioneers settling the West. It details the conflicts with Native Americans and themselves, often settled at the end of a six shooter. Buffalo roamed the prairies and depraved and desperate men prowled the saloons and dance halls. Gambling, prospecting, hunting and drinking, men find their notoriety and fame in the new hierarchy of outlaws, rustlers, marshals and sheriffs. With fast-paced plots and a variety of settings, Raine's fiction and non-fiction works embody the Spirit of the West, often in cowboy vernacular. They also inspired many films.

William MacLeod Raine died on July 25th, 1954, and lies buried in the Fairmount Cemetery in Denver, Colorado, USA. He was posthumously inducted into the Hall of Great Westerners of the National Cowboy and Western Heritage Museum in 1959.

Other Raine titles include; 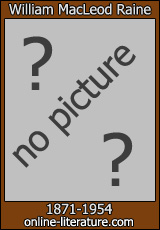 Here is where you find links to related content on this site or other sites, possibly including full books or essays about William MacLeod Raine written by other authors featured on this site.