Horatio Alger Jr. (1832-1899) was a prolific American author of boys adventure stories whose heroes lead exemplary lives to Strive and Succeed in the face of adversity and poverty, good and evil.

Horatio Alger Jr. was born on Friday the 13th of January, 1832 in Chelsea, Massachusetts, the oldest of five children. He developed near-sightedness and asthma as a youngster, and wasnt to excel academically till many years later.

His mother, Olive (née Fenno) Alger, was the daughter of a wealthy merchant. His father, Horatio Alger Sr. earned his living as a Unitarian Minister, but supplemented his meagre ministerial income by becoming the first postmaster in town, tending a small farm and occasionally teaching grammar school. But the family never really got out of economic straits, whereupon they left the town in 1844 to go to Marlborough. It was here that Horatio entered prep school and started to excel with his studies.

In 1848, sixteen year-old Horatio was accepted to Harvard University with financial assistance from his fathers cousin Cyrus Alger, and embarked on the happiest four years of his life. Studying under such illustrious teachers as Henry Wadsworth Longfellow, Horatio started to hone his writing skills with poetry, short sketches and academic essays on topics from chivalry to Miguel de Cervantes, earning the title Class Poet and winning many awards and prizes.

Alger was initially not as successful when, upon graduating, he submitted stories to various magazines and newspapers only to have them rejected. Carl Cantab and Charles F. Preston were two of the pseudonyms he used to publish the works that he felt were second-rate. Not earning enough to support himself by writing, Alger took on temporary teaching positions, which allowed him the time to continue writing, mostly comedic adult stories for monthly publications. Subterfuge, sexual innuendo and bachelors being tricked into marriage were prophetic themes.

In 1854 Alger left Cambridge to take a teaching position in Rhode Island, only to return three years later to attend Theological School for three years. He then went on a tour of Europe which he enjoyed immensely, sending letters back home to be published in the monthlies to defray his travel costs. Upon return ten months later he found himself docking in Boston at the start of the Civil War. Drafted and with his slight stature (he was five feet-two inches tall) and poor health he was assigned to the home front, during which he and a sixteen year-old soldier named Joseph Dean maintained an intimate correspondence. Following the War, Alger wrote the well received Franks Campaign (1864), the story about a young boy who organizes a junior army while his father is fighting in the Civil War.

Alger then accepted the call to minister at the First Unitarian Church and Society of Brewster, Massachusetts in 1860. He capably performed his duties and was welcomed by the congregation. After a period of a year however, rumours of depraved and unnatural acts began to surface that threatened Alger's security in the ministry. An inquiry and two boys confirmed charges of molestation and Alger left the church. Writing became a solace for him, one product of it being the poem Friar Anselmos Sin (1875), the process of expiating sins through atonement producing a great many works of note during this period.

At the ago of thirty-four, Alger moved to New York and got involved in assisting the homeless, particularly post-Civil war juvenile delinquent boys. He helped to secure public support for them and establish boarding homes, sometimes called Newsboy Lodging Houses. He himself took in needy boys who were often the inspiration for his stories characters, including the extremely popular serial Ragged Dick (1868). Finally finding his `voice Alger continued to produce another eighteen novels in just six years including Fame and Fortune (1868), Mark the Match Boy (1869), Rough and Ready (1869), Ben the Luggage Boy (1870), Rufus and Rose (1870) and Sink or Swim (1870). At this time, Alger was approached by his old school-mate Joseph Seligman, who proposed that he become his sons live-in tutor, which he accepted for seven years.

In 1874, Alger began to spend less and less time in New York as his asthmatic lungs gave him trouble with all the soot and smoke from the busy city, so he sought respite in his native New England and further travels across America. He continued writing but knew he was lacking in new material. Bound to Rise (1873) and its sequel Risen from the Ranks; or, The Story of Harry Waltons Success (1874) were the result of his creating new settings and themes outside of a city. The books sold well but the market was saturated with juvenile stories, so, after a few attempts at a different genre, his loose biographies of young American heroes started to sell. It would be unpatriotic to criticise them, but they conveyed villains who drew parallels with the current socio-political climate of the times but sales didnt last long. Alger was entering the twilight of his career by mid 1880. He lived in boarding houses as he no longer worked and lived with the Seligmans and loneliness and depression set in.

In the mid 1890s Algers interest in assisting needy boys started to wane and in 1896 he left New York entirely to live with his sister Augusta, in Natick, Massachusetts. Plagued by health concerns and with a partial manuscript that he desperately wanted to complete entitled Out for Business (1900), Alger asked a previous editor, Edward Stratemeyer, if he would ghostwrite the remainder of the novel. He readily agreed and although he finished the work by December 1898, Alger couldnt read it due to an eye condition.

Horatio Alger died on 18 July, 1899, at his sister's home, of heart disease. He had left instructions to Augusta that his funeral was to be as private as possible, with as little personal detail as necessary released to the public. His true age was not reported at the time of his death and his remains were promptly cremated before burial. According to his wishes, Augusta destroyed all of his personal writings and correspondence, making it difficult for historians to document his life with such a dearth of primary sources. His will left almost everything to family and friends.

It seems that Horatio Alger's claim to fame was that he invented, or at least mastered, the "rags to riches" plot-line, especially with his Ragged Dick series. Do you think his stories are still relevant? or is the prevalence of social media over-shadowing print publications? How often do younger people actually read paper books anymore?... 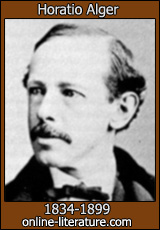 Here is where you find links to related content on this site or other sites, possibly including full books or essays about Horatio Alger written by other authors featured on this site.