Grace Richmond's first short story was published in 1891. By 1898 her stories were appearing in various women's magazines including the Women's Home Companion, Ladies' Home Journal and Everybody's Magazine. She wrote 27 novels between 1905 and 1936. Red Pepper Burns was published in 1910. Like most of her strong-willed yet compassionate characters, Redfield Pepper or R.P. Burns is a kind, old-souled country doctor who makes house calls. His fiery red hair and temper to match earned him his nickname Red Pepper, though he is still a charming and endearing gentleman. Mrs. Red Pepper (1913), Red Pepper's Patients (1917), and Red of the Redfields (1924) followed.

The Second Violin was published in 1906. On Gay Street and On Christmas Day in the Morning followed in 1908 and Strawberry Acres in 1911. Richmond writes about romance, mystery, and a deep love for home in The Twenty-Fourth of June (1914). The Brown Study (1919), Foursquare (1922), and Cherry Square: A Neighbourly Novel (1926) were some of her works to follow. Grace S. Richmond died on November 28, 1959, and is buried in the Forest Hill Cemetery in Fredonia, Chautauqua County, New York, USA. 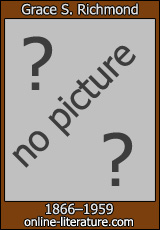 Here is where you find links to related content on this site or other sites, possibly including full books or essays about Grace S. Richmond written by other authors featured on this site.