Nikolai Vasilievich Gogol (1809-52) Ukrainian-born Russian author and dramatist is deemed by many as the Father of Russia's Golden Age of Realism.

Nikolai Vasilievich Gogol was born on his parents estate in Sorochintsi, Ukraine, on 31 March, 1809. He was the first son to Vasili and Maria (née Kosiarovski) Gogol. Though his real surname was Ianovskii, his grandfather had claimed his noble Cossack ancestors name `Gogol'. Nikolais younger brother Ivan died when Nikolai was ten, thus profoundly affecting his character, always in search of his next best friend.

Young Nikolai attended the Poltava boarding school, and then went on to Nehzin high school from 1821 to 1828, where he wrote for the schools literary journal and participated in theatrical productions. With a certificate attesting to his right to `the rank of the 14th class' he moved to St. Petersburg in 1829 teaching history at the Patriotic Institute and tutoring from 1831-1834. At this time he ventured to publish, at his own expense, his epic narrative poem Hanz Kuechelgarten, the result of his reading German Romantics. It was not well-received.

After plans to enter into the civil service, Gogol decided he would try to make a name for himself in literature instead. Like his grandfather, fierce nationalistic pride and admiration of the simple Cossack life is often an underlying theme in Gogol's works, blending the past and present, the Golden Age fading into the Iron Age, the folk and grotesque. His often nostalgic social commentary and exposure of surreal human defect tends to tribute the absurdist struggle of the Ukrainian people who he loved so much. The conflicts between Westernisation and the slavophilic tendencies of older generations, from stories told to him by his mother and others around him provided much fodder for him, a prime example being Evenings on a farm near Dikanka (1831 - 1832) which was a huge success. Gogol met the great Russian poet Aleksandr Pushkin in 1831 who would become a great friend and influence until his death in 1837.

Gogol turned to writing full-time when his position as assistant lecturer in World History at the University of St. Petersburg (1834-1835) failed. It was at this time that he published his collection of short stories Mirgorod (1835), containing the Sir Walter Scott influenced Taras Bulba, Old World Landowners, the comical satire The Tale of How Ivan Ivanovic Quarrelled with Ivan Nikiforovic and Viy. Gogol worked on St. Petersburg Stories (1835-1841) next. The Nose, a masterful comic short story (1835) was later turned into an opera. Release of Diary of a Madman (1835) and The Overcoat set in St. Petersburg and deemed one of the greatest short stories ever written, was overshadowed by his The Inspector General (1836), a satire of sweeping indictment about provincial officials and turned into a stage production. It caused much controversy whereupon Gogol fled to Rome where apart from a few brief visits he stayed for twelve years.

Dead Souls was published in 1842, a satirisation of serfdom, seen by many as the first `modern' Russian novel and a call for reform and freedom for serfs, much to Gogols chagrin. In response, a few years before he returned to Russia his Selected Passages from Correspondence with Friends (1847), illustrating his high regard for the autocratic tsarist regime and patriarchal Russian way of life caused disappointment among the radicals who were looking for more of Gogol's social criticism. To him slavery was justified in the bible and need not be abolished. "It is no use to blame the looking glass if your face is awry." (Gogol, 1836) It was not well received and political factions in Russia responded angrily.

Gogol had a gift for caricature and imaginative invention, influencing many other upcoming writers including Dostoevsky, but was often misunderstood. He was a deeply sensitive man, tormented throughout his life with moral and religious issues. As he got older, the criticism of his writing from his peers increasingly drained his spirit. Turning to religion, Gogol made a pilgrimage to Jerusalem in 1848. Upon return, greatly depressed and under the influence of the religious fanatical priest, Father Konstantinovskii, Gogol subjected himself to a fatal course of fasting and died on the 4th of March, 1852, at the age of forty-two. He lies buried in the Novo Devichy Cemetery in Moscow, Russia.

Can anyone help me to find how is oppression in 1. Gogol's overcoat 2. Camus' The outsider (stranger) and how is that oppression?? as i dont know how to say for this 'oppression' it's quite hard. and i have no idea about it. zillion of thanks!!...

The Diary of a Madman

Well, i've watched it on stage...just one person was playin'... it's about a poor and lonely madman ,his forces to face himself and the unreachable lady he's in love with.Sometimes humorous (referring a dog and it's tail etc. :p ), sometimes considerable, sometimes sad..on yhe other hand, i'd like to add that even the happy scenes makes us feel like we learn unavoidable-may be hard-realities... why don't u experience this extremely impressive diary?? it's on the bookstore,in ur library or just written on the theatre ticket :cool: ..what are u waitin' for??? Learn it and share ur comments with us..... 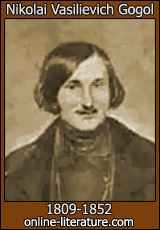 Here is where you find links to related content on this site or other sites, possibly including full books or essays about Nikolai Vasilievich Gogol written by other authors featured on this site.