I was not an industrious student and knew only what I had found by
accident, and I had found "nothing I cared for after Titian--and
Titian I knew chiefly from a copy of 'the supper of Emmaus' in
Dublin--till Blake and the Pre-Raphaelites;" and among my father's
friends were no Pre-Raphaelites. Some indeed had come to Bedford
Park in the enthusiasm of the first building, and others to be
near those that had. There was Todhunter, a well-off man who had
bought my father's pictures while my father was still Pre-
Raphaelite. Once a Dublin doctor he was a poet and a writer of
poetical plays: a tall, sallow, lank, melancholy man, a good
scholar and a good intellect; and with him my father carried on a
warm exasperated friendship, fed I think by old memories and
wasted by quarrels over matters of opinion. Of all the survivors
he was the most dejected, and the least estranged, and I remember
encouraging him, with a sense of worship shared, to buy a very
expensive carpet designed by Morris. He displayed it without
strong liking and would have agreed had there been any to find
fault. If he had liked anything strongly he might have been a
famous man, for a few years later he was to write, under some
casual patriotic impulse, certain excellent verses now in all
Irish anthologies; but with him every book was a new planting and
not a new bud on an old bough. He had I think no peace in himself.
But my father's chief friend was York Powell, a famous Oxford
Professor of history, a broad-built, broad-headed, brown-bearded
man, clothed in heavy blue cloth and looking, but for his glasses
and the dim sight of a student, like some captain in the merchant
service. One often passed with pleasure from Todhunter's company
to that of one who was almost ostentatiously at peace. He cared
nothing for philosophy, nothing for economics, nothing for the
policy of nations, for history, as he saw it, was a memory of men
who were amusing or exciting to think about. He impressed all who
met him & seemed to some a man of genius, but he had not enough
ambition to shape his thought, or conviction to give rhythm to his
style, and remained always a poor writer. I was too full of
unfinished speculations and premature convictions to value rightly
his conversation, in-formed by a vast erudition, which would give
itself to every casual association of speech and company precisely
because he had neither cause nor design. My father, however, found
Powell's concrete narrative manner a necessary completion of his
own; and when I asked him, in a letter many years later, where he
got his philosophy, replied 'From York Powell' and thereon added,
no doubt remembering that Powell was without ideas, 'By looking at
him.' Then there was a good listener, a painter in whose hall hung
a big picture, painted in his student days, of Ulysses sailing
home from the Phaeacian court, an orange and a skin of wine at his
side, blue mountains towering behind; but who lived by drawing
domestic scenes and lovers' meetings for a weekly magazine that
had an immense circulation among the imperfectly educated. To
escape the boredom of work, which he never turned to but under
pressure of necessity, and usually late at night with the
publisher's messenger in the hall, he had half filled his studio
with mechanical toys of his own invention, and perpetually
increased their number. A model railway train at intervals puffed
its way along the walls, passing several railway stations and
signal boxes; and on the floor lay a camp with attacking and
defending soldiers and a fortification that blew up when the
attackers fired a pea through a certain window; while a large
model of a Thames barge hung from the ceiling. Opposite our house
lived an old artist who worked also for the illustrated papers for
a living, but painted landscapes for his pleasure, and of him I
remember nothing except that he had outlived ambition, was a good
listener, and that my father explained his gaunt appearance by his
descent from Pocahontas. If all these men were a little like
becalmed ships, there was certainly one man whose sails were full.
Three or four doors off, on our side of the road, lived a
decorative artist in all the naive confidence of popular ideals
and the public approval. He was our daily comedy. 'I myself and
Sir Frederick Leighton are the greatest decorative artists of the
age,' was among his sayings, & a great lych-gate, bought from some
country church-yard, reared its thatched roof, meant to shelter
bearers and coffin, above the entrance to his front garden, to
show that he at any rate knew nothing of discouragement. In this
fairly numerous company--there were others though no other face
rises before me--my father and York Powell found listeners for a
conversation that had no special loyalties, or antagonisms; while
I could only talk upon set topics, being in the heat of my youth,
and the topics that filled me with excitement were never spoken
of. 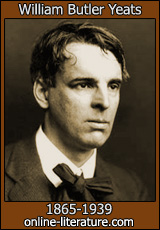