Twenty Thousand Leagues Under The Seas


This story is about the adventures of Captain Nemo and his crew aboard the submarine, Nautilus. One day ships start sinking, particularly ones dealing with war. Survivors think it is a big whale. A harpoon ship goes out to kill it, but finds out that the whale is actually the Nautilus. The most interesting part of this book was probably the Nautilus itself. It is shaped to look like a fish, with a large metal fin on top used to ram and sink the ships. The camouflage of the boat being shaped like a whale works, up until the part where the Nautilus takes on a few passengers from one of the sinking ships. Another intriguing part of this book was Captain Nemo. He is the kind of character that you neither like nor dislike. I say this, because of some of Nemos actions. Captain Nemo hates war, and throughout the book, he uses his submarine to destroy all kinds of war related ships. You would like him for trying to put an end to war, but dislike his method (destroying ships and killing innocent lives).


This is the story of an Underwater Tour of the World and is a classic science fiction novel by French writer Jules Verne published in 1870. It tells the story of Captain Nemo and his submarine Nautilus, as seen from the perspective of Professor Pierre Aronnax after he, his servant Conseil, and Canadian whaler Ned Land wash up on their ship. On the Nautilus, the three embark on a journey which has them going all around the world. The novel was originally serialized from March 1869 through June 1870 in Pierre-Jules Hetzel's periodical, the Magasin dÉducation et de Récréation. The deluxe illustrated edition, published by Hetzel in November 1871, included 111 illustrations by Alphonse de Neuville and Édouard Riou. The book was highly acclaimed when released and still is now; it is regarded as one of the premiere adventure novels and one of Verne's greatest works, along with Around the World in Eighty Days and Journey to the Center of the Earth. The description of Nemo's ship, the Nautilus, was considered ahead of its time, as it accurately describes features on submarines, which at the time were very primitive vessels. Thus, the book has been able to age well because of its scientific theories, unlike some other of Verne's works, like Journey to the Center of the Earth, which are not scientifically accurate and serve more simply as adventure novels.--Submitted by Sana.

Recent Forum Posts on Twenty Thousand Leagues Under The Seas

To my mind, its a quite good example of a science fiction. The beginning was intriguing, the suspense interested me until the first long and detailed scientific description. I realize that the book was written in the epoch when a lot of described things were impossibleIt was a little bit boring. But at the same time, the descriptions of underwater landscapes are beautiful and amazing. The adventures of the main characters are written masterfully. I enjoyed the fantastic details, like navigation under Suez Canal. I would advise to read this book, its interesting and informative.

Something to consider for "20,000 Leagues": Jules Vernes predicted the extinction of the whales as expressed in one of Captain Nemo's tirades. And who was Captain Nemo - he seems to be the vengeful and wise alter ego of the affable and wise Professor Aronnax. Captain Nemo, his crew and the Nautilus are the reincarnation of a whale. Nemo's slain family is likely a whale pod. The Nautilus, impervious to harpoons, is a giant harpoon itself and strikes at the iron ships of the whaling nations.

Can't remember the name of a book

I've been racking my brain all day trying to remember the name of a book that I wanted to read. It was about a submarine that goes into the ocean and discovers atlantis or something along those lines. I think it had a number in the title, like "10 000 below" or something, but I can't remember the exact title. Any help would be appreciated.

Where's the "Temple of Hercules"

At the end of part 2, chapter VII, the book says " I caught a fleeting glimpse of the memorable temple of Hercules, submerged, as we are told by Pliny and Avianus". Does anybody know which temple was that? Haven't found anything about it..

I just read Twenty Thousand Leagues Under the Sea and I really liked it. I kind of got lost in the classifying sometimes, but I loved reading about all the different underwater cultures the Nautilus encountered. The ending left me wanting more. This is the first book I've read by Jules Verne... which one should I read next?

As many of you probably know I started the Animal Farm thread. Now, I ask you the same thing about 20,000 Leagues. It is very boring :redface: so far and I feel he uses to many big words that are not needed:confused: . Help me again to stay away from the Spark Notes. What do you think of the book?"

I thought this book was very interesting throughout except for the long classifying but that can also be interesting depending on where they were. The only thing I did not like was the fact that you had to read another book to see more about captain Nemo(mysterious Island). Overall I rate it as a 9.

This book met all my expectations, which were very high. For a man to vividly describe wonders not even bothered to be researched even by the US Navy. is utterly superb. I see most people do bore with many of the animalia classifications, but isn't that just what the ocean is? I am twenty two years old and haven't read this book for any reason beyond the chase of knowledge, and i must say, i am now a deity compared to what I knew before. The ending was no less magnificent, and only fitting. Maybe one day a author can take up where Verne left off, almost utterly impossible, but how much depths were unexplored, even in the book?

I thought the book was great! A real thought provoker. You actually had to think about what the author is saying instead of just mindlessly reading through. I think it is definitely one of the best books ever written by man.

It's the best book I've ever read. It's very interesting (first few chapters may be a bit borning, anyway). And there are more interesting details ;) 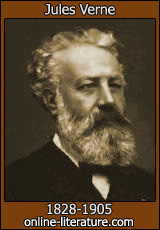