Lectures on Heroes, Hero-Worship, and the Heroic in History


These ideas were influential in the development of Socialism, but  like the opinions of many deep thinkers of the time  are also considered to have influenced the rise of Fascism. Carlyle moved towards his later thinking during the 1840s, leading to a break with many old friends and allies, such as John Stuart Mill and, to a lesser extent, Ralph Waldo Emerson. His belief in the importance of heroic leadership found form in his book On Heroes, Hero-Worship, and the Heroic in History, in which he compares a wide range of different types of heroes, including Odin, Oliver Cromwell, Napoleon, William Shakespeare, Dante, Samuel Johnson, Jean Jacques Rousseau, Robert Burns, John Knox, Martin Luther and the Prophet Muhammad.--Submitted by Anonymous.

Post a New Comment/Question on Heroes and Hero Worship

Here is where you find links to related content on this site or other sites, possibly including full books or essays about Thomas Carlyle written by other authors featured on this site. 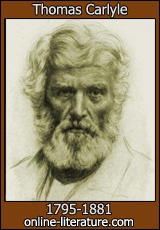