Geneva Grace Stratton was born on 17 August 1863 in rural Wabash County, Indiana. Her father was a Methodist minister, Mark Stratton, her mother Mary Shallenberger. The Strattons were a large family, and young Gene as she was known, took to the surroundings with great joy, exploring the flora and fauna, collecting moths, picking flowers, and raising pet birds. Her idylls were marred by tragedy when her mother died when she was twelve and her brother drowned.

The family then moved to Wabash city, and there Gene suffered a skull fracture. While recuperating she met pharmacist Charles Darwin Porter. They married in 1886 and had one daughter, Jeannette. Once the family had settled in Geneva, Indiana near the adjacent Limberlost Swamp, Porter designed and built the fourteen room "Limberlost Cabin", which is now an Indiana State Historic Site and Bird Sanctuary.

Porter became immersed in her nature studies, earnestly taking to the fields with notepad and pens, drawing sketches, taking notes and photographing. She also started writing poetry and stories. She grew vast gardens of wildflowers and tended her orchards. Many of her articles, stories, and images were published in magazines including Recreation, Outing, and Metropolitan. Song of the Cardinal marked her debut in 1903 as a novelist. It was followed by her highly lauded Freckles (1904). Drawing on her vast collection of material meticulously gathered from nature, her stories weave romance and hardship, adventure, and the solitary solace of nature, together in charming tales with memorable characters. Freckles only has one hand, and Elnora Comstock from A Girl of the Limberlost (1909) has to deal with her loneliness, but in all tales the moral of the story ends in a positive message of hope.

Other Porter works are; At the Foot of the Rainbow (1907), What I Have Done with Birds (1907 non-fiction), The Harvester (1911), Laddie (1913), Michael O'Halloran (1915), and A Daughter of the Land (1918). When the famed swamp was drained, the Porters moved farther north in Indiana and built "The Cabin at Wildflower Woods" which stands on the shore of Sylvan Lake, near Rome City, Indiana and is also a State Historic Site. Adaptations of some of her works were made for the screen and in 1919 Porter moved to Los Angeles, California and formed her own company, the Gene Stratton Porter film company. She died on 6 December 1924 following a streetcar accident. Her remains, along with her daughter's, are buried at her Wildflower Woods home in Rome City, Indiana.

Keeper of the Bees

Ms. Stratton-Porter, you had such a lovely collection of books there, and then you went and ruined it all with "Keeper of the Bees." WHY? There was no reason for this sudden crash of all that was good in your books. For those of you who have read this book, I'm sorry. For those of you have been so fortunate as to never have read it, please don't.... 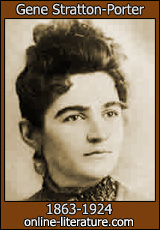 Here is where you find links to related content on this site or other sites, possibly including full books or essays about Gene Stratton-Porter written by other authors featured on this site.