Famous for introducing the character of the vampire Count Dracula, the novel tells the story of Dracula's attempt to move from Transylvania to England so he may find new blood and spread the undead curse, and the battle between Dracula and a small group of men and women led by Professor Abraham Van Helsing. The novel has been assigned to many literary genres including vampire literature, horror fiction, the gothic novel, and invasion literature. The novel touches on themes such as the role of women in Victorian culture, sexual conventions, immigration, colonialism, and post-colonialism. Although Stoker did not invent the vampire, he defined its modern form, and the novel has spawned numerous theatrical, film and television interpretations.

There are too many similar stories/movies based on vampires but Dracula is one of the oldest and most popular ones. Reading a book with such a familiar theme was an interesting experience (I haven't watched the movie based on it). I had certain expectations before starting the book but I was glad to discover that the book had more merits than being yet another vampire story.

I like the story line; the way Count Dracula is introduced and also the fact that it is told through diary entries, newspaper articles and personal letter excerpts, which makes it all more plausible. I also like the fact that the characters are not presented as pure evil ones with the mere aim of spilling blood or ultimate, infallible heroes, who would save the world no matter what. The whole story and characters have a human touch, which makes it an almost touching story.

Having said all this, boy, is Stoker's style verbose! Some hundred pages of the book would have been taken out and nobody would have noticed a thing! I am not sure if this was an attempt on the author's behalf to write a sensational story and still be considered a recognised literary figure but it did not work for me.--Submitted by Anonymous

A houting love story wich stayed with me long after I'd finished.

I can't figure out how Dracula controls Lucy and Renfield before he even sets out from Varna in Russia. How does he even know of their existence? I can just imagine that Jonathan somehow lets slip the name of his fiancee's best friend, but how would he even know of Renfield's existence, let alone be able to control him from a couple of thousand miles away? I'm assuming, of course, that the Lucy's sleepwalking and Renfield's fly- and spider-eating are somehow the result of Dracula's influence? And while we're at it, what's Renfield for, anyway? As far as I can tell, he doesn't play any part in the plot, although he does commune directly with Dracula when he escapes from the asylum to Carfax.

Why is there such a preponderance of Dutch people in this novel? Three out of the novel's eight main characters are Dutch, or at least have Dutch names: Lucy Westenra (the suffix "-a" being specifically Frisian), Mina Harker nee Murray ("Mina" being short for "Wilhelmina", a Dutch name if ever there was one) and of course Professor Abraham van Helsing from Amsterdam. If this novel were real life, you'd just call it a coincidence. But it isn't real life, thank Buddha - it's a novel, and when authors make choices they have reasons for doing it. What was Stoker's?

I am trying to make sense of a passage and would appreciate some help understanding. In the third paragraph into Dr. Seward's Diary, Van Helsing begins to talk about sowing corn to shed light on Lucy's situation... what does he mean? This is a link to the chapter and text I am referring to: http://www.online-literature.com/stoker/dracula/10/ I am understanding this analogy as a "don't count your chickens before they're hatched" type of explanation. Van Helsing doesn't want to say that Lucy will be alright ("will make a good crop when the time comes") unless he can know this for sure through further examination. Am I understanding this passage correctly?? Help.

synthesis essay on dracula and other works?

Maybe it's the wording of my professor's syllabus, but I am totally lost on what to write about. Here is the original text of the prompt: ...I want you to use the tools of psychoanalytical and/or gender criticism to address the surrealistic and/or (pseudo)scientific elements of two (or more) of the films we have recently watched (namely, Cronos, The Cabinet of Dr. Caligari, Dracula: Pages From a Virgin's Diary, Brand Upon the Brain!, Die Farbe, and Vampyr). Please also make reference to Dracula (the novel) as it is relevant to your discussion. I'm having a hard time deciphering what the content of my essay should include. Should I pretend I am a psychologist and analyze the Freudian motives of the characters' actions? That's all I can summise from the prompt and that seems unlikely since this isn't a psychology course. And even if I did choose to write about, let's say, Dracula's embodyment of being stuck at (or not necessarily needing to move on from) an immature stage of psychological development (and how characters in the other works also display similar phenomenon), how could I relate this to surrealistic and/or (pseudo)scientific elements in the work? I just don't see how they mesh... please help :( I at least need to be able to form a topic for tomorrow and I'm so stuck! :( Thanks for reading :)

So I've got some homework for Dracula and I was wondering if someone might be able to help me? The task that was set is quite open so all suggestions are welcome. Basically I'm supposed to pick an object and link it to Dracula. This can be any object, in the present day or in the novel; anything really. An example would be a pencil case, and the objects inside such as a pencil representing the stake used to kill Lucy. I was wondering if someone might have other suggestions for objects? I'm curious as to what people might think to use since I'm not really thinking of anything decent.

Dracula as a Parasite?

Obviously, all vampires are parasitic beings, but what do you think about Dracula's effect on Victorian society?

Hi, everybody... I'm current working on Dracula Project relate to PSYCHOANALYSIS and I have some questions need you guys help. - what are some evidence that Bram Stoker and other authors(in 19th century) were effected by PSYCHOANALYSIS? - what are some evidence from the novel Dracula supporting the concept/idea? Because we just read half the novel so I have some troubles to understand the whole book. If you guys know any websites or info, please help me out, I would appreciate lots.

The Last Voyage of the Demeter

This is a song I wrote inspired by the strange events that happened on the ship that carried Count Dracula to England. It is a classical piece.Begins with violin trying to set the calmness behind the storm and when things start to get weird and dangerous the mood changes accordingly. Tell me what you think. http://www.youtube.com/watch?v=RBydVQijYaQ

I'm into vampire stuff and someone recommended this one to me. I read it and just yelled "This sucks!". And it seriously does! How am I supposed to relate to some stupid 1000 year-old coot? I mean, there wasn't anything good about that!:mad5: 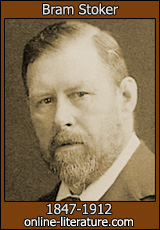