Saint Augustine of Hippo (354-430), bishop and Doctor of the Church is best known for his Confessions (401), his autobiographical account of his conversion. The term augustinianism evolved from his writings that had a profound influence on the church.

Augustine was born at Tagaste (now Algeria) in North Africa on 13 November, 354. His father, Patricius, while holding an official position in the city remained a pagan until converting on his deathbed. His mother, Saint Monica, was a devout Christian. She had had Augustine signed with the cross and enrolled among the catechumens but unable to secure his baptism. Her grief was great when young Augustine fell gravely ill and agreed to be baptised only to withdraw his consent upon recovery, denouncing the Christian faith.

At the encouragement of Monica, his extensive religious education started in the schools of Tagaste (an important part of the Roman Empire) and Madaura until he was sixteen. He was off to Carthage next in 370, but soon fell to the pleasures and excesses of the half pagan citys theatres, licentiousness and decadent socialising with fellow students. After a time he confessed to Monica that he had been living in sin with a woman with whom he had a son in 372, Adeodatus, (which means Gift of God).

Still a student, and with a newfound desire to focus yet again on exploration of his faith, in 373 Augustine became a confirmed Manichaean, much against his mothers wishes. He was enticed by its promise of free philosophy which attracted his intellectual interest in the natural sciences. It did not however erase his moral turmoil of finding his faith. His intellect having attained full maturity, he returned to Tagaste then Carthage to teach rhetoric, being very popular among his students. Now in his thirties, his spiritual journey led him away from Manichaeism after nine years because of disagreement with its cosmology and a disenchanting meeting with the celebrated Manichaean bishop, Faustus of Mileve.

Passing through yet another period of spiritual struggle, Augustine went to Italy in 383, studying Neo-platonic philosophy. Enthralled by his kindness and generous spirit, he became a pupil of Ambrose. At the age of thirty-three, the epiphany and clarity of purpose which Augustine had sought for so long finally came to him in Milan in 386 through a vast stream of tears as he lay prostrate under a fig tree. He was baptised by Ambrose in 387 much to the eternal delight of his mother, ..nothing is far from God. The next event in his life leads to some of the most profound and exquisite writings on love and grief; the death of his mother Monica.

Surrounded by friends, Augustine now returned to his native Tagaste where he devoted himself to the rule in a quasi-monastic life to prayer and studying sacred letters and to finding harmony between the philosophical questions that plagued his mind and his faith in Christianity. He was ordained as priest in 391.

For the next five years Augustines priestly life was fruitful, consisting of administration of church business, tending to the poor, preaching and writing and acting as judge for civil and ecclesiastical cases, always the defender of truth and a compassionate shepherd of souls. At the age of forty-two he then became coadjutor-bishop of Hippo. From 396 till his death in 439, he ruled the diocese alone. At that point the Roman Empire was in disintegration, and at the time of his death the Vandals where at the gates of Hippo. 28 August, 430, in the seventy-sixth year of his age Augustine succumbed to a fatal illness. His relics were translated from Sardinia to Pavia by Luitprand, King of the Lombards. Saint Augustine is often depicted as one of the Four Latin Doctors in many paintings, frescoes and stained glass throughout the world. Unhappy is the soul enslaved by the love of anything that is mortal. Saint Augustine. The cult of Augustine formed swiftly and was widespread. His feast is celebrated on 28 August.

Saint Augustines books, essays and letters of Christian Revelation are probably more influential in the history of thought than any other Christian writer since St. Paul, namely his Confessions, sermons on the Gospel and the Epistle of John, the The Trinity (400-416) and what he finished late in life, the The City of God (426), writings that deal with the opposition between Christianity and the `world' and represents the first Christian philosophy of history. He also wrote of the controversies with Manicheans, Pelagians, and Donatists which helped lead to his ideas on Creation, Grace, the Sacraments and the Church. There is a massive collection of his writings and they also include: Soliloquies (386-387), On Grace and Free Will. (426) Retractions (426-427) and Letters (386-430).

Saint Agustin was probably the best comic of of older logic. He was better than Aristotle and in many ways was superior to Kant. He said that Joseph had to have been a virgin for otherwise god would not have given him his mother for a spouse....

Dear friends, After reading two books by St. Augustine (Confessions and The City of God) and the great biography of him by Peter Brown, Augustine of Hippo (University of California Press, 2000), I think if I were given the chance to go back in history and meet and live in company with any great person, I would choose Augustine of Hippo. He was so human and such a man full of love. After his conversion at the age of 32, he still wanted to live with a community of friends, and every one of them would eat at his table. What conversations they must have had! His insights are so incredibly enlightening! No matter what he talks about in his bo... 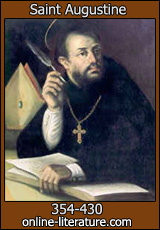 Here is where you find links to related content on this site or other sites, possibly including full books or essays about Saint Augustine written by other authors featured on this site.