Oliver Goldsmith (1730-1774), Irish man of letters, poet, and playwright wrote, The Vicar of Wakefield (1766). Goldsmith stood alone and did not subscribe to nor start any school. He died at forty-six a philosopher at heart, a kind old soul and friend to many including Dr. Samuel Johnson.

Goldsmith was the son of farmer and Irish clergyman to Kilkenny west, Charles Goldsmith, born on 10 November 1730. There is some contradictory information regarding his birthplace but the location noted in his epitaph is Pallas, or Pallasmore, a village near Ballymahon, in county Longford, Ireland. He had five siblings who survived to adulthood.

His education started early at home with a relative, then at age seven he was sent to the village school run by an ex-soldier, Thomas Byrne. Early on he expressed an interest in Celtic music and culture. Young Oliver was shy and reticent, and due to his small and awkward stature and facial scarring from smallpox he without a doubt suffered the consequences from the school bullies. Much to the seeming delight of his headmasters he was at times treated mercilessly for the dunce they told him he was, corporeally used as an example for the other boys on how not to behave. However it is said that even under such harsh circumstances Goldsmith was already writing with such poetics and charm that would later give The Vicar of Wakefield high accolades. He read Ovid, Horace, Livy and Tacitus. In 1774 he entered Trinity College, Dublin, a sizar, paying nothing towards his tuition or food but in return performing menial tasks. His intemperance and tendency to dress in bright colours, play music and gamble got him into trouble numerous times and he would graduate undistinguished; yet his name that he etched onto a windowpane is still preserved.

Goldsmith went on to attempt numerous professions including law and medicine at Edinburgh and Leiden universities, and was turned down for ordination. In 1756 he embarked on travels through France, Germany, Italy and Switzerland; if his fiction, especially The Traveller (1764) is to give any indication of his own life's experiences, it's possible he amused the locals with his flute playing in return for food and lodging and continued his dubious adventures among beggars and thieves. He also took short-term positions before turning to a career in writing while living, among other places, in a tiny room at the top of the `Break-neck Steps' in London. There he produced articles and essays of criticism for various newspapers and magazines including The Bee, The Monthly Review and The Literary Magazine. He also translated Jean Marteilhe of Bergerac's Memoirs. Enquiry into the Present State of Polite Learning in Europe (1759) is one of his more widely known works during this period.

The release of The Citizen of the World (1762), a collection of whimsical and satirical essays, recognized him as a man of letters. His philosophic poem Traveller; or, a Prospect of Society, dedicated to his brother Henry Goldsmith (who died in 1768) was published in 1764. The autobiographical couplets charm in simplistic verse and reflect on many happy memories. It is said that he was paid £21 for it, but it was definitely a success, and generated interest in his previous works. Now becoming settled with his writing and circumstances, Goldsmith took rooms off of Fleet Street in London, then moved to the Temple where he wrote The Vicar of Wakefield (1766). Things were going well with his writing, but he was plagued by tendencies to drink and gamble that would send him off into financial straits. His tale of the country parson is a warm and humorous look at typical English life. While melodramatic, it has an endearing quality of humanity that transcends time and is still in circulation today.

The ironic poem, An Elegy on the Death of a Mad Dog (1766), uses the dog as figure to uphold sensibility and decency in man's society. A remarkable turn in Goldsmith's career was his much welcomed comedic play The Good-Natur'd Man (1768) and the farcical She Stoops to Conquer (1773), which were in sharp contrast to the then popular sentimental dramas of the time and filled the playhouses. He also produced some school texts, and while somewhat misinformed they provided a healthy boost to his income. He also wrote poetry including The Deserted Village (1770).

Though Goldsmith was never blessed with social grace and eloquence, he enjoyed the friendship of, among many others of the literati and social scene of London, Samuel Johnson, who would more than once defend his friend's career and character. He became a member of the `Club' or what was later known as the `The Literary Club' (still existing) in 1764. Joshua Reynolds, painter, and Edmund Burke, author and parliamentarian were other supporters to the end. Goldsmith entertained lavishly and lived beyond his means and while he wore his heart on his sleeve he could never be accused of malice or boastfulness. "I love everything that's old, - old friends, old times, old manners, old books, old wine." In the later years of his life, owing to thousands of £'s worth of debt, his health and spirit were soon affected and he suffered from a nervous fever accompanied by a kidney infection. He sought out Dr James's fever powder as remedy, though it most likely exacerbated his condition. In response to the question on his death bed of whether his mind was at ease, his reply and alleged last words were: "No; it is not".

Oliver Goldsmith died 4 April 1774, in his forty-sixth year and lies buried in the burial ground of the Church of Saint Mary (Middle Temple church yard), London, England. It is said that one of his greatest critics and rivals, Hugh Kelly, attended this humble service, showing great remorse for attacks on Goldsmith's character. The Club placed a cenotaph in his honour at Poet's Corner, Westminster Abbey, London, for which sculptor Joseph Nollekens created a bust in medallion of the poet's profile in relief, and the Latin epitaph written by his friend Samuel Johnson stands below it:

A Poet, Naturalist, and Historian,
Who left scarcely any style of writing untouched,
And touched nothing that he did not adorn;
Of all the passions,
Whether smiles were to be moved or tears,
A powerful yet gentle master;
In genius, sublime, vivid, versatile,
In style, elevated, clear, elegant—
The love of companions,
The fidelity of friends,
And the veneration of readers,
Have by this monument honored the memory.

"Our greatest glory consists not in never failing, but in rising every time we fall."~ Oliver Goldsmith 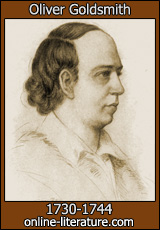 Here is where you find links to related content on this site or other sites, possibly including full books or essays about Oliver Goldsmith written by other authors featured on this site.