Moby Dick is now considered one of the greatest novels in the English language and has secured Melville's place among America's greatest writers. Written in 1851, it is the story of Ishmaels whaling voyage. It contains many examples of alliteration, allusion, similes, and metaphors; it also presents an ironic argument against Transcendentalism and the power of man. This book contains reflections of Melvilles own whaling voyages and many collections of compiled whaling knowledge: the history of whaling, scientific whale groups, usage of whaling tools, etc. Altogether this book is a literary masterpiece. --Submitted by Anonymous

You may think that you know the story of Moby Dick, but until you have read this book, you cannot understand its power. The power comes from the rich descriptions of whalers, those who worked the ships, the history of whaling, the knowledge of whales, and how in the 19th century they were so crudely hunted and butchered on the open seas. Danger in many forms lurks throughout this book, long before we even hear about Moby Dick or Captain Ahab, but these dangers merely set the stage for the cataclysm to come. Just who is this Ishmael? Surely not just some simple merchant mariner looking for a new experience on a whaling ship. It may not make sense that a simple seaman such as he can be someone who seems historian, biologist, journalist, psychologist, and even well-taught in classical literature. In the end he is our window to this incredible adventure, which we experience as vividly as if we were there ourselves.--Submitted by Gregory Pittman.

Who did you want to win?

I looked up spermaceti, the high quality oil the whalers extract from the heads of sperm whales. I was surprised by just how much of the whale was made up of the stuff. 9773 Wikipedia says there are two theories about what it is for. The first is that it is used in echo location. Spermaceti has a higher speed of sound than water, but I don't know how that helps. In one of Melville's chapters on cetology, he talks about the whales' eyes being so far on either side of its head, that it must make forward vision rather difficult. I think he mentions the whales' ears. IIRC he says he does not think they have a sense of smell, or maybe just no nostrils. He does not seem to know about whale sonar. When I read about the harpooners blinding the whales, I thought: poor things, even if they survive the hunt they will starve and die. However, maybe they do not actually need their eyesight that much. Their eyes are relatively small while their echo location organs are huge. Wikipedia's other theory is that the spermaceti is used for buoyancy control. By heating or cooling it, they can change its density. Counting against the theory is research that the whales do not have the biological apparatus to perform the heat exchange, and that the change of density is too low to make much of a change to buoyancy until the organ gets to a very large size. However, spermaceti would appear to be a phase change material at useful temperature. It melts and solidifies between 25°C and 35°C/ 77°C to 95°F. I am not saying we definitely should resume hunting sperm whales so we can use their spermaceti in high efficiency central heating systems; I am just airing the possibility for discussion :reddevil:

The Pequod is not a military ship.Their voyage is a purely mercantile venture. So what would be the penalties if Mr Starbuck and the crew did mutiny against Captain Ahab? What if the three mates said they arrested him and put him in the brig because of his pottiness? Presumably, they can't be keelhauled or flogged because they are not a naval crew. So what would happen?

Was Melville alluding to wars with Native Americans in Moby Dick?

Maybe this is not a very original observation. In chapter 87, The Grand Armada, The Pequod and its crew come across a mass of whales. There's a sort of circle of them, inside of which there are mother whales with their babies. It seems like the whales on the perimeter are trying to protect the more vulnerable whales in the centre. I believe other herd animals do this as well, but it seems rather human. Captain Ahab believes Moby Dick has a malign cunning, that his actions are deliberate, that he is not just thrashing about. In another chapter Ahab meets the captain of an English whaler, who lost his arm to Moby Dick. The captain tells Ahab that Moby Dick bit through a harpoon line that had been launched at another whale, as if Moby Dick had tried to save that whale. Captain Ahab thinks so. In that case, if Ahab believes Sperm Whales to be intelligent creatures, who live in communities and look after each other, doesn't that make what they are doing pretty close to murder? They certainly don't doubt their method of hunting the animals is very cruel. I wonder whether Melville was thinking about what the white settlers had been doing to Native Americans. There you had a people who might have seemed rather alien with different beliefs, language and culture. Some Native Americans may have behaved very violently and made themselves feared and hated, but from their point of view they were defending themselves against aggresors. I looked up 'Pequod'. According to Wikipedia, they were a Native American tribe who were wiped out in a war with white settlers and other Native American tribes. Maybe it is not a fair analogy because the white settlers in New England did actually have talks with the local Native Americans, and sometimes made alliances with them, where as we still cannot talk to whales.

Were the mates superfluous in the whale boats?

I was a little surprised whaling crew seemed a bit more tolerant of difference than I expected for the time and place. The crew is multi-racial. Next to the captain and the 1st, 2nd and 3rd mates, the next highest ranking crew were the harpooners. One was a Native American, one was a West African and one was a New Zealand Maori. In one chapter, Melville criticizes the way the boats go after the whales. The harpooner is expected to row like mad with the other four rowers while the mate steers the boat. When they close in with the whale, the harpooner has to stop rowing, get up and throw his harpoon at the whale. Then he changes places with the mate and the mate finishes off the whale by repeatedly stabbing it with a lance. Melville thought this was inefficient as the harpooners often missed because they were exhausted from rowing. He thought the harpooner should not have to row, but that after throwing his harpoon at the whale, should proceed to finish it off with the lance. I wonder if the reason they did not do this is because it would transfer too much status from the mates to the harpooners, who were, after all, just savages, recruited from around the world for their ability to throw a spear with great power and accuracy. You cannot have two crew members out of six not rowing, and what would you need the mate for? Maybe it was not a question of racism, more the officers seeking to protect their own prestige.

Who's in the crew?

Hi, I read this book some time ago and am trying to find this quote which had the following idea: Those who are a carrier of hate to pour it unto something else are consumed themselves by the hate without realizing it. Those aren't the exact words Melville used but that was the general idea of the quote. Could someone familiar with the book please reference me this quote? Thanks in advance. Alvaro

I'm about fifty pages into Moby Dick. Queequeg has been introduce and Ishamel is in the whalers chapel. It is a very strange book. Is this a common reaction?

Anyone know the source of this reading?

The start of this music has a reading from the intro of Moby Dick. http://www.youtube.com/watch?v=1PSi02hbqyE I like the way it's read very much, more than the eBooks I've heard, so I am hoping it might be from a publicly known/available source. Please check and let me know if you can identify it. Thanks!

As I'm re-reading Moby Dick, I have formed ipinion about the novel, and that opinion is that it's the greatest piece of American literature that I've ever read. It's so dense, so beautiful, so dark, so funny . . . just so great. So, what do you think?

Here is where you find links to related content on this site or other sites, possibly including full books or essays about Herman Melville written by other authors featured on this site. 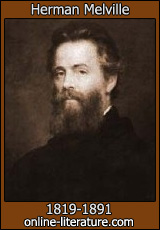