Mary Hallock Foote (1847-1938), American author and illustrator wrote numerous novels and short story collections of the American West, including The Desert and the Sown (1902);

It was an evening of sudden mildness following a dry October gale. The colonel had miscalculated the temperature by one log--only one, he declared, but that had proved a pitchy one, and the chimney bellowed with flame. From end to end the room was alight with it, as if the stored-up energies of a whole pine-tree had been sacrificed in the consumption of that four-foot stick.
The young persons of the house had escaped, laughing, into the fresh night air, but the colonel was hemmed in on every side; deserted by his daughter, mocked by the work of his own hands, and torn between the duties of a host and the host's helpless craving for his after-dinner cigar.--Chapter 1

A Victorian Gentlewoman in the Far West: The Reminiscences of Mary Hallock Foote (posthumous, 1972) is Foote's memoir of her travels and life as wife, mother, author, and illustrator, raised with the values and morals of the genteel upper class of the American East Coast, confronted with the frontier and pioneering spirit of the American West. In it she also tells of her aunt Sarah H. Hallock, anti-slavery and women's rights activist, who often had many influential visitors to the Hallock family residence when Mary was young. Mary herself did not mature to fully embrace such movements as women's suffrage, as suggested in a letter she wrote Susan B. Stockham M.D. on 15 August, 1887, but that she merely wanted her works to be considered at face value, not marketed specifically as "woman's work".

Mary Anna Hallock was born on 19 November, 1847, on the farm of her Quaker parents Nathaniel Hallock and Ann Burling. Their farmhouse on the Hudson River in Milton, New York State, was a hub of activity whilst Mary was growing up. Her education started at a Quaker school. She then went on to the Poughkeepsie Female Collegiate Seminary in New York State. Mary then moved to New York City to attend the Cooper School of Design where she excelled in fine art. It was not soon after that her woodcut illustrations were gracing the pages of many popular books of the day including her own.

In 1876 Mary married mining engineer Arthur De Wint Foote (1849-1933), with whom she would have a son, Arthur (b.1877), and daughters Elizabeth Betty (b.1882) and Agnes (b.1886-d.1904). "No girl ever wanted less to 'go West' with any man, or paid a man a greater compliment by doing so." -- from A Victorian Gentlewoman in the Far West: The Reminiscences of Mary Hallock Foote. While Mary was well-attached to her close-knit family and sophisticated lifestyle, she reluctantly left the east with Arthur and travelled west to the states of California, Colorado, and Mexico where they lived in a number of mining towns. Mary adjusted by immersing herself in the study of the regions and peoples, writing short sketches, essays, and stories. A number of them appeared in the pages of The Century and the Atlantic Monthly magazines to an appreciative audience. Her first novel The Led-Horse Claim: A Romance of a Mining Camp appeared in 1883. One year later the Foote's settled in Boise, Idaho. Arthur designed and built Canyon House, their massive wood and stone home on the shores of the Boise River. It was the Foote's residence for the next twelve years. Mary quickly set up her desk to continue her writing and illustration work. Through her writing and drawings she soon developed her gift of portraying authentic depictions of community life in the mining camps. She gleaned material from her innovative husband and his team who were designing irrigation systems for the Boise River Irrigation Project. It was completed in 1909.

Adding an element of romance, Mary's characters, not unlike her own experience, also deal with the hardships and challenges of settling in a sometimes harsh and isolating world. John Bodewin's Testimony (1886) was followed by The Last Assembly Ball (1889) but it was not until The Chosen Valley (1892) that she was fully recognized as a successful author back East. In Exile and Other Stories (1894) was followed by her admittedly pot-boiler Coeur d'Alene (1894). The Foote's suffered some lean years whilst Arthur continued to seek long-term employment; Mary's royalties were the only thing sustaining them for a while. In 1896 they moved to Grass Valley, Nevada County, California, which Foote's semi-autobiographical The Valley Road (1915) is based on.

Near Grass Valley, Arthur, now Superintendant of the North Star Gold Mine, commissioned the building of their new 10,000 square foot home, North Star House or Foote Mansion, also made of massive wood and stone. In their home shaded by large Ponderosa pines, Mary continued to write. The Foote home became a bustling social destination and Mary was active in many community social projects. The Prodigal (1900) was followed by A Touch of Sun and other Stories (1903). The Foote's daughter Agnes died in 1904, sending Mary into a long period of grief. She emerged from her troubles with the publication of her historical romance about the American Revolution, The Royal Americans (1910). Her novel A Picked Company (1912) is set in the 1840s. The Valley Road was published in 1915. In honour of the memory of her daughter Agnes, Mary wrote The Ground Swell (1919). 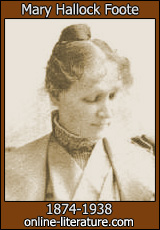 Here is where you find links to related content on this site or other sites, possibly including full books or essays about Mary Hallock Foote written by other authors featured on this site.