A thrilling epic of a sea voyage and a complex novel of ideas, a standard-bearer of its genre. This is the vivid story of a gentleman scholar, Humphrey Van Weyden, who is rescued by a seal-hunting schooner after a ferryboat accident in San Francisco Bay. London uses Van Weyden's ordeal at the hands of a schooner's devious crew to explore powerful themes of ambition, courage, and the innate will to survive. The Sea-Wolf also introduces Jack London's most memorable, fully realized character, Wolf Larsen, the schooner's brutal captain, who ruthlessly crushes anyone standing in his way. Powerful conflict of opinion on life... A touch of different worlds...--Submitted by Alexander


The Sea-Wolf is a tale of life under pressure; set across the great oceans, and will carry you on a voyage under the terrible circumstances of the weak young man pressed into service on the ship of a tyrannical monster: Wolf Larsen, the Sea-Wolf. The protagonist Humphrey Van Weyden becomes trapped and beleaguered as he faces off with the crushingly physical conditions around him, the cold-- the cynical philosophy of the ship's captain, and the voyage of discovery brought about by pure struggle. This book presents a multi-layered texture that speaks of suffering, the will to live, and the terrible strength of those who hate. A thought-provoking philosophical and psychological journey. Irony in no short supply.--Submitted by comingaflame

London and Spencer in the Sea Wolf

I started reading this, because it filled two criterion: it would be pre-1914 reading, but would not seem like homework (as I was going on holiday). I was not surprised to see that it was written after The People of the Abyss, which was a bit of reportage written during 1902 about living conditions in London's East End. The character of Cookie was evidence of that. I was surprised to learn that Jack London had served on a seal whaler ship in his youth. To me, Wolf Larson seems like an epitome of Jack London's creed. He is a man of action, yet a man of learning. He mentions reading Darwin and Spencer, and I think this is where it gets a bit dodgy. I don't honestly know a lot about Herbert Spencer. He was big in the C19th. I think he extrapolated Darwin's theories on evolution to human evolution, in a way which social scientists of today would disapprove. I don't know, but I suspect his theories were a bit racist and that he approved of Eugenics, and I have read this criticism of Jack London too. Still, it was a subject that a lot of people were thinking about at the time. Jack London was still a unique writer: a lad, an adventurer, yet still a big brain and a talented writer.

I need to create a drawing of the Ghost. If anyone would happen to have an accurate picture, or some dimensions, thatd be great. :ladysman:

I thought this book was very interesting. I had to read this book for an assignment for school. I admit, at the beginning I thought that book was pretty dull and slow. Around chapters 6 and 7 I became more interested in the book. There was more action and more happening. I enjoyed the talks that Humphrey and Wolf Larsen had, because they made you think about life and consider what they were saying. In some ways you could relate to what they were saying, especially Wolf in about fighting to survive. In addition, I enjoyed the romance part, because I was hoping that Humphrey and Maud would become more then friends. Jxz074 William Mulholland Middle School Student

Well i actually think this book is interesting..At first the first six chapters were boring i had trouble reading and not falling asleep.Now i actually enjoy reading.I know most of the pple in my class dont enjoy reading this book as much as i do..I really like chpter 11 were they talk about Omar and the bible. dats were i started falling i love wit this book..Just the way humphrey and wolf larsen talk about it makes me love it... IXC088 MULHOLLAND MIDDLE SCHOOL STUDENT

In the early chapters the narrator implies that Wolf Larsen was quite attractive to women, that they would forget about morals and succumb to his charms. His romantic history is not mentioned in great detail. I keep wondering what kind of women Larsen would consider having sexual relationships with. He doesn't seem like the type who would pay for sex with a prostitute. What kind of women were available to him? Obviously, women like Maud Brewster were a bit out of reach for him.

This is a truly thrilling book and provokes deep contraversy. I've read many books but none have made me thing so hard and question my own beleifes as much as this one. Its a great story and i've always admired London's work but before this book never truly realized this authors full potential. In conclusion this book is a must read for anyone who is pondering the more, dear i say, "real" meanings to life.

this book sucks! Dont read it! i chose this book for a report in which i needed to make connections in his writing with his life. It has a few connenctions which was good, but it bored me from the start i needed to try REALLY hard to get past chapter 5. there were some interesting points and good character development, but unless you really like the sea there are so many parts that are impossibly hard to read due to extreme boredom!

hello,,,i heard that this story whas i 7 films is that true,and in that case witsh films,,,sorry about the spelling,,,,,_---Daniel

I think Hump is so cute the way he's so feminine like. But, his romantic side is the thing that really attracts me to this character. Although, Wolf Larsen (as said in the book) was made well by god and I probably wouldn't care if he was such a jerk, I think I'd like him.

This book is a stellar example of the duality of man. The raging conflict between the "Wolf" and "Hump" show the two extremes of humanity. It also makes one pause and consider his own soft life compared to one on the open sea. The "Wolf" has set himself up as a near god in the way he manipulates the lives of the men who serve under him. This causes one to relate this story to our own "masters" in our lives.
To the persons who found this incredible saga "boring", I leave you with the following. On a whim, I began to read "The Sea Wolf" to my four year old son. After one chapter' I thought he would lose interest. To my suprise he had me read four more chapters before drifting off to sleep. No doubt sailing the high seas in his dreams.

Here is where you find links to related content on this site or other sites, possibly including full books or essays about Jack London written by other authors featured on this site. 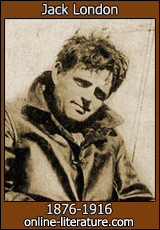