Early in 1818 John Hamilton Reynolds, a friend of Keats, sent him two sonnets which he had written 'On Robin Hood'. Keats, in his letter of thanks, after giving an appreciation of Reynolds's production, says: 'In return for your Dish of Filberts, I have gathered a few Catkins, I hope they'll look pretty.' Then follow these lines, entitled, 'To J. H. R. in answer to his Robin Hood sonnets.' At the end he writes: 'I hope you will like them--they are at least written in the spirit of outlawry.'

Robin Hood, the outlaw, was a popular hero of the Middle Ages. He was a great poacher of deer, brave, chivalrous, generous, full of fun, and absolutely without respect for law and order. He robbed the rich to give to the poor, and waged ceaseless war against the wealthy prelates of the church. Indeed, of his endless practical jokes, the majority were played upon sheriffs and bishops. He lived, with his 'merry men', in Sherwood Forest, where a hollow tree, said to be his 'larder', is still shown.

Innumerable ballads telling of his exploits were composed, the first reference to which is in the second edition of Langland's Piers Plowman, c. 1377. Many of these ballads still survive, but in all these traditions it is quite impossible to disentangle fact from fiction.

No, the bugle sounds no more, And the twanging bow no more; Silent is the ivory shrill Past the heath and up the hill; There is no mid-forest laugh, Where lone Echo gives the half To some wight, amaz'd to hear Jesting, deep in forest drear.

On the fairest time of June You may go, with sun or moon, 20 Or the seven stars to light you, Or the polar ray to right you; But you never may behold Little John, or Robin bold; Never one, of all the clan, Thrumming on an empty can Some old hunting ditty, while He doth his green way beguile To fair hostess Merriment, Down beside the pasture Trent; 30 For he left the merry tale Messenger for spicy ale.

Gone, the merry morris din; Gone, the song of Gamelyn; Gone, the tough-belted outlaw Idling in the "grenè shawe;" All are gone away and past! And if Robin should be cast Sudden from his turfed grave, And if Marian should have 40 Once again her forest days, She would weep, and he would craze: He would swear, for all his oaks, Fall'n beneath the dockyard strokes, Have rotted on the briny seas; She would weep that her wild bees Sang not to her--strange! that honey Can't be got without hard money! 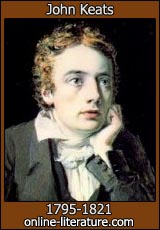