A Play in Three Acts

James Joyce published only one play, Exiles. He started writing it shortly after the outbreak of the First World War in 1914 and published it in 1918. A study of a husband and wife relationship, the play looks back to "The Dead" (the final story in Dubliners) and forward to Ulysses, which Joyce began writing around the same time he was writing Exiles. It is said that the play was rejected by William Butler Yeats for production by the Abbey Theatre. Its first major London performance was in 1970, when Harold Pinter directed it at the Mermaid Theatre. Joyce himself described the structure of the play as "three cat and mouse acts". The play follows four players and two couples, Richard Rowan, a writer and his "common-law wife" Bertha, and Robert Hand with his cousin and previous lover Beatrice, both old friends of the previous couple.

Only a red theatrocrat with no findlestilts would like this trashy tumblerbunk. This druriodrama is is doyne in its joyicity. perhaps Television kils telephony in brother's broil. The

Here is where you find links to related content on this site or other sites, possibly including full books or essays about James Joyce written by other authors featured on this site. 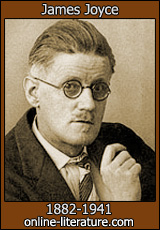