The Belfry Of Bruges

In the market-place of Bruges stands the belfry old and brown;
Thrice consumed and thrice rebuilded, still it watches o'er the
town.

As the summer morn was breaking, on that lofty tower I stood,
And the world threw off the darkness, like the weeds of
widowhood.

Thick with towns and hamlets studded, and with streams and vapors
gray,
Like a shield embossed with silver, round and vast the landscape
lay.

At my feet the city slumbered. From its chimneys, here and
there,
Wreaths of snow-white smoke, ascending, vanished, ghost-like,
into air.

Not a sound rose from the city at that early morning hour,
But I heard a heart of iron beating in the ancient tower.

From their nests beneath the rafters sang the swallows wild and
high;
And the world, beneath me sleeping, seemed more distant than the
sky.

Then most musical and solemn, bringing back the olden times,
With their strange, unearthly changes rang the melancholy chimes,

Like the psalms from some old cloister, when the nuns sing in the
choir;
And the great bell tolled among them, like the chanting of a
friar.

Visions of the days departed, shadowy phantoms filled my brain;
They who live in history only seemed to walk the earth again;

I beheld the pageants splendid that adorned those days of old;
Stately dames, like queens attended, knights who bore the Fleece
of Gold

I beheld proud Maximilian, kneeling humbly on the ground;
I beheld the gentle Mary, hunting with her hawk and hound;

And her lighted bridal-chamber, where a duke slept with the
queen,
And the armed guard around them, and the sword unsheathed
between.

I beheld the Flemish weavers, with Namur and Juliers bold,
Marching homeward from the bloody battle of the Spurs of Gold;

Till the bell of Ghent responded o'er lagoon and dike of sand,
"I am Roland! I am Roland! there is victory in the land!"

Then the sound of drums aroused me. The awakened city's roar
Chased the phantoms I had summoned back into their graves once
more.

Hours had passed away like minutes; and, before I was aware,
Lo! the shadow of the belfry crossed the sun-illumined square. 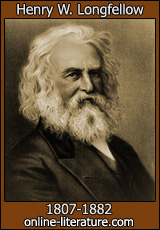