Henry Blake Fuller was born on 9 January 1857 in Chicago, Illinois. His mother was Mary Josephine Sanford (d.1907) and his father, George Wood Fuller (d.1885), was a banker and worked as an executive with the railroad. In direct descent of Dr. Samuel Fuller who had arrived on the Mayflower, young Henry was born and raised in Chicago from a long line of the area's influential businessmen and leaders, though he himself would not follow in his father's footsteps. Attending schools in Chicago and Wisconsin, he developed a love of the arts and architecture, which soon saw him on numerous travels throughout Europe, his first "wander-jahr" in 1879.

Fuller's European travel romances evolved into fictional depictions of life in the American Midwest. Around the age of fourteen he had started keeping a journal, "Allisonian Classical Academy", expressing his desire to excel in the use of English and word painting. The Henry B. Fuller Collection at Newberry Library in Chicago now houses the single most extensive repository of his assiduously kept journals, correspondence, and manuscripts. Fuller's first European adventure was in England, whereupon some of his letters home were published in the Chicago Tribune. After his father died in 1885 he was involved with the management of family business, though he continued to write essays and short stories, and also tried his hand at poetry and operas.

Hamlin Garland became a life-long friend of Fuller's, and in his book Roadside Meetings we get a clear description of the mature Fuller: a self-assured, well-spoken, well-travelled gentleman with little patience for pretensions and swagger, with a seeming love-hate relationship between his native city's economic priorities, and the emphasis on arts and culture in Europe. In his first two novels, based on his travels to Italy in 1880, 1883, and 1886, The Chevalier of Pensieri-Vani (1890) and The Chatelaine of La Trinité (1892), we see veiled comparisons between corporate industrialist Chicago and the timeless beauty of Italy. His knowledge and love of music, architecture, and literature earned him high acclaim for his first efforts.

The Cliff-Dwellers (1893), Fuller's self-confessed "first essay in `realism'" followed with his now thematic anti-big business prejudice, sardonically suggesting that young men pursue careers similar to his father's. It is an urban story based on the daily lives of employees at the Clifton, an eighteen story downtown Chicago office building, no doubt in part inspired by his own experiences dealing with the business affairs of his late father. The hero George Ogden himself lives his life single-mindedly to battle the villain itself: Chicago, home of the skyscraper.

With the Procession (1895) contains even more harsh criticism, though Fuller tempers his delivery with well-crafted wit and satire. Jane Marshall, with all her well-meaning yet spiritually bereft aspirations is merely another victim of social climbing. It details the demise of those who fail to keep up with economic advances and progression following the boom in Chicago after the fire in 1871. It was followed by the less successful From the Other Side (1898) and The Last Refuge (1900). The New Flag (1900) was his anti-imperialist criticism of President McKinley and the Spanish American War. It was followed by his satirical Under the Skylights (1901), and a number of his reviews, essays, and articles published in the newspapers Chicago Evening Post, the Chicago Record Herald and the New York Times.

After his mother's death in 1907, Fuller took to living in a succession of rooming houses, often revelling in his privacy, though he was guest at many parties. He was acquainted with many of the architects, painters, sculptors, actors, musicians, and writers of Chicago's social club called "The Little Room" which met on Friday afternoons. His autobiographical On the Stairs was published in 1918. Bertram Cope's Year (1919) followed, deemed to be one of the first American works to deal with homosexual material. While he had finally mellowed in his criticism of his birthplace, Fuller made his last journey to Europe in 1924. Gardens of This World (1929) was his last publication. Henry Blake Fuller died on 28 July 1929 in Chicago.

Forum Discussions on Henry B. Fuller 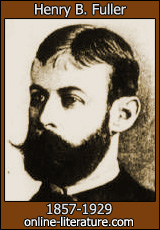 Related links for Henry B. Fuller

Here is where you find links to related content on this site or other sites, possibly including full books or essays about Henry B. Fuller written by other authors featured on this site.