This volume is intended as a companion to the historical sketch of English literature, entitled From Chaucer to Tennyson, published last year for the Chautauqua Circle. In writing it I have followed the same plan, aiming to present the subject in a sort of continuous essay rather than in the form of a "primer" or elementary manual. I have not undertaken to describe, or even to mention, every American author or book of importance, but only those which seemed to me of most significance. Nevertheless I believe that the sketch contains enough detail to make it of some use as a guide-book to our literature. Though meant to be mainly a history of American belles-lettres, it makes some mention of historical and political writings, but hardly any of philosophical, scientific, and technical works.

A chronological rather than a topical order has been followed, although the fact that our best literature is of recent growth has made it impossible to adhere as closely to a chronological plan as in the English sketch. In the reading courses appended to the different chapters I have named a few of the most important authorities in American literary history, such as Duyckinck, Tyler, Stedman, and Richardson. My thanks are due to the authors and publishers who have kindly allowed me the use of copyrighted matter for the appendix, especially to Mr. Park Godwin and Messrs. D. Appleton & Co. for the passages from Bryant; to Messrs. A. O. Armstrong & Son for the selections from Poe; to the Rev. E. E. Hale and Messrs. Roberts Brothers for the extract from The Man Without a Country; to Walt Whitman for his two poems; and to Mr. Clemens and the American Publishing Co. for the passage from The Jumping Frog. 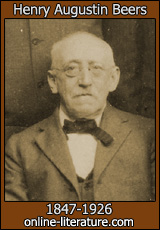