The butterfly wished to procure a bride for himself--of course, one of the flowers--a pretty little one. He looked about him. Each one sat quietly and thoughtfully on her stalk, as a young maiden should sit, when she is not affianced; but there were many of them, and it was a difficult matter to choose amongst them. The butterfly could not make up his mind; so he flew to the daisy. The French call her Marguerite; they know that she can tell fortunes, and she does this when lovers pluck off leaf after leaf and ask her at each one a question about the beloved one: "How does he love me?--With all his heart?--With sorrow?--Above all?--Can not refrain from it?--Quite secretly?--A little bit?--Not at all?"--or questions to the same import. Each one asks in his own language. The butterfly flew towards her and questioned her; he did not pluck off the leaves, but kissed each separate one, thinking that by so doing, he would make himself more agreeable to the good creature.

"Sweet Margaret Daisy," said he, "of all the flowers you are the wisest woman! You can prophesy! Tell me, shall I obtain this one or that one? Which one? If I but know this, I can fly to the charming one at once, and pay my court!"

He asked again, he asked a third time, but as she did not answer a single word, he questioned her no more and flew away without further parley, intent on his courtship.

It was early spring time, and there was an abundance of snow-drops and crocuses. "They are very neat," said the butterfly, "pretty little confirmed ones, but a little green!" He, like all young men looked at older girls.

From thence he flew to the anemones; but he found them a little too sentimental; the tulips, too showy; the broom, not of a good family; the linden blossoms, too small--then they had so many relations; as to the apple blossoms, why to look at them you would think them as healthy as roses, but to-day they blossom and to-morrow, if the wind blows, they drop off; a marriage with them would be too short. The pea blossom pleased him most, she was pink and white, she was pure and refined and belonged to the housewifely girls that look well, and still can make themselves useful in the kitchen. He had almost concluded to make love to her, when he saw hanging near to her, a pea-pod with its white blossom. "Who is that?" asked he. "That is my sister," said the pea blossom.

"How now, is that the way you look when older?" This terrified the butterfly and he flew away.

The honeysuckles were hanging over the fence--young ladies with long faces and yellow skins--but he did not fancy their style of beauty. Yes, but which did he like? Ask him!

The spring passed, the summer passed, and then came the autumn. The flowers appeared in their most beautiful dresses, but of what avail was this? The butterfly's fresh youthful feelings had vanished. In old age, the heart longs for fragrance, and dahlias and gillyflowers are scentless. So the butterfly flew to the mint. "She has no flower at all, but she is herself a flower, for she is fragrant from head to foot and each leaf is filled with perfume. I shall take her!"

But the mint stood stiff and still, and at last said: "Friendship--but nothing more! I am old and you are old! We can live very well for one another, but to marry? No! Do not let us make fools of ourselves in our old age."

So the butterfly obtained no one.

The butterfly remained a bachelor.

Many violent and transient showers came late in the autumn; the wind blew so coldly down the back of the old willow trees, that it cracked within them. It did not do to fly about in summer garments, for even love itself would then grow cold. The butterfly however preferred not to fly out at all; he had by chance entered a door-way, and there was fire in the stove--yes, it was just as warm there, as in summer-time;--there he could live. "Life is not enough," said he, "one must have sunshine, liberty and a little flower!"

He flew against the window-panes, was seen, was run through by a pin and placed in a curiosity-box; one could not do more for him.

"Now I also am seated on a stalk like a flower," said the butterfly, "it is not so comfortable after all! But it is as well as being married, for then one is tied down!" He consoled himself with this.

"What a wretched consolation!" said the flower, that grew in the pot in the room.

"One can not entirely trust to flowers that grow in pots," thought the butterfly, "they have too much intercourse with men." 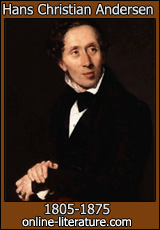