Eliots view of human nature is complex. She does not preach, and she does not offer flat characters with whom it is impossible to sympathize. Instead, she offers real characters, whose motivations are sympathetic even when the motivations are tainted. Throughout the Adam Bede novel, assessments against another persons negative actions are a condemning aim of the novel, e.g., Adam is at times able to see his own failings but is frustrated in attempts to correct them. Eliot contrasts the inner and outer beauty of the characters by portraying that external beauty may be more recognizable and superficially preferred to inner beauty, but it obviously is not the most desirable. This is made clear with Hettys lack of individual goodness; she is the more physically beautiful and those around her are often fooled or blinded by her appealing looksHettys true personality is that of inner ugliness. Adam, however, wrongly assumes she is a good person because of her appearance. The contrasting feelings for Dinah are more real because of being drawn in not only by beauty, but more importantly, by her inner character. Interestingly, at a party, the vain Hetty flirts with Adam because she knows Mary Burge, who loves Adam, is watching them; Hetty is actually only interested with the flashy Captain Donnithorne. Adam is miserable at the thought that she might have the Captain as a secret lover. At this coming-of age-party it brings into sharp focus the class questions that permeates life in Hayslope. The party also displays the main characters in their moments of innocence. Hettys eventual disgrace will shock the world of HayslopeIll let you figure it out.

Eliot continually discredits those members of the artificial nobility who deride the simple pleasures of the lower classes. The party gathering is a microcosm of everything distasteful about class prejudice; however, the empathy of the novel lies with the common people. In fact, the narrator encourages people to enjoy lifes simpler pleasures and not turn their noses up at characters or people just because they are of a lower class. Eliot is concerned and bothered with the many obvious external phoniness that presents appearances without substance or significance; she contrasts this shallowness with the individuals lack of inner virtues that penetrate below the surface. Human nature is seen as a quintessence of the world or the universe. We are not all alike!

Hello! If you read Adam Bede you know that, from the beginning, Seth is in love with Dinah, and wants to marry her. She refuses him all the time. Later on we learn that Dinah is in love with Adam and he suddenly realises that he feels the same way for her. Adam is uneasy because he knows his brother loves her. But when he tells Seth about his feelings, Seth not only accepts it, but tells Adam that he will be very glad if Dinah agrees to marry him. When I read the book this response from Seth struck me as odd. How could he change his feelings so quickly? Wasn't he so deeply in love with Dinah, after all? Or his religious and spiritual feelings of abnegation were stronger than his love? Or were his selflessness and his love for Adam greater than his feelings for Dinah? Or...? What do you think?

I almost finished the book and was wondering if i missed something about whose baby it was that hetty had killed, if it was hers then how was there no warning or who was the father.

I had just finished ADAM BEDE.It's a nice novel but one thing about which i am not satisfied is Hetty's story as there is no clear reference about her death or whatever happened to her Or may be i had missed it somewhere.Can anyone tell me?What happened to Hetty Sorrel after her hard-won release from death clutches(as she was to be hanged till death for murdering her own child)?

Iam yet to go through this epoch making literary work of george eliot.The only material i have skimmed through prior to this is the viewpoints of VIRGINIA WOOLF on elliot.There is no iota of doubt that virginia woolf, though known for her idiosyncrasies,by far considered to be in the top rung amongst the literary stalwarts.Hence my contention about elliot would be that she must be a discreet writer with her fascinating flow of thoughts indited into novels.My further comments will be following after i finish reading ADAM BEDE.

Here is where you find links to related content on this site or other sites, possibly including full books or essays about George Eliot written by other authors featured on this site. 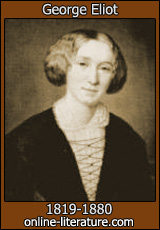