This book contains a life of Columbus, written with the hope of interesting all classes of readers.

His life has often been written, and it has sometimes been well written. The great book of our countryman, Washington Irving, is a noble model of diligent work given to a very difficult subject. And I think every person who has dealt with the life of Columbus since Irving's time, has expressed his gratitude and respect for the author.

According to the custom of biographers, in that time and since, he includes in those volumes the whole history of the West India islands, for the period after Columbus discovered them till his death. He also thinks it his duty to include much of the history of Spain and of the Spanish court. I do not myself believe that it is wise to attempt, in a book of biography, so considerable a study of the history of the time. Whether it be wise or not, I have not attempted it in this book. I have rather attempted to follow closely the personal fortunes of Christopher Columbus, and, to the history around him, I have given only such space as seemed absolutely necessary for the illustration of those fortunes.

I have followed on the lines of his own personal narrative wherever we have it. And where this is lost I have used the absolutely contemporary authorities. I have also consulted the later writers, those of the next generation and the generation which followed it. But the more one studies the life of Columbus the more one feels sure that, after the greatness of his discovery was really known, the accounts of the time were overlaid by what modern criticism calls myths, which had grown up in the enthusiasm of those who honored him, and which form no part of real history. If then the reader fails to find some stories with which he is quite familiar in the history, he must not suppose that they are omitted by accident, but must give to the author of the book the credit of having used some discretion in the choice of his authorities.

When I visited Spain in 1882, I was favored by the officers of the Spanish government with every facility for carrying my inquiry as far as a short visit would permit. Since that time Mr. Harrisse has published his invaluable volumes on the life of Columbus. It certainly seems as if every document now existing, which bears upon the history, had been collated by him. The reader will see that I have made full use of this treasure-house.

The Congress of Americanistas, which meets every year, brings forward many curious studies on the history of the continent, but it can scarcely be said to have done much to advance our knowledge of the personal life of Columbus.

The determination of the people of the United States to celebrate fitly the great discovery which has advanced civilization and changed the face of the world, makes it certain that a new interest has arisen in the life of the great man to whom, in the providence of God, that discovery was due. The author and publishers of this book offer it as their contribution in the great celebration, with the hope that it may be of use, especially in the direction of the studies of the young. 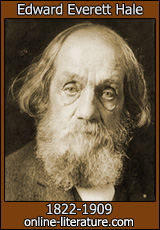