The History of Projects

When I speak of writing a History of Projects, I do not mean either of the introduction of, or continuing, necessary inventions, or the improvement of arts and sciences before known, but a short account of projects and projecting, as the word is allowed in the general acceptation at this present time; and I need not go far back for the original of the practice.

Invention of arts, with engines and handicraft instruments for their improvement, requires a chronology as far back as the eldest son of Adam, and has to this day afforded some new discovery in every age.

The building of the Ark by Noah, so far as you will allow it a human work, was the first project I read of; and, no question, seemed so ridiculous to the graver heads of that wise, though wicked, age that poor Noah was sufficiently bantered for it: and, had he not been set on work by a very peculiar direction from heaven, the good old man would certainly have been laughed out of it as a most senseless ridiculous project.

The building of Babel was a right project; for indeed the true definition of a project, according to modern acceptation, is, as is said before, a vast undertaking, too big to be managed, and therefore likely enough to come to nothing. And yet, as great as they are, it is certainly true of them all, even as the projectors propose: that, according to the old tale, if so many eggs are hatched, there will be so many chickens, and those chickens may lay so many eggs more, and those eggs produce so many chickens more, and so on. Thus it was most certainly true that if the people of the Old World could have built a house up to heaven, they should never be drowned again on earth, and they only had forgot to measure the height; that is, as in other projects, it only miscarried, or else it would have succeeded.

And yet, when all is done, that very building, and the incredible height it was carried, is a demonstration of the vast knowledge of that infant age of the world, who had no advantage of the experiments or invention of any before themselves.

I believe a very diverting account might be given of this, but I shall not attempt it. Some are apt to say with Solomon, "No new thing happens under the sun; but what is, has been:" yet I make no question but some considerable discovery has been made in these latter ages, and inventions of human origin produced, which the world was ever without before, either in whole or in part; and I refer only to two cardinal points, the use of the loadstone at sea, and the use of gunpowder and guns: both which, as to the inventing part, I believe the world owes as absolutely to those particular ages as it does the working in brass and iron to Tubal Cain, or the inventing of music to Jubal, his brother. As to engines and instruments for handicraftsmen, this age, I daresay, can show such as never were so much as thought of, much less imitated before; for I do not call that a real invention which has something before done like it--I account that more properly an improvement. For handicraft instruments, I know none owes more to true genuine contrivance, without borrowing from any former use, than a mechanic engine contrived in our time called a knitting-frame, which, built with admirable symmetry, works really with a very happy success, and may be observed by the curious to have a more than ordinary composition; for which I refer to the engine itself, to be seen in every stocking-weaver's garret.

I shall trace the original of the projecting humour that now reigns no farther back than the year 1680, dating its birth as a monster then, though by times it had indeed something of life in the time of the late civil war. I allow, no age has been altogether without something of this nature, and some very happy projects are left to us as a taste of their success; as the water-houses for supplying of the city of London with water, and, since that, the New River--both very considerable undertakings, and perfect projects, adventured on the risk of success. In the reign of King Charles I. infinite projects were set on foot for raising money without a Parliament: oppressing by monopolies and privy seals; but these are excluded our scheme as irregularities, for thus the French are as fruitful in projects as we; and these are rather stratagems than projects. After the Fire of London the contrivance of an engine to quench fires was a project the author was said to get well by, and we have found to be very useful. But about the year 1680 began the art and mystery of projecting to creep into the world. Prince Rupert, uncle to King Charles II., gave great encouragement to that part of it that respects engines and mechanical motions; and Bishop Wilkins added as much of the theory to it as writing a book could do. The prince has left us a metal called by his name; and the first project upon that was, as I remember, casting of guns of that metal and boring them--done both by a peculiar method of his own, and which died with him, to the great loss of the undertaker, who to that purpose had, with no small charge, erected a water-mill at Hackney Marsh, known by the name of the Temple Mill, which mill very happily performed all parts of the work; and I have seen some of those guns on board the Royal Charles, a first-rate ship, being of a reddish colour, different either from brass or copper. I have heard some reasons of state assigned why that project was not permitted to go forward; but I omit them, because I have no good authority for them. After this we saw a floating-machine, to be wrought with horses, for the towing of great ships both against wind and tide; and another for the raising of ballast, which, as unperforming engines, had the honour of being made, exposed, tried, and laid by before the prince died.

If thus we introduce it into the world under the conduct of that prince, when he died it was left a hopeless brat, and had hardly any hand to own it, till the wreck-voyage before noted, performed so happily by Captain Phips, afterwards Sir William, whose strange performance set a great many heads on work to contrive something for themselves. He was immediately followed by my Lord Mordant, Sir John Narborough, and others from several parts, whose success made them soon weary of the work.

The project of the Penny Post, so well known and still practised, I cannot omit, nor the contriver, Mr. Dockwra, who has had the honour to have the injury done him in that affair repaired in some measure by the public justice of the Parliament. And, the experiment proving it to be a noble and useful design, the author must be remembered, wherever mention is made of that affair, to his very great reputation.

It was, no question, a great hardship for a man to be master of so fine a thought, that had both the essential ends of a project in it (public good and private want ), and that the public should reap the benefit and the author be left out; the injustice of which, no doubt, discouraged many a good design. But since an alteration in public circumstances has recovered the lost attribute of justice, the like is not to be feared. And Mr. Dockwra has had the satisfaction to see the former injury disowned, and an honourable return made, even by them who did not the injury, in bare respect to his ingenuity.

A while before this several people, under the patronage of some great persons, had engaged in planting of foreign colonies (as William Penn, the Lord Shaftesbury, Dr. Cox, and others) in Pennsylvania, Carolina, East and West Jersey, and the like places, which I do not call projects, because it was only prosecuting what had been formerly begun. But here began the forming of public joint-stocks, which, together with the East India, African, and Hudson's Bay Companies, before established, begot a new trade, which we call by a new name stock-jobbing, which was at first only the simple occasional transferring of interest and shares from one to another, as persons alienated their estates; but by the industry of the Exchange brokers, who got the business into their hands, it became a trade, and one perhaps managed with the greatest intrigue, artifice, and trick that ever anything that appeared with a face of honesty could be handled with; for while the brokers held the box, they made the whole Exchange the gamesters, and raised and lowered the prices of stocks as they pleased, and always had both buyers and sellers who stood ready innocently to commit their money to the mercy of their mercenary tongues. This upstart of a trade, having tasted the sweetness of success which generally attends a novel proposal, introduces the illegitimate wandering object I speak of, as a proper engine to find work for the brokers. Thus stock-jobbing nursed projecting, and projecting, in return, has very diligently pimped for its foster-parent, till both are arrived to be public grievances, and indeed are now almost grown scandalous. 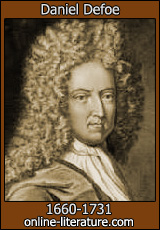