The Origin of Species

Search
Advanced Search
Darwin's theory of natural selection issued a profound challenge to orthodox thought and belief: no being or species has been specially created; all are locked into a pitiless struggle for existence, with extinction looming for those not fit enough for the task. This text reveals the almost unthinkably complex mutual interdependencies between animal and plant life, climate and physical environment, and by implication, the human world.

Recent Forum Posts on The Origin of Species

My father gave me this book as a Christmas present two years ago. It took me quite a while to read through as it's not ideal bedtime reading. These are some of my observations: It's a curious type of book. It's half like a modern pop science like Richard Dawkins might write, half like an academic text. Charles Darwin was very hard working. He may have had the idea twenty years before publishing, but he was not being idle in that time. I think he was trying to answer all the objections to his theory before going public. I doubt he wanted to risk being shot down by a glaring weakness in his theory, especially when it was going to be so controversial. He was very lucky not to be scooped IMO. It is surprising how much he got right, especially on geology. He apparently knew about continental drift and why the process of rock formation would lead to incompleteness in the fossil record. The chapter I had most difficulty with was on crosses and hybrids, some of which are more fertile and some less. He thought that the reason that some distantly related species could cross and produce fertile offspring, while others crosses resulted in infertile offspring (e.g. mules), while others could not cross at all was to do with an incompatibility in their 'organs of reproduction'. This puzzled me. I wondered, "Does he mean the sexual organs don't fit?" Then I remembered that at the time of writing, genes and chromosones had not actually been discovered. There obviously were not as many academics around then, because he often refers to the work of amateur enthusiasts and naturalists. It amused me that even 150 years ago Darwin referred to Malthus, the early economist who predicted that over-population would lead to famine. Every time you read a book about resource depletion, economics or sustainability it refers to Malthus. I was beginning to think that perhaps Darwin wasn't so long ago, but then he referred to an animal called a Quagga. "What's a Quagga?" I thought, and looked it up on the internet. It turned out to be a long extinct relative of the zebra. I was surprised to discover that were a few people who nearly discovered the theory before him. In fact, I am not sure what exactly was the new bit he discovered. One of the final chapters contains what could be described as a literature review. If you ever have to write a literature review at university, I would recommend reading this chapter.

the two ideas can coexist

the theory of evolution is not contrary to religion. those who take the bible too literaly are bound to find more errors in these new science movements but if you approach the bible as you would the asope fables or such things and think of it as a morale guidline then you see they dont contridict. the fact of the matter is during dinosaur time humans did not exist. the fossils we have prove as much. no sign of human life were found until much later. i am a firm catholic but have no problem seeing the 2 coexist. we must have evolved. if not from primates from something else. we must learn to be more flexible and these brilliant ideas would come faster to us! another thought to concider is that while darwin was far ahead of his time he was wrong on many accounts and theories. the evolution theory happens to remain a theory. here is one of my most favored quotes of charles darwin in the origin of species: "when i view all beings not as special creations, but as the lineal descendants of some few beings which lived long before the first bed of the cambrian system was deposited, they seem to me to become ennobled." i love the evolution theory and these types of debates. just thought id say what my opinion was and id love to have replies!:D

Science vs. Religion Who wins? Maybe neither

A very intriguing subject, but Darwin probably didnt know what he was getting himself into. In fact, he probably just wrote stuff down to fool around with all of us. And Albert Einstein said: Science without religion is blind; religion without science is lame. Or something like that.

Darwin's theory was so picturesquly written in ORIGIN OF SPECIES that we still read it with great joy an energy.

"Anonymous" here has asked for tolerance between creationists and evolutionists.

I think Anonymous's treatment of people's beliefs, though perhaps kind, is unfortunately naive. There isn't really room for all of us if what s/he means is we should accept that God and evolution are in this universe together. Many people, including many scientists, undoubtedly hold this view, but "Simon james" can't accept the compromise any better than "Jennifer" can. And they shouldn't, because too many crucial aspects of life are based on it. Is there a God who looks on abortion as murder? Do husbands have the divine right to lead their households? Should we elect a president who doesn't believe in God? These things are too important for Jennifer and Simon james to compromise. Someone who firmly believes that God created man in the image of Himself can't possibly accept that chimpanzees and humans once interbred, and someone who believes that unaided evolution is the only source of life in the universe can't possibly accept that any particular religious values are inherently "good" or mandatory.

By the way, I find it funny that Jennifer railed at Jesus-fish creationists even though Simon james never said he was a Christian, and then tolerant Anonymous railed at scientists even though Jennifer never even hinted she was a scientist. Why the crappy polemics?

And P.S.: Sadly, it does look like Simon james quoted out of context.

Isn't it funny how he writes in chapter 14 "On the...view of the independent creation of each being, we can only say that so it is; that it has pleased the Creator to construct all the animals and plants in each great class on a uniform plan.."
Darwin, who gave root to these evolutionary theories which condradict the presence of God, actually backs him up! This is evdience that Darwin understood that what he wrote was ONLY a theory...

For everyone: If you'd like the essential arguments without having to read the entire work, try Chapter 15.

For religious people making feeble attempts to discredit the theory of evolution: Congratulations on your "theory" victory! Yes, evolution is only a theory, and at the time of its introduction, Darwin had--relative to now--scant evidence to support it. But before rejoicing just yet, please bother to take into account the 144-years'-worth of spectacularly compelling evidence observed and recorded by hundreds of thousands of people since the theory's introduction. The merit of a theory, after all, is based not only on the evidence present at the time of its publication but on every piece of evidence found thereafter. If your religion is so unfortunate as to need the theory of evolution to be false, it's a wonder it survived the theory that the earth revolves around the sun. Or did it?

TOTAL DISHONESTY!!! (the comments, not the book itself)

Certain jesus-fish-toting creationists are trying to mislead people by quoting chapter 14 out of context. Please read the replies to their comments, or read chapter 14 and judge for yourself.

And hey--creationists! Thou shalt not bear false witness against a book just because it showeth that Genesis is a load of crap.

I am 17 and I am reading Origin of the Species for school. Before I read it I was lead to understand that Darwin was pointing out all of the faults of the creation theory (which I believe to be true) and saying why by backing it up with his evolution theory. I may be mistaken but I saw only maybe two instances where Darwin said the Creation theory was false. Nowhere does he say he is trying to replace the Creation theory and I think he lacked the evidence the same as we lack the evidence to uphold the evolution theory today.
Before I read the book I believed in Creation and after reading the book he failed to even budge me off of my position although I admit he made some very good points. An example on why he failed to change my position is shown on Page 182 when Darwin discusses man and beauty, 'it ought to be shown that before man appeared, there was less beauty on the face of the earth' That to me is an odd statement wouldn't the world be more serene, beautiful and peaceful without all of man's inventions and our destructive habits?
Another point that raised my eyebrows and which I will focus a part of my essay on is in his chapter the Geological Record. Darwin's friend Sir Charles Lyell asserted that 1,000 feet of solid rock would be disintegrated over a course of 6 million years. I am not disputing how accurate or not this is, but how can you honestly figure out how long it took for a certain piece of land to erode. Lets say for example the beaches near my house erode 3 inches (of sand) a year on average. If a tsunami comes obviously a lot more sediment and rock will be eroded away. The Cliffs of Dover for example I believe a huge chunk of rock broke away from that. In no way in my opinion can you ACCURATELY find out how fast (or slow) water erodes rock. I could expand a lot more, but obviously you can see what i am getting at.

Post a New Comment/Question on The Origin of Species

Here is where you find links to related content on this site or other sites, possibly including full books or essays about Charles Darwin written by other authors featured on this site. 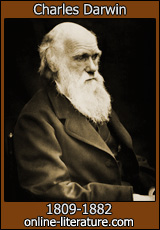