JIKKI HAS A WISH GRANTED.


Next morning Aunt Rivette summoned Jikki to her room, and said:

“Take these shoes and clean and polish them; and carry down this tray of breakfast dishes; and send this hat to the milliner to have the feathers curled; and return this cloak to the Princess Fluff, with my compliments, and say I’m much obliged for the loan of it.”

Poor Jikki hardly knew how to manage so many orders. He took the shoes in his left hand, and the tray of dishes he balanced upon the other upraised palm. But the hat and cloak were too many for him. So Aunt Rivette, calling him “a stupid idiot,”—probably because he had no more hands,—set the plumed hat upon Jikki’s head and spread the cloak over his shoulders, and ordered him to make haste away.

Jikki was glad enough to go, for the fluttering of Aunt Rivette’s wings made him nervous; but he had to descend the stairs cautiously, for the hat was tipped nearly over his eyes, and if he stumbled he would be sure to spill the tray of dishes.

He reached the first landing of the broad stairs in safety, but at the second landing the hat joggled forward so that he could see nothing at all, and one of the shoes dropped from his hand.

“Dear me!” sighed the old man; “I wonder what I shall do now? If I pick up the shoe I shall drop the dishes; and I can’t set down this tray because I’m blinded by this terrible hat! Dear—dear! If I’m to be at the beck and call of that old woman, and serve the new king at the same time, I shall have my hands full. My hands, in fact, are full now. I really wish I had half a dozen servants to wait on me!”

Jikki knew nothing at all about the magic power of the cloak that fell from his shoulders; so his astonishment was profound when some one seized the shoe from his left hand and some one else removed the tray from his right hand, and still another person snatched the plumed hat from his head.

But then he saw, bowing and smirking before him, six young men, who looked as much alike as peas in the same pod, and all of whom wore very neat and handsome liveries of wine-color, with silver buttons on their coats.

Jikki blinked and stared at these people, and rubbed his eyes to make sure he was awake.

“We are your half a dozen servants, sir,” answered the young men, speaking all together and bowing again.

Jikki gasped and raised his hands with sudden amazement as he gazed in wonder upon the row of six smart servants.

“But—what—are you doing here?” he stammered.

“We are here to wait upon you, sir, as is our duty,” they answered respectfully.

Jikki rubbed his left ear, as was his custom when perplexed; and then he thought it all over. And the more he thought the more perplexed he became.

“I don’t understand!” he finally said, in a weak voice.

“You wished for us, and here we are,” declared the six, once more bowing low before him.

“I know,” said Jikki. “But I’ve often wished for many other things—and never got a single one of the wishes before!”

The young men did not attempt to explain this curious fact. They stood in a straight row before their master, as if awaiting his orders. One held the shoe Jikki had dropped, another its mate, still another the plumed hat, and a fourth the tray of dishes.

“You see,” remarked Jikki, shaking his head sadly at the six, “I’m only a servant myself.”

“You are our master, sir!” announced the young men, their voices blended into one.

“I wish,” said Jikki, solemnly, “you were all back where you came from!” And then he paused to see if his wish also would be fulfilled. But no; the magic cloak conferred the fulfilment of but one wish upon its wearer, and the half a dozen servants remained standing rigidly before him.

Jikki arose with a sigh.

“Come downstairs to my private room,” he said, “and we’ll talk the matter over.”

So they descended the grand stairway to the main hall of the grand palace, Jikki going first and his servants following at a respectful distance. Just off the hall Jikki had a pleasant room where he could sit when not employed, and into this he led the six.

After all, he considered, it would not be a bad thing to have half a dozen servants; they would save his old legs from many a tiresome errand. But just as they reached the hall a new thought struck him and he turned suddenly upon his followers:

“See here!” he exclaimed. “How much wages do you fellows expect?”

“We expect no wages at all, sir,” they answered.

“What! nothing at all!” Jikki was so startled that he scarcely had strength remaining to stagger into his private room and sink into a chair.

“No wages! Six servants, and no wages to pay!” he muttered. “Why, it’s wonderful—marvelous—astounding!”

Then he thought to himself: “I’ll try ’em, and see if they’ll really work.” And aloud he asked:

“How can I tell you apart—one from another?”

Each servant raised his right arm and pointed to a silver badge upon his left breast; and then Jikki discovered that they were all numbered, from “one” up to “six.”

“Ah! very good!” said Jikki. “Now, number six, take this shoe into the boot-room, and clean and polish it.”

Number six bowed and glided from the room as swiftly and silently as if he were obeying a command of the King of Noland.

“Number two, take this to the milliner in Royal Street, and have the feathers curled.”

Number two bowed and departed almost before the words had left Jikki’s mouth; and then the king’s valet regarded the remaining three in some perplexity.

“Half a dozen servants is almost too many,” he thought. “It will keep me busy to keep them busy. I should have wished for only one—or two at the most.”

Just then he remembered something.

“Number four,” said he, “go after number two and tell the milliner that the hat belongs to Madam Rivette, the king’s aunt.”

And a few moments later, when the remaining two servants, standing upright before him, had begun to make him nervous, Jikki cried out:

“Number three, take this other shoe down to the boot-room and tell number six to clean and polish it also.”

This left but one of the six unoccupied, and Jikki was wondering what to do with him when a bell rang.

“I am not the king’s servant; I am here only to wait upon you,” said number one, without moving to answer the bell.

“Then I must go myself,” sighed the valet, and rushed away to obey the king’s summons.

Scarcely had he disappeared when Tollydob, the lord high general, entered the room and said in a gruff voice:

Number one, standing stiffly at one end of the room, made no reply.

“Answer me, you scoundrel!” roared the old general. “Where’s Jikki?”

Still number one stood silent, and this so enraged old Tollydob that he raised his cane and aimed a furious blow at the young man. The cane seemed to pass directly through the fellow, and it struck the wall behind so forcibly that it split into two parts.

This amazed Tollydob. He stared a moment at the silent servant, and then turned his back upon him and sat down in Jikki’s chair. Here his eyes fell upon the magic cloak, which the king’s valet had thrown down.

Tollydob, attracted by the gorgeous coloring and soft texture of the garment, picked up the cloak and threw it over his shoulders; and then he walked to a mirror and began admiring his reflection.

While thus engaged, Jikki returned, and the valet was so startled at seeing the lord high general that he never noticed the cloak at all.

“His Majesty has asked to see your Highness,” said Jikki; “and I was about to go in search of you.”

“I’ll go to the king at once,” answered Tollydob, and as he walked away Jikki suddenly noticed that he was wearing the cloak. “Oho!” thought the valet, “he has gone off with the Princess Fluff’s pretty cloak; but when he returns from the king’s chamber I’ll get it again and send number one to carry it to its rightful owner.” 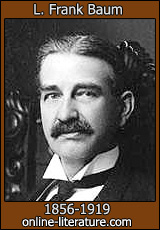