Arthur B. Reeve (1880-1936), American author of mystery/detective novels, wrote the Professor Craig Kennedy series including Craig Kennedy Listens In (1923). Kennedy's Dr.Watson-like sidekick is newspaper reporter Walter Jameson. Reeve was one of the first authors to combine an element of science into the mystery genre, widely read in North America and Britain.

Arthur Benjamin Reeve was born on 15 October, 1880, in Patchogue, New York State, the son of Jennie née Henderson, and Walter F. Reeve. He graduated from Princeton University in 1903. Though he went on to study at the New York Law School and never practiced, he used a great amount of his knowledge in his later works. He wrote a series of scientific articles for a journal, and there began his interest in science, fiction and a career in writing.

In 1906, at the age of twenty-six, Reeve married Margaret Allen Smith, with whom he'd have two sons and one daughter. The Black Hand and The Deadly Tube were published in 1911, The Poisoned Pen and The Silent Bullet in 1912. Guy Garrick and The Dream Doctor followed in 1914. During World War I, Reeve helped establish the anti-espionage Detection Laboratory in Washington D.C. for the federal government, before the FBI was born.

The Gold of the Gods, The War Terror and The Exploits of Elaine were published in 1915. Reeve wrote the screenplays for the Elaine series of stories that were made into successful silent serial films in 1916 by Pathé Pictures. Constance Dunlap and The Ear in the Wall followed in 1916. The Treasure-Train was published in 1917 and The Film Mystery in 1921.

Craig Kennedy is a professor of chemistry at a University in New York City who battles crime with his deductive powers and scientific genius. His travails are rife with various gadgets and inventions of his own making that assist in his work, including sophisticated phone devices, a fisheye keyhole spying device, portable lie detectors, and a machine that can apparently revive the recently dead. Walter Jameson is his room mate and reporter for the New York Star. A television series was produced in 1952 based on Kennedy.

Reeve wrote a series of articles and a radio program on crime prevention in 1930. He covered the Lindbergh kidnapping trial for a Philadelphia newspaper in 1935, and he co-wrote the film script for The Master Mystery movie, starring Harry Houdini (1919). Arthur B. Reeve died on 9 August, 1936, in Trenton, New Jersey, USA of complications from asthma.

Forum Discussions on Arthur B. Reeve

Two questions. The first is, are there any other readers or potential readers of Arthur B. Reeve out there? The second is does anyone know anything about a book Reeve wrote in the nineteen thirties, called, I believe, THE STARS SCREAM MURDER?...

Posted By factferret in Reeve, Arthur B. || 0 Replies 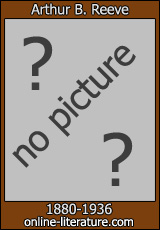 Fiction
Quizzes on Arthur B. Reeve

Related links for Arthur B. Reeve

Here is where you find links to related content on this site or other sites, possibly including full books or essays about Arthur B. Reeve written by other authors featured on this site.