Aristophanes (c.448 B.C.–c.388 B.C), Greek playwright and comic poet, whose surviving plays are the only extant examples of Greek Old Comedy. Exact details of his birthplace and life are not known, but most likely he was educated in and lived in Athens. Besides his many dramatic works, much poetry is attributed to him.

The eleven surviving plays by Aristophanes are: (Greek, then Latin titles are given in brackets. Dates are approximate):


Many of Aristophane's rollicking comedies were written for and performed during the religious festivals Dionysia and Lenea. The Acharnians (425) was one of many to win him first prize. The Knights (424), with Aristophanes himself acting as Cleon, is a controversial and unapologetic attack of the demagogue Cleon. The Clouds (423) critical of the Sophists, contains the famous scene of the Just and the Unjust argument, the cloud-maidens representative of metaphysical meanderings. It was followed by Peace (421).

Inspired by the Peloponnesian War, The Birds (414) features the elaborately feathered Pisthetairos and Euelpides, who contrive to create Cloud-cuckoo-town amongst various bawdy and sardonic criticisms of religion, law, and education. Lysistrata (411) leads the women in barricading the Akropolis, and they withhold their affections to their men until they stop making war. Speaking to the Magistrate of the women left behind after the deaths of their husbands and lovers she states;

"Grey though he be when he comes from the battlefield, still if he wishes to marry, he can. Brief is the spring and the flower of our womanhood, once let it slip, and it comes not again; Sit as we may with our spells and our auguries, never a husband will marry us then."

In The Frogs (405), the Greek God Dionysus, accompanied by his servant Xanthias, travels to the underworld.. "And tell me this: of all the roads you know, which is the quickest way to get to Hades? I want one not too warm, nor yet too cold." to oversee a contest between Euripides and Æschylus. The Ecclesiazusae, or The Women in Politics (c.392) again features women involving themselves in politics and democratic process. Plutus (388) is a politicized satire of the very people who would have seen its production, the wealthy and aristocratic, and features the bumbling Chremylos and his slave Cario.

Aristophanes captured the spirit of the Republic in decline.. the debauchery, the corruption, the wars, and the human foibles, often in outlandish exaggerated detail. Even in the 21st century his profound influence on the arts is evident in the numerous theatrical and screen adaptations of his works.

Drawing on Aristophanes in My Memoirs

I am conscious of what the writer and philosopher H.L. Mencken wrote about autobiography, namely, that no man can bring himself to reveal his true character, and, above all, his true limitations as a citizen and as a believer, his true meannesses, his true imbecilities, to his friends or even to his wife. She, like servants of old, though, are most likely to see the true colours of a man or a woman. Honest autobiography, Mencken wrote, is a contradiction in terms. All writers try to guild and fresco themselves. There may be some guilding here, but I think I make an improvement on most biographies which A.J. P. Taylor said were mostly guesswork. There is a tone of tentative enquiry in ...

Hiya. I've got a drama exam coming up and ive chosen to perform an extract from Lysistrata. love the play but i just can't work out which part to do. It needs to be about 20-30 mins long and have even parts for 2 female and 1 male characters. I was thinking of act 2 scene 1 but im jst not sure. If anyone who knows the play has any good ideas, that would be incredible. byee for now....

Posted By mingdamerciless in Aristophanes, || 6 Replies 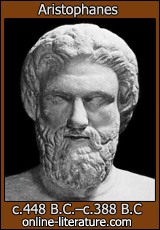 Here is where you find links to related content on this site or other sites, possibly including full books or essays about Aristophanes written by other authors featured on this site.